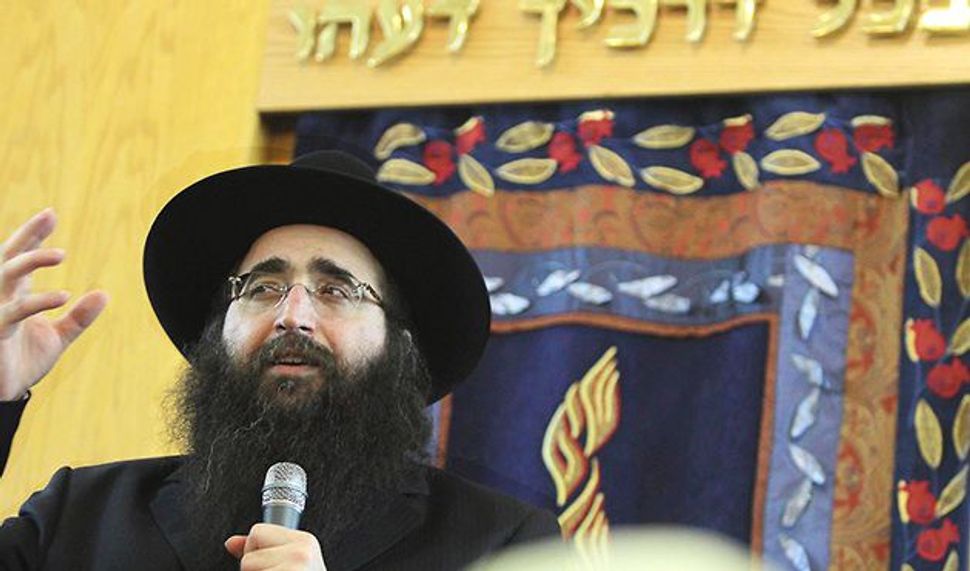 Tangled Case: The head of a prestigious Israel police unit is suspected of accepting bribes from Rabbi Pinto and his disciples. Image by Haaretz

(Haaretz) — The Justice Ministry department that investigates police misconduct is investigating the head of one of the police’s most prestigious units on suspicion of taking bribes from Rabbi Yoshiyahu Pinto and from businessmen who are disciples of the rabbi.

The investigative material in the case has been given to Attorney General Yehuda Weinstein, as well as to Pinto’s lawyers. The suspect is Maj. Gen. Menashe Arviv, the head of Lahav 433, a unit popularly known as the Israeli FBI. This department includes the fraud squad, the serious and international crimes unit and the financial investigations unit.

The case began in May 2011, when Arviv was appointed Israel’s police attaché in the United States. At that time, Israeli and American police were conducting a joint investigation into Pinto in connection with a nonprofit organization called Hazon Yeshaya, which he headed.

While serving in this position, Arviv developed connections with many influential Israelis, including businessman Ben Zion Suky, who lives in Manhattan and is one of Pinto’s disciples. Police now suspect that Suky and Arviv, with Pinto’s knowledge, developed a relationship in which Suky gave Arviv and his family various benefits. This was not a one-time event, but something that occurred repeatedly over the course of years.

While Arviv was still in the United States, Lahav 433 — the unit he now heads — arrested Pinto and his wife on suspicion of trying to bribe another police officer, Ephraim Bracha. The Pintos were arrested on October 2012 on the basis of evidence that they had given Bracha 200,000 shekels ($57,000) in exchange for information about the Hazon Yeshaya investigation.

Pinto claimed that Bracha was one of his disciples, and that he often gave the officer money to help him and his family. But while police don’t deny that Bracha was one of Pinto’s disciples, they insist he remained loyal to the police, and the moment he understood that the money was meant as a bribe, he reported it to the then-head of the investigations and intelligence department, Maj. Gen. Yoav Segalovich. It was that report that led to Pinto’s arrest.

But Pinto stuck to his story, and even expanded on it: He said he had told the FBI — which had questioned the rabbi as a witness in an investigation involving a U.S. congressman — that he regularly gave money to a senior Israeli police officer, and that he had even named Bracha as the recipient. He said he also told the FBI that another Israeli police officer, of even higher rank than Bracha, knew about these money transfers. That officer, Pinto said, was Arviv, who also allegedly received various benefits from him.

At this point, the law enforcement agencies decided to freeze the planned indictment against Pinto for attempting to bribe Bracha until the rabbi’s allegations about Arviv could be investigated. Nevertheless, these allegations so far haven’t resulted in any changes to the bribery case: None of the new evidence to date has undermined the thesis that the money given Bracha was an attempted bribe.

The material given to Weinstein included various receipts linking Arviv to the alleged receipt of benefits.

On Wednesday evening, Channel 10 television reporter Baruch Kra reported on a polygraph test of Pinto commissioned by the rabbi himself. The transcript is as follows:

Did you give Ephraim Bracha money, gifts and personal favors due to ties of friendship over the last few years?
Yes.
Were you lying when you told a senior officer in real time that you gave money to Bracha as charity?
No.
Were you lying when you said you asked Bracha to report to his superiors, and especially Yoav Segalovich, about the personal relationship between you?
No.
Did you give Bracha money so that he would intervene on your behalf in the Hazon Yeshaya investigation, or in any other investigation?
No.
In exchange for the money, did you also demand confidential information about the Hazon Yeshaya investigation?
No.

The results of the test indicated that Pinto did not appear to be lying in his answers to any of these questions. As noted, however, the test was commissioned by Pinto himself.

Pinto and his lawyers are trying to show that the money given Bracha wasn’t a bribe and wasn’t anything unusual. Pinto has also claimed, correctly, that many officers besides Bracha maintained ties with him and sometimes asked him for help, which he gave.

In a message to his followers, Pinto said on Wednesday that better times — “days of blessing, flourishing, success and salvation” — were in the offing. “This ugly time that has been forced on us happened through no fault of our own, solely due to the narrow and cruel considerations of various parties that make use of intimidation, harassment and various types of abuse,” the statement said.

Pinto is expected to return to Israel this weekend.