Canadian Prime Minister Stephen Harper Is One of Israel’s Strongest Backers — But Why? 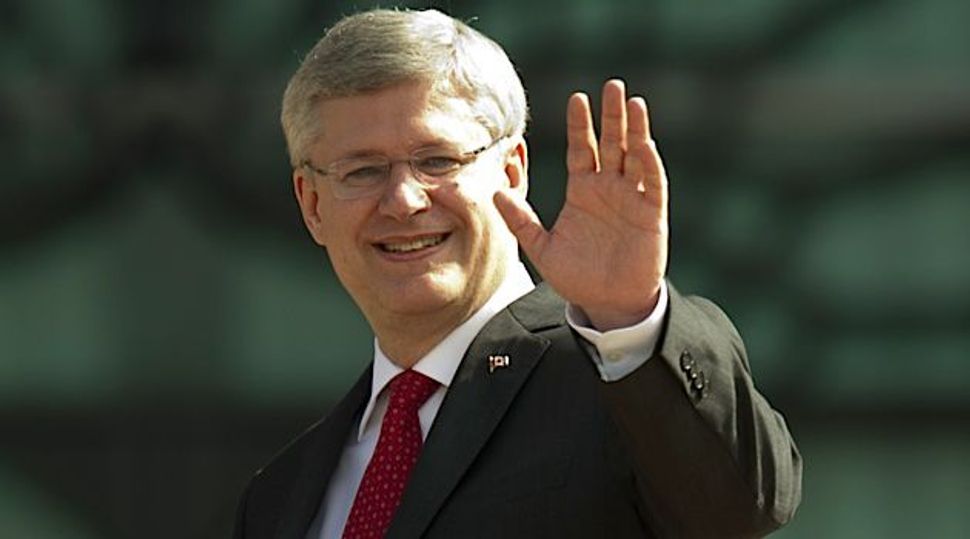 (JTA) — It took seven years, but one of Israel’s staunchest allies among world leaders will be making his maiden voyage to the Jewish state on Sunday.

In announcing the trip last month at a Jewish National Fund dinner, where he was being honored, Canadian Prime Minister Stephen Harper called Israel “a light of freedom and democracy in what is otherwise a region of darkness” and pledged that the Jewish state “will always have Canada as a friend.”

Since his election in 2006, the Conservative prime minister has been full throated, unapologetic and seemingly indifferent to consequence in his support for Israel.

Harper was the first Western leader to cut aid to the Palestinian Authority following Hamas’ 2006 seizure of power in Gaza and the first to withdraw from the second U.N. World Conference Against Racism, known as Durban II, saying the event would “scapegoat the Jewish people.”

Canada has sided openly with Israel in every one of its military operations since 2006. Harper’s Israeli counterpart, Benjamin Netanyahu, calls him Stephen, and the two speak regularly. And earlier this month, Harper appointed Vivian Bercovici, a Toronto lawyer and an outspoken Israel supporter, as Canada’s ambassador to Israel.

Harper has backed Israel with such fervor that some scholars and diplomats “rank it as the most dramatic shift in the history of postwar Canadian foreign policy,” according to journalist Marci McDonald’s 2011 book, “The Armageddon Factor: The Rise of Christian Nationalism in Canada.”

The jolting change has left many of Canada’s 375,000 Jews swooning following decades in which Ottawa sought a more neutral posture toward Israel. And they have repaid the good will: Polls showed that for the first time, more than half of Canadian Jews (52 percent) voted for Harper’s Tories in the 2011 election, a historic departure from their traditional base in the Liberal Party.

Observers agree that Harper, an evangelical Christian, stands to gain little by supporting Israel and in fact may be paying a price. Canada failed in its 2010 bid for a seat on the U.N. Security Council for the first time, a result some attributed to its foreign policy in general and support for Israel in particular.

Politically, Harper also has little to gain and much to lose. The shift in Jewish voting has helped Conservatives only in about 10 of Canada’s 308 electoral districts, though Jewish voters in three key Toronto-area districts helped replace Liberal members of parliament with Conservatives, two of whom are Jewish themselves. Among Muslims, a community roughly triple the size of Jews in Canada, Harper won a meager 12 percent in the last election.

“I do think his support for Israel is a principled one because he will stand to lose more non-Jewish votes than gain Jewish ones by his forthright defense of the country,” said Henry Srebrnik, who got to know Harper when he taught at the University of Calgary in the early 1990s and Harper represented the city in the House of Commons. “I doubt there was any sudden epiphany when it comes to Israel, but more likely a growing, and probably somewhat religiously based, admiration for the Jewish state.”

Harper is Canada’s first evangelical prime minister in 50 years, and most observers accept that his faith plays some role in his support for Israel. Toronto Rabbi Philip Scheim, who will accompany Harper to Israel, dismissed the notion that Harper’s support for Israel is part of an “end-of-days, apocalyptic scenario.”

“I sense that he sees Israel as a manifestation of justice and a righting of historical wrongs, especially in light of the Holocaust,” Scheim said.

In speeches and interviews, Harper has credited his late father, a teetotaling accountant who raised his son in the mainline liberal United Church of Canada, with being his greatest influence. Joseph Harper spoke favorably of the Jewish people, teaching his three sons of the Jews’ biblical status as the chosen people and that in the wake of the Holocaust, they deserved kindness.

According to McDonald’s book, the younger Harper shifted to evangelicalism after being encouraged to read the works of Christian thinkers C.S. Lewis and Malcolm Muggeridge. He joined the Christian and Missionary Alliance, an evangelical denomination headquartered in Colorado that stresses the authority of the Bible and the physical healing powers of Jesus but does not have an especially strong Zionist component.

McDonald paints an alarming picture of a right-wing, Christian takeover of Canadian politics. Others aren’t convinced.

“I haven’t seen signs that [Harper] is motivated all that strongly by anything distinctively Christian,” said John Stackhouse, a theology professor at Regent College in Vancouver and one of Canada’s top watchers of evangelicals. “On two of the main issues from his purported religious constituency – namely abortion and homosexuality – he has done next to nothing and prevented others, actually, from doing anything.”

Harper was exposed to Middle East policy issues when he was first elected to Parliament in 1993 under the banner of the Western-based, populist Reform Party, many of whose members were pro-Israel evangelicals who saw Israel as an oasis of democracy surrounded by dictatorships.

The Reform Party begat the short-lived Canadian Alliance, which Harper led briefly before all right-leaning parties were united in the current Conservative Party of Canada. But in its three years of existence, the Canadian Alliance worked to broaden its base by forging close ties with the Jewish community – notably B’nai Brith Canada, according to Lloyd Mackey’s book “The Pilgrimage of Stephen Harper.”

Norman Spector, who served as Canada’s ambassador to Israel from 1992 to 1995 under Prime Minister Brian Mulroney, offers a simple reason for Harper’s pro-Israel stance.

“I think it’s simply that he is an intelligent man who has read widely and thought deeply about the issue,” Spector said.

Canadian Prime Minister Stephen Harper Is One of Israel’s Strongest Backers — But Why?