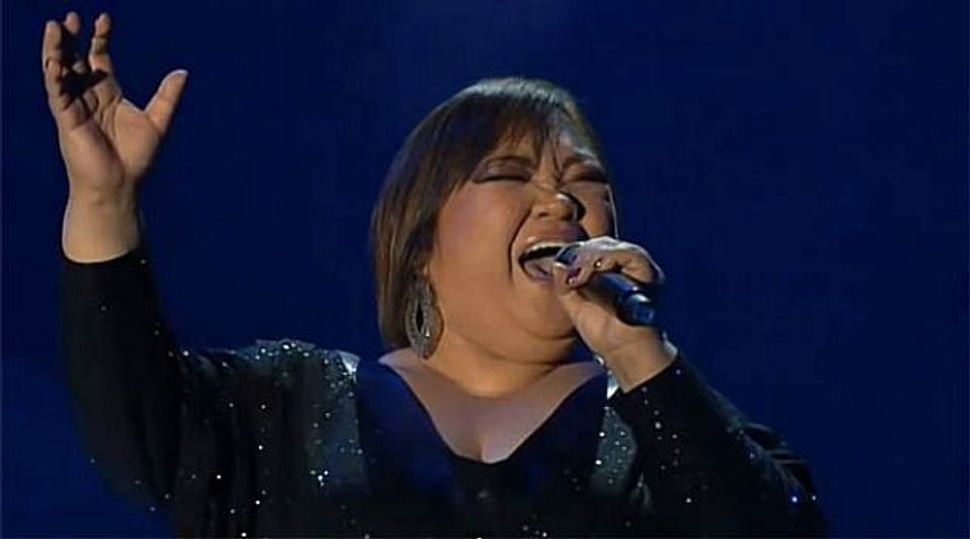 (JTA) — Rose Fostanes, the Filipina caregiver who won Israel’s “X Factor,” better not give up her day job yet.

That’s because her work visa only allows her to be a caretaker. If she makes money working in any other field, even on her own time, she could be in big trouble with Israeli authorities. Deportable trouble.

“Under no circumstance can Rose be paid to be a singer in Israel,” an unnamed source at Israel’s Population, Immigration and Border Authority told Ynet. “There’s no problem if she performs at weddings for free, but she cannot receive any payment.”

That throws the bureaucratic equivalent of a pail of cold water on Fostanes’ dreams of stardom and financial independence.

“I think people should vote for me because I really need this badly. And because of you, because of your vote, maybe my life can change,” she said prior to the public voting. “When I was young, I’m dreaming to be a singer and please don’t let my dream end.”

Prior to Tuesday night’s finals show, Fostanes was reunited with her sister, Nancy, and her girlfriend of 30 years, Mel.

While Fostanes’ tragic back story, including becoming the caregiver for her two younger sisters at the age of 15, captivated the hearts of many Israelis up until and including the finals, the day after found many viewers complaining that an Israeli citizen did not win the competition,

Indeed, Fostanes did not sing a single word in Hebrew throughout the show’s three-month run. By the same token, however, most of the contestants sang the majority of their songs in English, mostly American chart-toppers.

“Rose didn’t sing a single word in Hebrew, yet the entire nation voted for her because she is simply a tremendous singer. She is a tremendous personality; she came here to do what no one else is willing to do. She has contributed to the country, she deserved to win,” her X-Factor mentor Shiri Maimon, an Israeli pop singer, said, according to Ynet.

Some 20,000 Filipinos work in Israel, most as caregivers. In fact, the word “Filipini” is often used in place of caregiver.

Those who are complaining that an Israeli did not win “X Factor Israel,” will be happy to know that second-place winner Eden Ben Zaken has already signed a record deal, and third-place winner Ori Shakiv has already released his first original single.