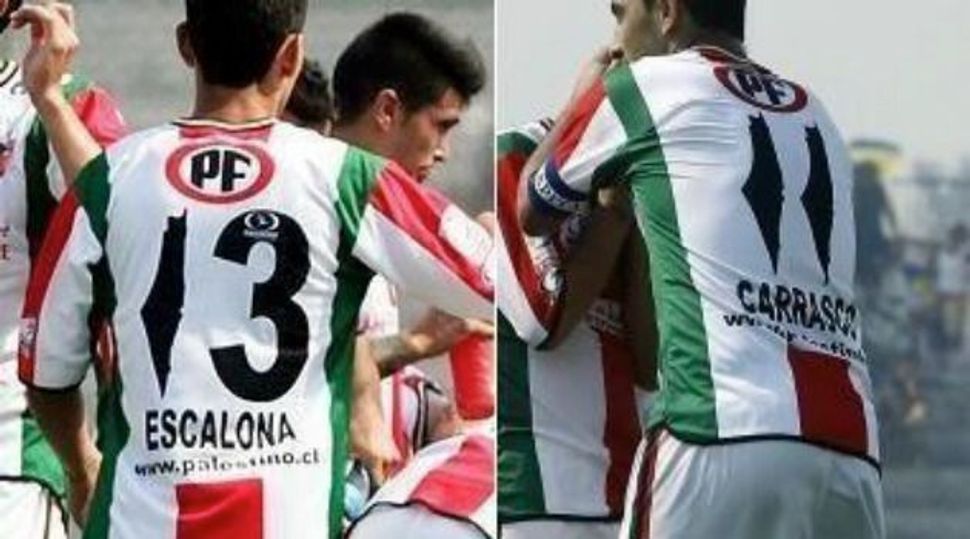 Chile’s top soccer league has penalized the Palestine Football Club with a fine after playing in three official matches wearing uniforms showing the entire map of Israel as Palestine.

On Monday, the National Association of Professional Football of Chile, or ANFP, by unanimous decision penalized the soccer team, which was founded in 1920 by Palestinian immigrants to Chile, some $1,300 for having the map on the back of the jerseys in place of the numeral 1. The ANFP also ruled that the team must redesign the uniforms to include numerals for player numbers.

The ANFP said it had decided to punish the Palestine team because it was opposed to “any form of political, religious, sexual, ethnic, social or racial discrimination.”

The decision came after a request by Patrick Kiblisky Fried, president of the of Chile’s Deportivo Ñublense S.D.A.P club, which plays in the same league. Kiblisky Fried is Jewish. The Jewish community of Chile, and Jewish leaders globally, also had denounced the use of the map of Israel on the uniforms.

The shirts debuted on Jan. 4 in the first match of the season, against the the Chilean Everton team, which the Palestine team won. Three days later the director general for the Latin America branch of the Israeli Foreign Affairs Ministry, Itzhak Shoham, summoned the trade representative from the Chilean Embassy in Israel, Oscar Alcamán, to express his “surprise and concern” over the new uniform.

“While Israel is striving to generate a positive environment to advance towards a two-state solution, it seems inappropriate to use sport for political ends,” said Shoham following the meeting, adding that the Israeli government hoped for a quickly intervention by local sporting authorities to repair the issue.

“You cannot make a political claim and import the Middle East conflict using the platform of football, using the sport to lie and hate.” Gerardo Gorodischer, president of Chile’s Jewish community responded. He also demanded an apology from the Santiago-based team, whose name in Spanish is Club Deportivo Palestino.

“The leaders of the Jewish Community of Chile have always spoken of peace, inviting the Palestinian community as a whole to rebuild the positive relationship that the first immigrants from both communities used to have when they first came to Chile. But in the meantime, as we experience constant defamation by the local Palestinian leadership, we won’t just stand passively and watch.” Maximiliano Grass, director of the Chile Israel Council, the Zionist Federation of Chile, told JTA after the decision.

The Palestinian community in Chile is believed to be the largest outside of the Middle East. At least 300,000 Chileans are of Palestinian descent, according to reports.

Palestino’s next match will be on Jan. 26 against Universidad de Concepcion; the team will play Ñublense on April 13.

Fernando Aguad, president of Deportivo Palestino, said following the decision: “We accept the resolution and we will change our uniform.”

The club must pay the fine to the soccer federation within three days.