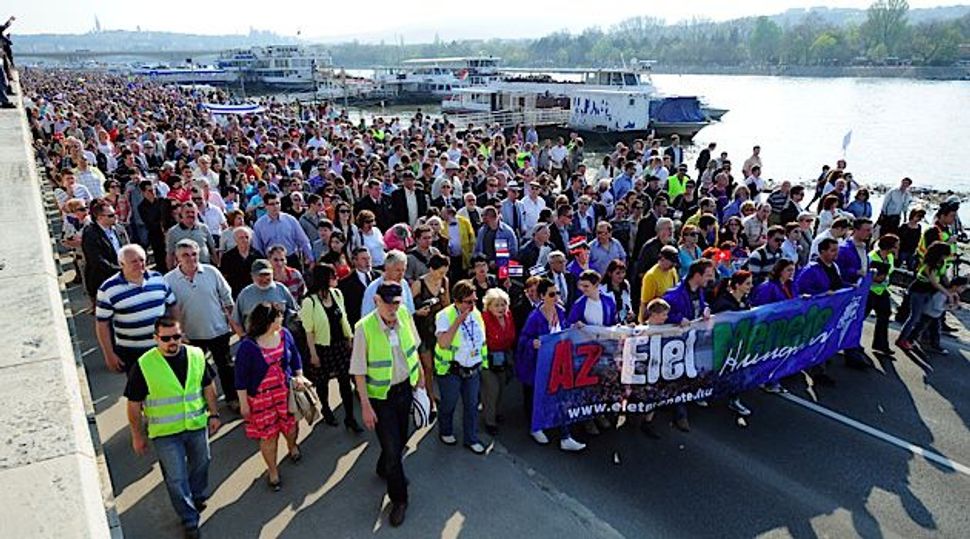 Members of the Hungarian Jewish community march in commemoration of the Holocaust. The country, however, has recently moved away from honestly reporting its involvement in the Shoah. Image by getty images

The action is a protest against what he called the government’s falsification of Holocaust history and attempts to whitewash Hungary’s role in the Holocaust.

The Hungarian state news agency MTI on Sunday quoted a letter from Braham, 91, in which the Bucharest-born scholar, a Holocaust survivor and expert on the Holocaust in Hungary, said he was handing back the Cross of the Order of Merit “with a heavy heart” following recent developments in Hungary. He also said he would no longer permit the Budapest Holocaust Memorial Center to use his name for one its research departments.

Braham, an emeritus professor at the City University of New York, wrote in the letter that: “The campaign of history falsification which aims to whitewash the (Miklos) Horthy era, has shocked me.” Horthy led Hungary into World War II as a Nazi ally.

Braham said the “last straw” had been the decision by the government to erect a memorial in downtown Budapest to the 1944 German occupation of Hungary. This, he said, was a “cowardly attempt” to exonerate Hungarians from their own role in the Holocaust and confuse the issue by placing all blame on the Nazis.

Hungarian Jewish leaders, historians and others have sharply criticized plans for the memorial.

“The events of 1944 are, to say the least, more complicated than a story of ‘bad’ Germans fighting ‘good’ Hungarians,” the prominent historian Krisztian Ungvary wrote in the HVG.hu news magazine. “Eichmann himself was thrilled by his experiences here, observing that the Hungarians must surely be descended from the Huns since nowhere else had he seen so much brutality ‘in the course of solving the Jewish question.’”

Hungary’s conservative government, headed by Prime Minister Viktor Orban, has designated 2014 as Holocaust Memorial Year, with a series of events and initiatives planned.

In October, Hungarian Deputy Prime Minister Tibor Navracsics told an international conference that the country’s leaders recognized Hungarian involvement in the Holocaust and vowed that the state will combat anti-Semitism and racism. Hungary’s ambassador to the United Nations made a similar statement last week.