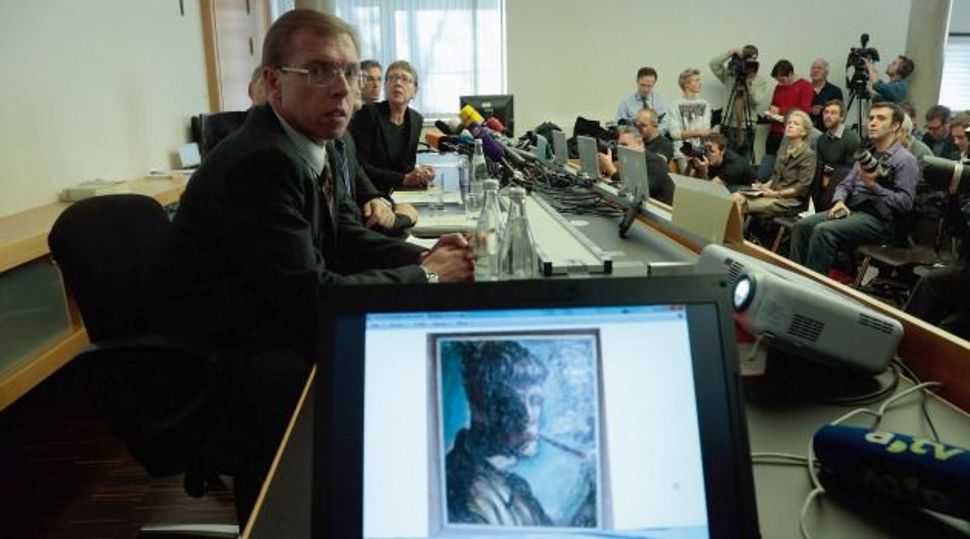 Art historian Meike Hoffmann speaks to the media regarding the seizure in 2011 of 1,500 paintings from Cornelius Gurlitt in Germany. Image by Getty Images

The lawyer of a German recluse who hoarded a trove of Nazi-looted art said on Tuesday he was still waiting for German authorities to provide “clear evidence” that the paintings had been stolen.

Hannes Hartung said his client was prepared for a “fair and open dialogue” with claimants searching for looted works, but that it was up to the authorities to demonstrate that the paintings they confiscated in 2012 did not belong to him.

Germany has faced heavy criticism for its handling of the discovery of 1,407 works in the flat of Cornelius Gurlitt, an elderly recluse whose father took orders from Hitler to buy and sell so-called ‘degenerate art’ to fund Nazi activities.

Gurlitt, who moved freely for decades between Germany, Austria and Switzerland to sell pieces from his collection, aroused suspicion in 2010 when German officials found him on a train crossing the Swiss border with a very large sum of cash.

When authorities raided his apartment in 2012, they found a collection of Modernist and Renaissance masterpieces valued by media reports at an estimated 1 billion euros ($1.37 billion).

Hartung said he expected most of the artworks to be returned to Gurlitt, though none had been so far.

“They just started this rant and they didn’t provide any reason for it (being confiscated) so far,” said Hartung.

German authorities say 590 of the seized works are suspected to have been looted from Jewish families and other victims of the Holocaust.

Greg Schneider, executive vice president of the Jewish Claims Conference, said the aim was to get the works of art back to their “rightful” owners, adding that he was hopeful that they would be.

“Mr. Gurlitt’s announced stance, even at this late stage, will hopefully help to bring a swift resolution to this injustice,” he said.