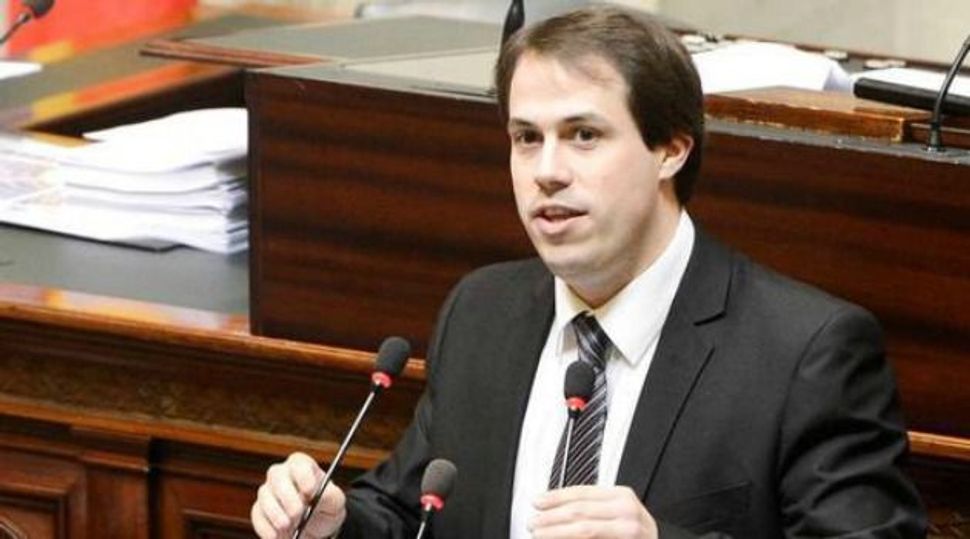 The president of Belgium’s parliament condemned the actions of a lawmaker who said that Zionists were responsible for the Holocaust and performed a quasi-Nazi salute in parliament.

“I would like to reinforce my condemnation of these hateful acts,” Andre Flahaut said on Jan. 23 in reference to the actions of Laurent Louis, who on Jan. 16 said in parliament: “The Holocaust was set up and financed by the pioneers of Zionism.”

The Belgian League Against Anti-Semitism, a newly-established watchdog, pledged during its inaugural event to focus much of its activities on Louis — an independent member of the lower house of Belgium’s Federal Parliament.

“We do not wish to offer Laurent a podium,” Isaac Franco, the league’s vice president, said during the Jan. 27 event in Brussels. “But upon consulting the tens of thousands of visitors to his website, we see he represents a threat that needs to be confronted.”

The league’s president, Joel Rubinfeld, told JTA that Louis has a rich history of making anti-Semitic and revisionist statements on the Holocaust.

Recently, he said that Israel was guilty of Nazi crimes against Palestinians. Last year, he posed for pictures outside parliament while standing on an Israeli flag.

The CCOJB, the umbrella group representing French-speaking Belgian Jews, said last week it would file a complaint against Louis, who entered parliament as a representative of the small center-right People’s Party, but he was kicked out of the party and now remains in the body as a non-partisan.

During his address about the Holocaust, Louis also performed the quenelle — a salute which was invented by the anti-Semitic comedian Dieudonne M’bala M’bala and which involves folding one’s arm over one’s chest while pointing downwards with the other arm.

Dieudonne, who has seven convictions for anti-Semitism, is currently under investigation by tax authorities on suspicion that he is concealing funds in order not to pay roughly $90,000 in fines imposed on him for the statements.

Police recovered and confiscated nearly $900,000 at his home during a raid Tuesday, according to a report Wednesday by the RTL news network.