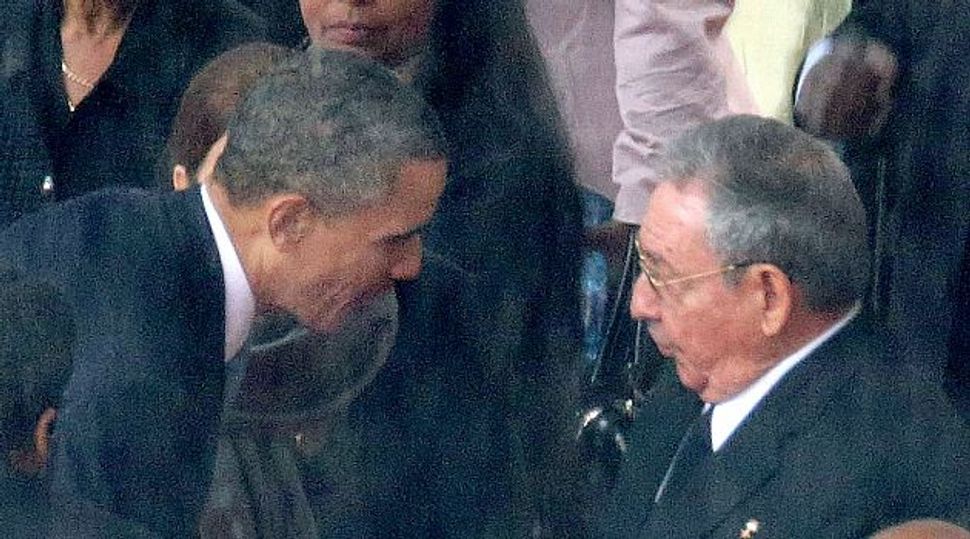 Now What? President Obama shook hands with Cuban leader Raul Castro at the memorial for Nelson Mandela in December. But there has been little sign of a policy shift that could lead to freedom for jailed American Alan Gross. Image by getty images

U.S. relations with Cuba are at their best in almost two decades, but President Barack Obama seems unwilling or unable to confront a well-organized anti-Cuba lobby and push for further progress.

Obama suggested change was coming at a Miami fundraiser in November, saying “we have to be creative, and we have to be thoughtful, and we have to continue to update our policies” on Cuba, and yet he has withheld using his executive power since last easing Cuban travel restrictions in January 2011.

Many Cuba experts and policy analysts say a fundamental revision of Cuba policy is overdue and that greater U.S. involvement could promote the market-oriented reforms under way on the communist-ruled island since Cuban President Raul Castro took over for his ailing brother Fidel in 2008.

The Obama administration says Cuba must first improve human rights and release imprisoned U.S. contractor Alan Gross, who was sentenced to 15 years for attempting to establish an illegal communications network on the island.

“Cuba would make it a whole lot easier if they would just release Alan Gross,” said one U.S. official who is knowledgeable about Cuba policy and asked to remain anonymous because of the sensitivity of the issue.

“Whenever you move on Cuba policy there is always fierce opposition from some members of Congress. There’s never a good time to do it. And it’s not clear that the benefits outweigh the negatives,” the official said.

Officials from both countries have told Reuters that U.S.-Cuban relations have taken on a more serious and pragmatic tone in recent months. They have cooperated on drug interdiction, oil-spill mitigation and immigration. Cuba experts say bilateral relations have not been this good since the 1990s, in U.S. President Bill Clinton’s first term.

The most vexing problem is the detention of Gross.

Cuba has shown no interest in releasing him without first seeing a U.S. gesture, such as releasing the “Cuban Five” agents arrested in Florida in 1998 and convicted in 2001 for spying.

That puts the burden on Obama to create a solution. U.S. officials have refused to swap the four Cubans – soon to be three – remaining in prison for Gross. One option would be for the U.S. State Department to remove Cuba from its list of state sponsors of terrorism, which carries economic sanctions on top of those from the U.S. economic embargo in place since 1962.

Any concession would provoke howls of protest from the influential anti-Castro lobby, which demands changes within the one-party state before it would ease its hard line. Havana clearly wants improved relations but is unwilling to make concessions just to please Washington.

When Obama shook Raul Castro’s hand in South Africa at a memorial service for Nelson Mandela in December, it followed a series of improvements in ties between two countries separated by just 90 miles (145 km) of sea but half a century of hostility.

In his State of the Union speech last month, Obama promised to act alone when Congress refuses. But so far he has given little indication that Cuba policy is a priority.

Obama cannot lift the economic embargo without Congress, where there is serious opposition from both parties, but he could further liberalize travel restrictions and promote more cultural exchanges, as he first did in 2009.

Cuba analysts who advocate a greater opening argue that Obama should not wait for Cuba to act, that he can loosen remittance policy and support Cuba’s growing private sector by allowing U.S. businesses and investors to deal more directly with Cubans. Although U.S. law blocks most commerce, Obama could pursue a national-interest or presidential waiver, experts say.

“The question should be, ‘Does it advance U.S. interests?’ and the answer is yes,” said Richard Feinberg, a former National Security Council aide to Clinton who visits Cuba regularly and has briefed the Obama White House.

The European Union is on the verge of reengaging Cuba in economic cooperation talks, and Latin American countries continue to deepen ties with Cuba.

“The present foreign policy of Cuba is becoming more and more realistic in searching for economic partners in order to go ahead with the updating of the economic system,” said Carlos Alzugaray, a retired former senior Cuban diplomat, noting the inauguration last month of a Brazilian-financed upgrade of the port at Mariel, near Havana, designed to boost trade.

In part because of the U.S. embargo, Cuba’s current trade policy is focused on its socialist allies, notably oil-rich Venezuela, which provides Havana with cheap oil.

“Raul (Castro) is concerned that the Venezuelan ATM machine is not going to be there forever,” said Paul Hare, a former British ambassador to Cuba.

Across the Florida Straits, the influence of the anti-Castro forces in Miami is legendary, but it is also waning with generational change. Exit polls showed Obama won close to half the Cuban-American vote in Florida in 2012 and took the state’s much larger non-Cuban Latino vote handily.

Despite the changing politics, Obama appears unwilling to confront intense Republican opposition or alienate New Jersey Senator Bob Menendez, a Democrat and Cuban-American who is chairman of the Senate Foreign Relations Committee and a fervid supporter of the embargo.

For the last decade the Cuban exile lobby has poured money into targeted congressional races and created a solid block of bipartisan support, including almost 90 Democrats.

“We have made sure to have our presence felt in campaigns around the country getting like-minded people elected,” said Mauricio Claver-Carone, director of the U.S.-Cuba Democracy PAC, which lobbies for a strict embargo.

Claver-Carone said his political action committee has put $5 million into congressional campaigns since 2003.

“We are now the single largest foreign policy PAC in the country,” he said, “and by far the largest Hispanic PAC ever in history.”