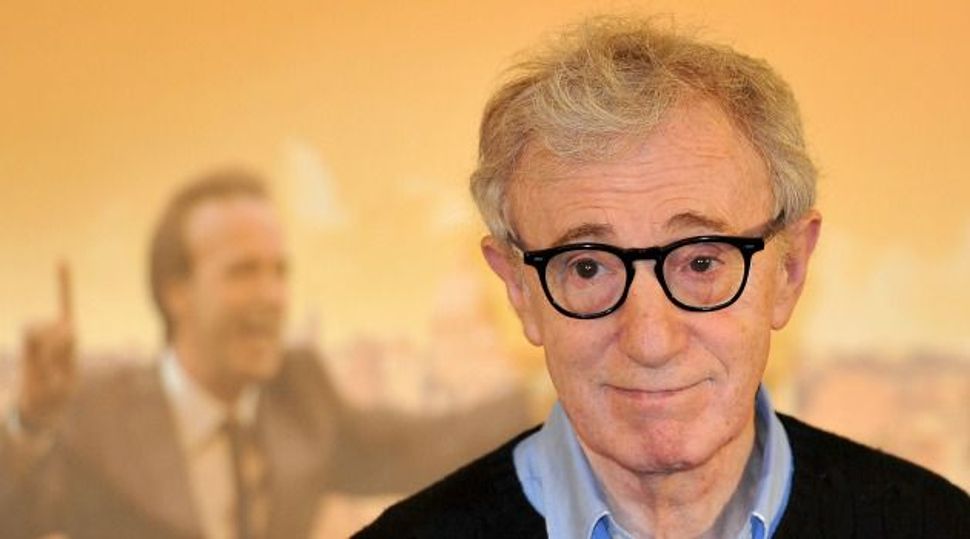 Hitting Back: Woody Allen blamed MIa Farrow for engineering child abuse accusations against him ? and accused her of lying about a decades-old affair with Frank Sinatra. Image by getty images

Woody Allen defended himself on Friday from newly published accusations by his now-adult adopted daughter that he molested her as a child, calling the allegations “ludicrous” and the product of a bitter custody battle with his former partner, actress Mia Farrow.

An advance copy of an Allen op-ed piece to be published in the Sunday edition of the New York Times was posted online five days after Dylan Farrow, 28, revived and elaborated on the decades-old accusation in an open letter on the Times website.

Allen was never arrested or prosecuted after the allegations of sexual abuse against him surfaced in 1993 and were investigated by state police in Connecticut, where Mia Farrow and her children lived.

He said the accusations originally struck him as “so ludicrous I didn’t give it a second thought”.

And he quoted findings from a review of the case by the Child Sexual Abuse Clinic of the Yale-New Haven Hospital, which he said concluded: “It is our expert opinion that Dylan was not sexually abused by Mr. Allen.”

He said he agreed with the clinic’s findings that Dylan’s account was likely to be the product of “an emotionally vulnerable child who was caught up in a disturbed family” and was “coached or influenced by her mother”.

“Of course, I did not molest Dylan,” Allen wrote. “I loved her and hope one day she will grasp how she has been cheated out of having a loving father and exploited by a mother more interested in her own festering anger than her daughter’s well-being.”

Dylan Farrow stood by her allegations in a statement published on the ABC News website on Friday.

“Woody Allen has an arsenal of lawyers and publicists but the one thing he does not have on his side is the truth,” she said. “I won’t let the truth be buried and I won’t be silenced.”

Reuters was not able immediately to reach representatives for Mia and Dylan Farrow for comment.

Mia Farrow, now 68, who appeared in more than a dozen of Allen’s films, ended a 12-year relationship with the director in 1992 amid revelations that he had an affair with her then-22-year-old adopted daughter, Soon-Yi Previn, whom Allen later married.

Allen has long asserted that Farrow fabricated the molestation claims against him and planted them in Dylan’s mind as a ploy to damage him in the custody battle that ensued.

The sex abuse claim against the prolific four-time Oscar winner, famed for such films as “Annie Hall” and “Manhattan”, was first revisited by Dylan Farrow and her mother in an interview with Vanity Fair magazine last year.

Mia Farrow’s son, Ronan, the brother of Dylan and the estranged son of Woody Allen, revived the molestation claim on Twitter in response to a telecast of January’s Golden Globe Awards, where Allen was given a lifetime achievement honor.

Dylan Farrow then expanded on the accusations in the New York Times last Saturday, asserting that Allen assaulted her in a closet-sized attic of the family home 21 years ago.

She also detailed a pattern of what she said were other instances of sexually inappropriate behavior by Allen toward her over the years.

Allen has been nominated for best original screenplay at the Oscars on March 2 for his latest film, “Blue Jasmine,” which also garnered acting nominations for Cate Blanchett and Sally Hawkins.

Allen did not suggest his daughter was lying, but rather that she had “come to believe she’s been molested” after “many years of indoctrination” by her mother.

He also cited Dylan Farrow’s older brother, Moses Farrow, as a character witness in his defense, quoting him from a recent People magazine article asserting that Allen never molested his sister and that their mother “succeeded in creating the atmosphere of fear and hate towards him”.

Moses Farrow, who was 14 at the time, is now a 36-year-old family therapist.

Allen also questioned Mia Farrow’s honesty in relation to his presumed biological son, Ronan, whose paternity was called into question by his mother in the Vanity Fair expose last year. In it, she stated publicly for the first time that she believed Ronan might actually have been fathered by singer Frank Sinatra, with whom she had an affair while she was with Allen.

“Granted, he looks a lot like Frank with the blue eyes and facial features, but if so, what does this say?” Allen wrote.

“Even if he is not Frank’s, the possibility she raises that he could be, indicates she was secretly intimate with him during our years,” Allen wrote. “Not to mention all the money I paid for child support. Was I supporting Frank’s son? Again, I want to call attention to the integrity and honesty of a person who conducts her life like that.”

The filmmaker had previously issued denials of the latest molestation claims against him through statements by his attorney in multiple television appearances this week.

Allen wrote in his personal rejoinder on Friday: “This piece will be my final word on this entire matter, and no one will be responding on my behalf to any further comments on it by any party.”