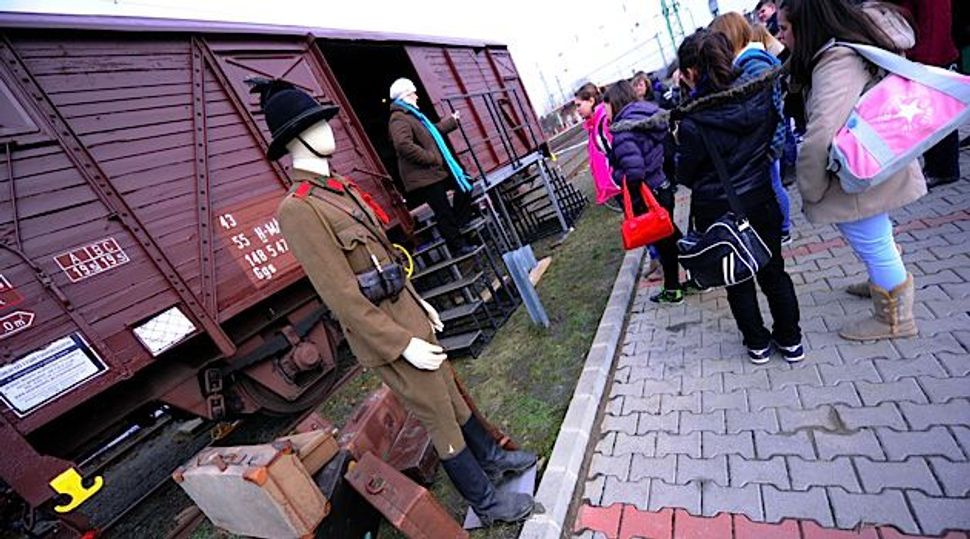 Students visit an outdoor exhibit on the Holocaust in Hungary. Image by getty images

Hungary’s main Jewish group voted on Sunday to boycott official Holocaust commemorations this year unless they more clearly show the role of local citizens in the Nazi deportation and killing of Hungarian Jews.

The Hungarian Jewish Congregations’ Association (Mazsihisz) decided to stay away from events marking the 70th anniversary of June 1944, when 437,000 Jews were sent to Nazi death camps within weeks, and set conditions for a change of position.

In total, about half a million Jews perished before the Budapest ghetto was liberated in 1945.

Mazsihisz chairman Andras Heisler said the group objected to plans for a Holocaust monument and memorial centre in Budapest as well as the appointment of a new history institute director who seemed to excuse the Holocaust deportations.

“If we do not get a real answer from the government on these issues, our decision (on the boycott) will become final,” he told journalists, adding he expected a reply within a few days.

A lack of consultations about the projects have upset Jewish communities, he said, adding: “The unity that Hungarian Jews showed in that respect is unprecedented since the war.”

Almost seven decades since the end of World War Two, anti-Semitism remains a sore point in Hungary, whose 100,000-strong Jewish community is one of the largest in Europe. Jewish leaders feel the country has not fully faced up to its wartime past.

Prime Minister Viktor Orban’s centre-right government, which has publicly pledged zero tolerance for anti-Semitism, is set to win reelection in April and a boycott will not change that.

But it could further dent the government’s image abroad, which critics say has overlooked anti-Semitism fanned by the far-right Jobbik party, weakened democratic checks and balances, and pursued unfriendly policies to many foreign-owned companies.

Among Mazsihisz’s conditions for joining the official commemorations is that the government scraps a plan to build a monument near the U.S. embassy in central Budapest that would depict Hungary as a victim of German aggression.

“Its symbolism would significantly contribute to averting the national responsibility,” Mazsihisz said in a statement.

Hungary’s wartime fascist government was an ally of Hitler and fought alongside his troops against the Soviet Union. Nazi Germany occupied the country in 1944 after discovering that Budapest, after heavy losses on the eastern front, was secretly trying to negotiate a surrender to the Allies.

Mazsihisz has criticised an official memorial centre under construction at a Budapest train station that was once a hub for the deportations to the death camps. It says the centre plays down Hungarian collaboration in the Holocaust.

It also wants the government to remove the director of a new history institute because he called a 1941 deportation of tens of thousands of Jews “a policy procedure for foreign nationals.”

The government has said it wants to commemorate all victims of events after the Nazi occupation on March 19, 1944.

“The victims of events after March 19, 1944 deserve empathy and an honourable commemoration,” a spokesman said last month.

Hungarian Jews say Budapest had stripped Jews of nearly all their rights even before the Nazi occupation. “It wasn’t the Germans who locked me up in the ghetto, but Hungarian soldiers and fascists,” Gusztav Zoltai, a Mazsihisz leader, said.