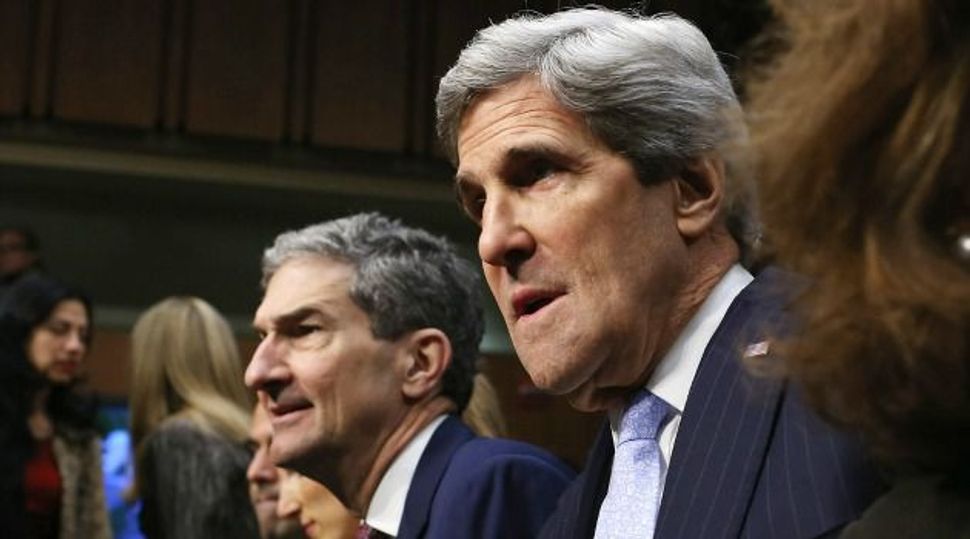 Brothers Kerry: John Kerry and his brother, Cameron Kerry, whose grandfather was Jewish, await the start of a congressional hearing. Image by getty images

In an op-ed for an Israeli newspaper, John Kerry’s brother recalled relatives who died in the Holocaust and labeled “vile” recent personal attacks on the U.S. secretary of state.

In the Friday Yedioth Achronoth, Cameron Kerry described touring the Czech Republic last week with fellow members of his Boston congregation, Temple Israel, and saying Kaddish for siblings of the brothers’ grandmother who were murdered by the Nazis.

“These experiences and their deeply personal meaning for my family make it all the more disturbing that some have recently suggested that my brother, John Kerry, had expressed ‘anti-Semitic undertones’ in his pursuit of a framework for negotiations, and some even suggested that he ‘has declared war on God’,” Cameron Kerry wrote.

“Such charges would be ridiculous if they were not so vile,” he wrote.

The attacks Cameron Kerry refers to came in recent weeks, as reports leaked that John Kerry was set to present Israel and the Palestinians with a framework for a final status peace agreement.

Moti Yogev, a Knesset member in the governing coalition, said John Kerry’s mission had an “undertone of anti-Semitism;” separately, a group of rabbis who back the settler movement said Kerry could face divine retribution for his mission.

Cameron Kerry praised Netanyahu and other top Israeli officials for defending his brother.

“We can all debate the effectiveness of security measures, the delineation of borders, arrangements for East Jerusalem, and other real issues among the parties, but there is no truth and no good that can come by calling into question John Kerry’s good faith toward his own heritage,” he wrote. “Israel and the Jewish people deserve better than that.”

The Kerry brothers first learned that their paternal grandparents were Jewish in 2004, during John Kerry’s run for the presidency, when The Boston Globe uncovered his grandfather’s roots.

Cameron Kerry had, coincidentally, converted to Judaism and was active in the Jewish community. Until last year, he was general counsel to the U.S. Department of Commerce. He is now a visiting fellow at the Brookings Institution think tank and a visiting scholar at the Media Lab of the Massachusetts Institute of Technology.