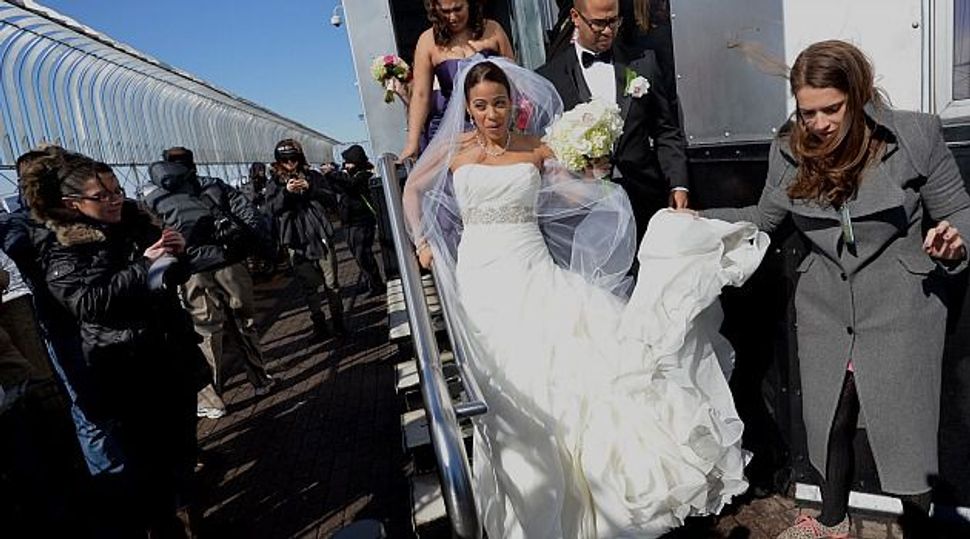 Love was in the air atop the Empire State Building as three couples exchanged vows on Valentine’s Day, the only day weddings are permitted at the iconic New York City skyscraper.

In back-to-back ceremonies on Friday, the couples were married at a wall of 4,000 red, pink and white roses on the 86th-floor Observation Deck, with the Manhattan skyline as the backdrop.

The couples were chosen out of hundreds of others who entered a contest explaining why they wanted to be married at the 102-story landmark.

The ceremonies were small, with only family and a small group of friends in attendance.

Winner Brendan Goldblatt said that marrying Maria Vasquez, his girlfriend of eight years, would give the popular tourist site deep personal significance for the couple and give them bragging rights for years to come.

“Everybody gets one or two stories they get to tell their grandkids,” he said. “This is going to be one of those stories, that we were married on top of the world’s most iconic building.”

The couple’s 2-year-old daughter, Victoria, wore a white dress with a big fluffy bow for the occasion.

The other winning couples were New Yorkers Veronica Vizcaino and Gustavo Espinal, and Shelby and Bill Costa of Virginia Beach, Virginia.

It was a familiar ritual for the Costas, who were married 10 years ago, also at the Empire State Building, also after winning a competition.

Renewing their vows on Valentine’s Day at the site of their original wedding portends another happy decade, said Bill Costa.

“The first 10 years worked out well being married here,” he said. “So I figured the next 10 will go equally as well.”

Lights atop the Empire State Building will sparkle red and pink on Friday night to mark Valentine’s Day. It is the city’s second-tallest building after One World Trade Center, which is still under construction.