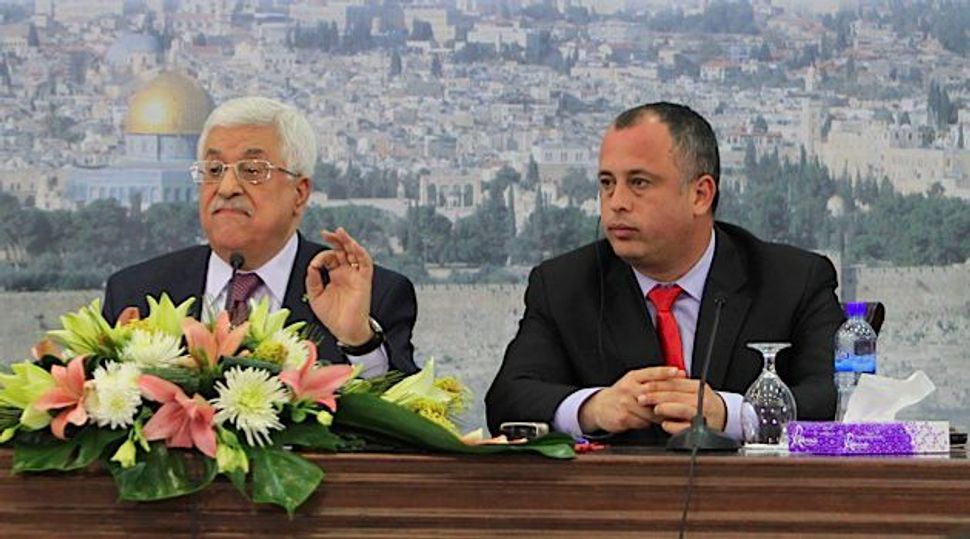 Palestinian Authority President Mahmoud Abbas told Israeli students visiting him in Ramallah that he does not seek to redivide Jerusalem.

Abbas said Sunday that the capital of a Palestinian state could be located in eastern Jerusalem, and west Jerusalem would be controlled by Israel, and a higher council could control movement between the two sides, Israeli media reported.

He also said that he would not be willing to share sovereignty over the Temple Mount, but would allow Jews to worship at the Kotel.

Abbas told the some 300 students, at the meeting organized by the Lobby for the Promotion of a Solution for the Israeli-Arab Conflict and the One Voice organization, that he did not intend to flood Israel with Palestinian refugees and change its demographic character by demanding a right of return, according to reports.

He said Israeli Prime Minister Benjamin Netanyahu could “turn to the United Nations” if he wanted recognition of Israel as a Jewish state and said that the new demand “places an obstacle in the way of peace,” according to Haaretz.

Abbas said that a deal signed with him will be honored by Hamas.

Addressing a sticking point in U.S.-brokered peace talks, Abbas dismissed charges by Netanyahu that he wanted to “flood” Israel with Palestinian refugees.

He said the Palestinians wanted to keep alive the refugee issue in the talks resumed after a three-year freeze in July under U.S. Secretary of State John Kerry’s tutelage, to ensure a resolution of the rights of Palestinians who fled or were driven away during 1948 hostilities when Israel was founded.

“But we do not seek either to flood Israel with millions (of refugees) or to change its social composition,” Abbas said.

His comments were seen as his clearest suggestion yet he might accept Israel’s demands that refugees be permitted to “return” only to a future Palestinian state.

Netanyahu had accused Abbas in January of being unwilling accept that Israel should not be “deluged” by refugees as part of a deal under negotiation to achieve Palestinian statehood in land occupied by Israel since the 1967 Middle East war.

Reiterating his insistence that Palestinians recognise Israel as a Jewish state – a demand Abbas has rejected – Netanyahu had said: “Otherwise what we are being asked to do is allow the establishment of a Palestinian state …which will try to flood us with refugees”, undermining Israel’s own existence.

Despite the signs of possible progress on the refugee issue, though, the sides still seemed far apart on other disputes such as the Palestinian demand for a capital in East Jerusalem, which Israel has made a part of its capital and annexed in a move never recognised internationally.

With both Netanyahu and Abbas facing pressure from respective political allies against making concessions on core issues, Kerry has said he hopes to publish a framework or possible blueprint for an eventual peace agreement.