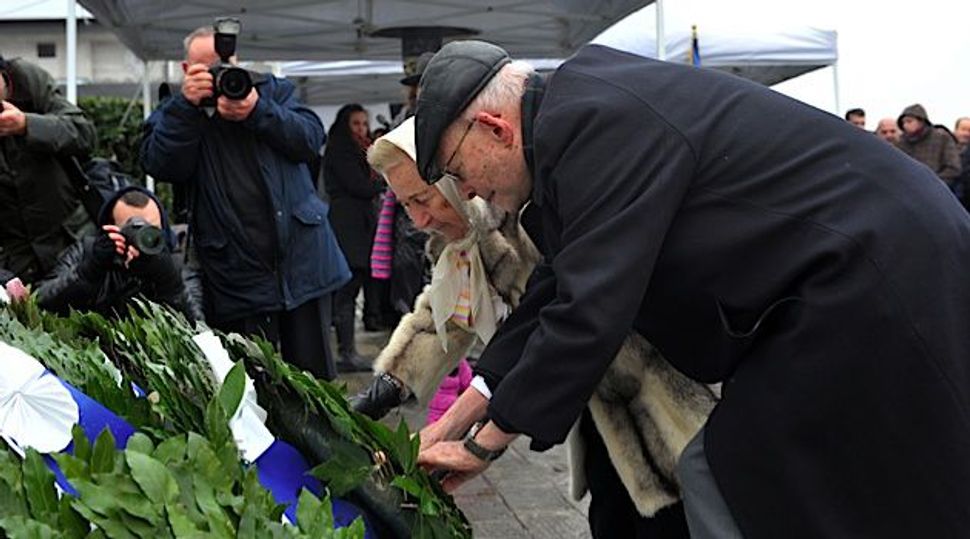 Members of the Jewish community take part in a ceremony at the Holocaust Memorial commemorating the persecution of the Jewish people during World War II, in Thessaloniki, Greece. Image by getty images

The Jewish community of Thessaloniki is suing Germany for the return of a ransom paid during the Nazi occupation of Greece.

The papers were filed Friday in the European Court of Human Rights in Strasbourg, France, the community’s president, David Saltiel, told JTA.

The move to the European court comes after a struggle of two decades in Greek courts, including the Supreme Court, which ruled that Germany had immunity under international conventions.

“It is the end of a long process,” Saltiel said. “We have finished with the courts in Greece and now we hope that the Human Rights Court can help restore the ransom money that the Jewish community paid to Germany.”

The ransom was paid to free some 9,000 of Thessaloniki’s Jewish men, aged 18 to 45, from forced labor by the Germans, who took control of the city in 1942. The German civilian administrator of the Thessaloniki, Max Merten, demanded some 2.5 billion drachmas to release them.

“They were sick and dying and starving and working without food, so the community collected the money to pay,” said Saltiel.

In total, 1.9 billion drachmas, or nearly $69 million, was paid before the Germans began transporting Thessaloniki Jews to the death camps. More than 49,000 Jews out of the city’s prewar Jewish population of 55,000 were deported. Fewer than 2,000 survived.