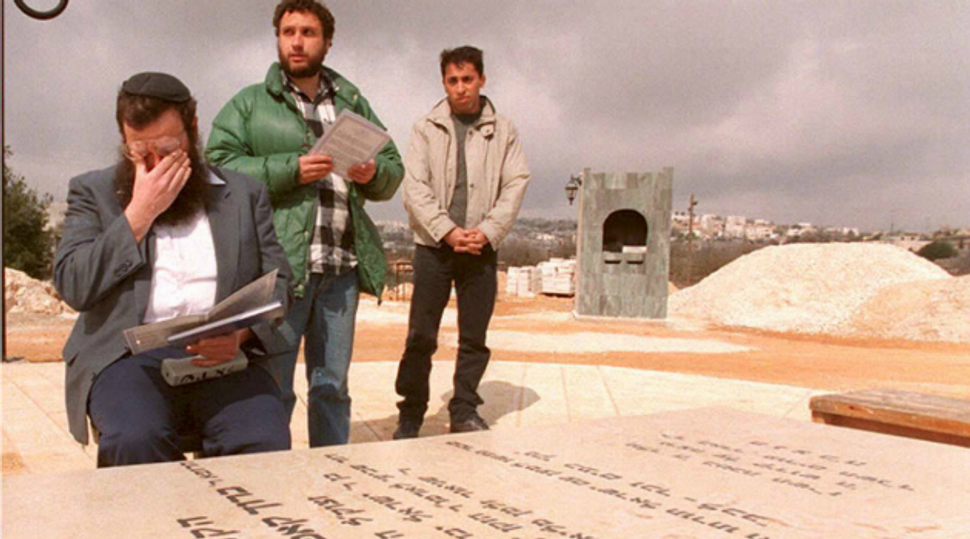 Kach leader Baruch Marzel wipes his eyes at the grave of Baruch Goldstein, who killed 29 Palestinians in Hebron. Image by Getty Images

France’s Jewish Defense League has published a eulogy of Baruch Goldstein which celebrates a massacre he perpetrated against Palestinian worshipers in Hebron 20 years ago.

The group, known locally as Ligue de Defense Juive or LDJ, posted the eulogy on its website ahead of the Feb. 25 anniversary of the massacre during which Goldstein, a U.S.-born physician, shot dead 29 Palestinians while they were praying at the Cave of the Patriarchs.

“Baruch Goldstein is an Israeli physician who in 1994 killed 25 Arab settlers and wounded another 125. He was killed in the confrontation and became a hero for many Israeli patriots,” the eulogy dated Feb. 22 said.

The text also listed commemorations of Goldstein as a “tribute to the memory of Dr. Baruch Goldstein, the saint, may God avenge his blood.”

LDJ officials say the group has several hundred members in France. The group adheres to the doctrines of the late Rabbi Meir Kahane, a radical Jewish-Israeli nationalist who was born in the United States. He was murdered in 1990 in New York by a Palestinian gunman.

Kahane’s Jewish Defense League, or JDL, is considered a terrorist group in the United States. Israel also outlawed the Kach movement which Kahane founded after he moved to Israel in 1971.

In France, LDJ is not an illegal organization, although its members have on various occasions been involved in violent confrontations, most commonly in vigilante actions against people they accuse of anti-Semitism or anti-Semitic violence.

The Jewish-French Union for Peace, a small group which supports the boycott of Israel, called on other French Jewish groups to condemn the LDJ for glorifying Goldstein’s actions.

“French authorities criminalize BDS,” the union wrote in a Feb. 27 statement, referencing the French judiciary’s restrictive policy on activists of the Boycott, Divestment and Sanctions movement against Israel. “Yet they let this band of hoodlums do as they please and enjoy impunity despite their criminal actions. Why? We are awaiting an answer.”