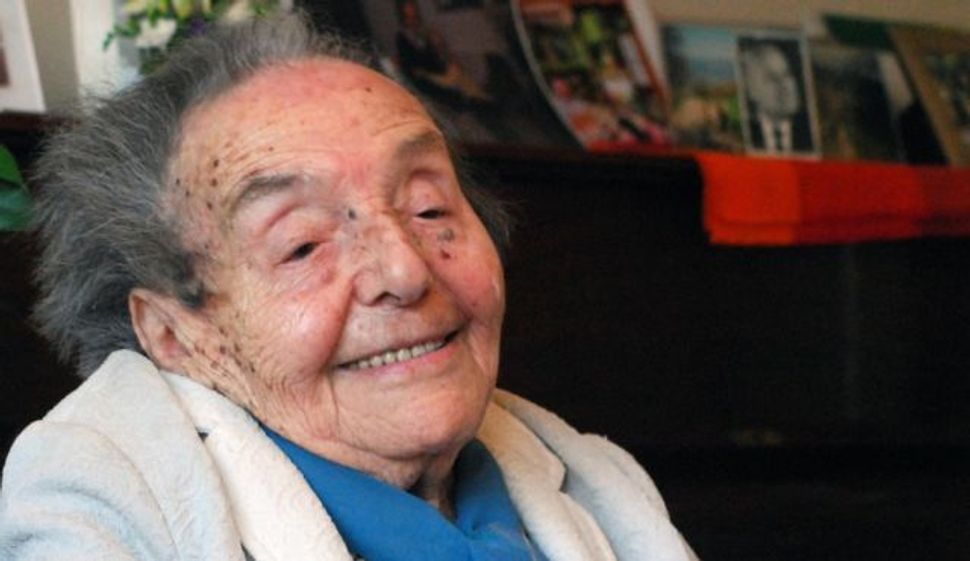 Alice Herz-Sommer, pictured here on her 107th birthday, is the subject of an Oscar-winning documentary. Image by polly hancock

A documentary about Alice Herz-Sommer, the 110-year-old Holocaust survivor who died last weekend, has won the Academy Award for best short documentary.

“The Lady in Number 6: Music Saved My Life” is a 38-minute film about Herz-Sommer’s use of music to survive the death camps.

In accepting the Oscar, the film’s director, Malcolm Clarke, said that he was struck by Herz-Sommer’s “extraordinary capacity for joy” and “amazing capacity for forgiveness.”

Herz-Sommer was considered the oldest Holocaust survivor until her death on Feb. 23.

Alice — everyone from presidents on down calls her Alice — was born on Nov. 26, 1903 into an upper-class Jewish family steeped in literature and classical music.

A friend and frequent visitor was “Uncle Franz,” surname Kafka, along with composer Gustav Mahler and other luminaries.

Trained as a pianist from childhood, Alice made her concert debut as a teenager, married, had a son and seemed destined for the pleasant, cultured life of a prosperous Middle European. But everything changed in 1939 when Hitler, casually tearing up the Munich accord of a year earlier, marched his troops into Prague and brought with him his anti-Semitic edicts.

Her public concert career was over, yet the family managed to hang on in an increasingly restrictive existence in the Czech capital.

In 1943, however, Alice and her husband, their 6-year old son Raphael (Rafi), and Alice’s mother were loaded on the transport to Theresienstadt.

But her main focus was on Rafi, trying to make his life bearable, to escape the constant hunger and infuse him with her own hopefulness.

“What she did reminded me of Roberto Benigni in the Italian film ‘Life is Beautiful,’ “ said Malcolm Clarke, director of “The Lady in Number 6.” “He plays an Italian Jew who pretends to his young son that life in the camp is some kind of elaborate game for the boy’s special amusement.”

Liberated in 1945, Alice and Rafi returned to Prague but four years later left for Israel. There she taught at the Jerusalem Academy of Music and performed in concerts frequently attended by Golda Meir, while Rafi became a concert cellist.

Alice said she loved her 37 years living in Israel, but when Rafi, her only child, decided to move to London, she went with him. A few years later Rafi died at 65, but the mother remained in her small flat, No. 6, in a North London apartment house.

Nearly all of the film was shot over a two-year period inside the flat dominated by an old Steinway piano on which Alice played four hours each day, to the enjoyment of her neighbors.

Originally the filmmakers considered “Dancing Under the Gallows” as the film’s title before going with “The Lady in Number 6.”

It was a wise decision, for the film is anything but a grim Holocaust documentary with Alice’s unfailing affirmation of life, usually accompanied by gusts of laughter.

Her health and speech have declined in recent months, and she no longer does interviews. But in a brief phone conversation, conducted mainly in German, Alice attributed her outlook partially to having been born with optimistic genes and a positive attitude.

“I know there is bad in the world, but I look for the good,” she said, and “music is my life, music is God.” At 104, she took up the study of philosophy and likes to quote German philosopher Friedrich Nietzsche, who said “Without music, life would be a mistake.”

The film is peppered with such observations, which coming from anyone else might be considered a sign of Candide-like naivete.

A sampling of her sayings: “Wherever you look, there is beauty everywhere”; “After a century on the keyboard, I still look for perfection”; “I’m so old because I use my brain constantly. The brain is the body’s best medicine”; and “A sense of humor keeps us balanced in all circumstances, even death.”

Many of the observations are recorded by Caroline Stoessinger in her book “A Century of Wisdom: Lessons from the Life of Alice Herz-Sommer, the World’s Oldest Living Holocaust Survivor,” which forms the basis for the film and her on-screen interviews.

Stoessinger, a New York concert pianist, interviewed Alice and her friends over a period of 15 years and became an ardent admirer of her subject.

“Alice doesn’t complain, she doesn’t look back, she has no anxieties,” Stoessinger said. “Even in Theresienstadt, she never doubted that she would survive.”

Stoessinger also convinced Clarke to direct the film. He won an Oscar in 1989 for his short documentary “You Don’t Have to Die,” and an Oscar nomination for “Prisoner of Paradise,” which also focused on life and death in Theresienstadt.

The film’s producer, Nick Reed, like Clarke, was reluctant to take on the new assignment.

“We asked ourselves, who is going to watch another Holocaust documentary with a really old lady? Fred Bohbot, our executive producer, Malcolm and I have really been stunned by the enthusiastic reaction to the film,” Reed said.

Clarke and Reed are British-born Canadians. Neither is Jewish, but as Reed put it, “I am not a Jew, but I’m Jewish.”

Asked about the film’s budget, Reed responded, “About 35 cents, a bus token and bits of old chewing gum.”