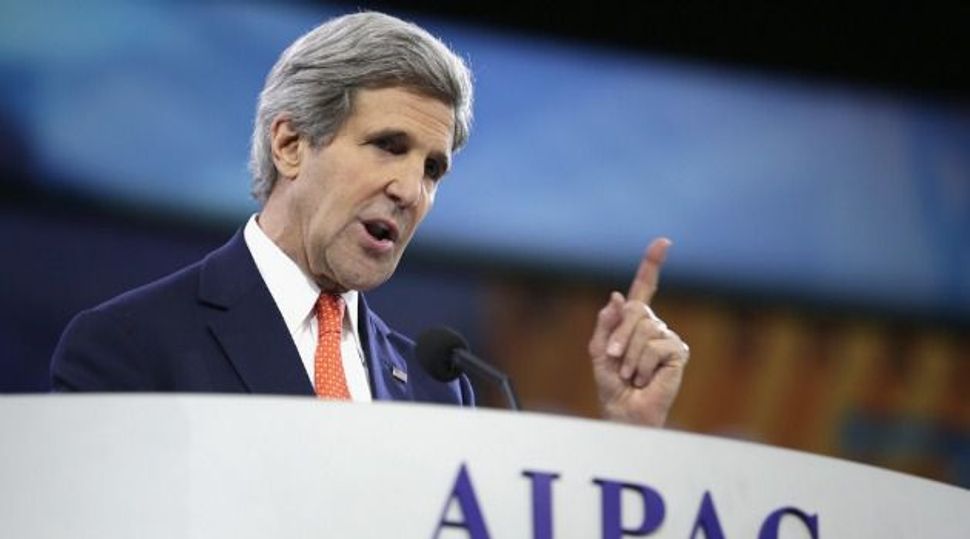 “I will continue to staunchly, loudly and unapologetically oppose boycotts of Israel,” Kerry said Monday evening at the American Israel Public Affairs Committee’s conference, drawing a standing ovation. “That will never change.”

Last month, Israeli leaders had complained about Kerry’s remark at an international conference in Munich that Israel faced increasing isolation and boycott calls in the absence of peace. He later explained that he was not advocating boycotts but warning of the likelihood of their increased popularity.

“There is a distinction between a unilateral withdrawal from Lebanon or Gaza where nothing is resolved and a phased withdrawal which is negotiated,” he said.

He described security mechanisms proposed by U.S. Gen. John Allen along the West Bank and Jordan border that would be part of any agreement.

“We will never let the West Bank turn into another Gaza,” he said to applause.

Kerry also pledged that the United States would not make a deal with Iran that allows it to develop nuclear weapons.

“No deal is better than a bad deal,” Kerry said

He defended nuclear talks now underway between Iran and the major powers. Kerry said that President Obama was committed to diplomacy because a military option presented so many dangers.

“Those who say strike and hit need to check what might happen after we do that,” he said. “Only strong diplomacy can guarantee that a nuclear weapons program goes away for good instead of going underground and becoming more dangerous.”