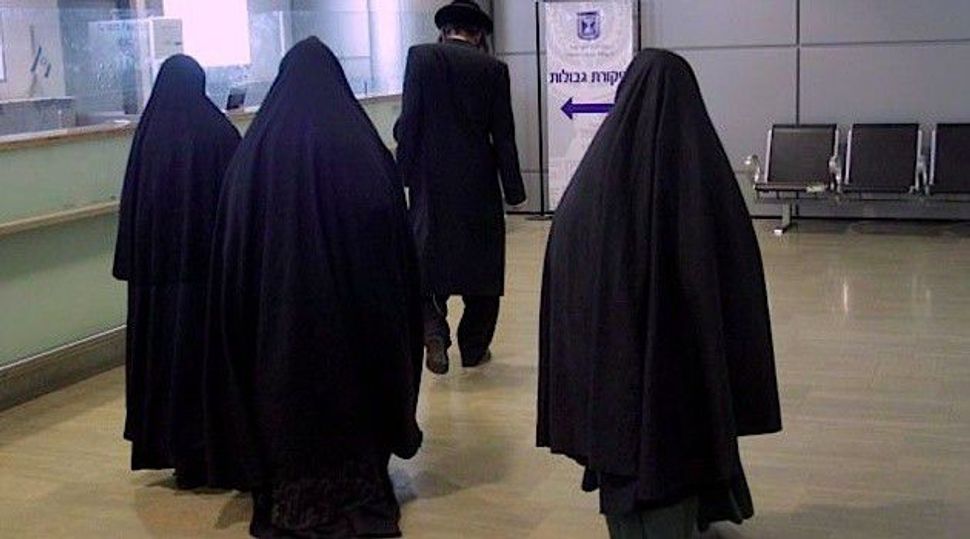 Women in the Lev Tahor sect are forced to wear a burqa like uniform that has led some to call the group the Jewish Taliban. Image by Haaretz

A Canadian court ordered the fringe haredi Orthodox Lev Tahor sect to turn over as many as 13 of its children to authorities after some of its members appeared to have fled the country.

Police officers and children’s aid workers visited Lev Tahor homes Wednesday night in Chatham-Kent, in southwest Ontario, with the landlord helping them gain access to residences where no one was home, the Toronto Star reported.

Officers told sect members who answered the door that they were there because of a “court order” and that they were looking for children. The officials refused to answer reporters’ questions.

A court official told the Star that a judge had issued an order for the children after Lev Tahor parents failed to show up in court on Wednesday. The parents were scheduled to appeal a decision to have the children returned to adjacent Quebec.

Some 200 members of Lev Tahor left Quebec for Ontario last fall just before authorities could execute an order from a Quebec court to place 14 children in foster care following allegations of physical abuse, neglect, underage marriages and forced medications in the community.

The affected families were forbidden from leaving Canada. But on Wednesday, nine sect members — three adults and six children, according to the Star — were detained in Trinidad and Tobago. The group was en route to Guatemala when immigration officials at Port of Spain’s Piarco International Airport stopped them, the Trinidad Ministry of National Security said in a statement.

The Lev Tahor members were denied entry because they gave inconsistent answers when questioned by immigration officials, the statement said.

It was not immediately confirmed whether the children detained were those named in the Ontario court order.

However, Stephen Doig, executive director of Chatham-Kent Children’s Services, told the Globe and Mail newspaper, “We now apparently have those children missing in defiance of that court order. We would certainly have some concerns about the welfare of those children.”

A Lev Tahor spokesman did not comment on whether the two families targeted by the court order had indeed left for Trinidad. Asked whether the 14 children were still in Chatham, he said, “I don’t think so.”

On Wednesday, another Lev Tahor member told the Toronto Sun that the children who left “are on a trip, on a vacation.”

The rest of the sect remains in Ontario.