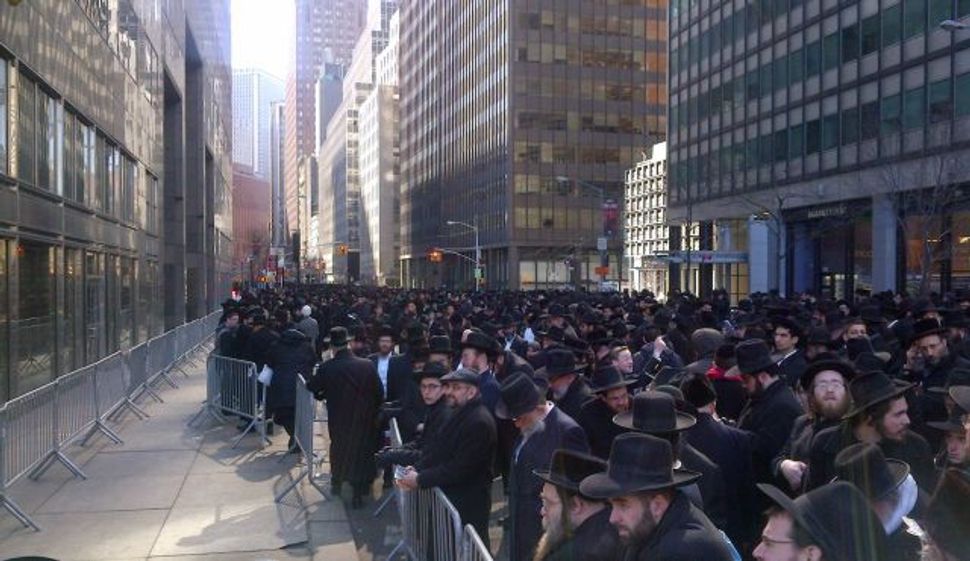 (Haaretz) — The scene was completely surreal: A crying cantor beseeching the Lord in Yiddish-accented Hebrew to hear his prayers; high-octane loudspeakers amplifying the cry throughout lower Manhattan; tens of thousands of black-coated ultra-Orthodox Jews earnestly repeating the Psalms in the freezing cold; some of New York’s finest, duly exasperated; and the looks of astonishment on the faces of unsuspecting tourists who thought they were simply walking the alleyways near Wall Street when they encountered a sight that may be commonplace in Bnei Brak but seemed utterly fantastic in the heart of New York.

Some 50,000 ultra-Orthodox believers pushed themselves onto Water Street near the East River on Sunday afternoon, heeding the call to attend the “Great Prayer Assembly” aimed at bolstering “our embattled brethren” who are fighting the new Israel Defense Forces draft law which is due to come to a Knesset vote soon. They came in buses from Brooklyn, on the subway from Queens, on ferries from Staten Island, in cars from Manhattan and in convoys from Muncie to Lakewood, New Jersey, in the south.

“One two, einz” the loudspeakers blared, their test signal in both English and Yiddish, as the devoted jockeyed and maneuvered in an effort to get closer to the central podium. The policemen and policewomen ordered them to stay within the areas earmarked by the barricades, but didn’t seem to have been prepared for the traditional Israeli-Haredi ruse: the offenders nodded to signal that they had heard the warnings, then continued on their original way as if it was all just a friendly misunderstanding.

“This is a demonstration of force,” I hear some expert analysis from journalist Jacob Kornbluh. “Agudat Israel in America wanted to prove that they were no less adept than their colleagues in Israel in mobilizing the masses,” he says. “And the Satmar Rebbe Aaron Teitelbaum” – locked in a power struggle with his brother Zalman – “wanted to show how successful he’s been in convincing his followers of Israel’s hostility to anything religious.”

“It’s an evil law because it’s an effort to uproot the religious from Israel,” a yeshiva student from Lakewood duly tells me, though he prefers to remain anonymous, “because we are not allowed to talk to people like you.” Then his friend chimes in: “Israel exists because of miracles brought about by those who study Torah.”

And they were the moderates. A Satmar youth – who agrees to reveal his first name, Moshe – tells me that “the Zionists created all of these problems with the Arabs, and now they want to drag us to fight their wars for them.”

“Who will defend Israel?” I ask, and he looks at me as if I am a fool.

“It’s better that no one does, so that Israel collapses and Jews can go back to live safely as they always have.” As I leave, his friend gives me a business card of trueotorahjews.com, with the slogan “Zionists do not represent Jews.”

Looking on is Yossi Gleiberman, an older watch salesman from Brooklyn, who refuses to catalogue his religious affiliation because “we’ve all become so labeled.” He says that many Orthodox Jews understand that Israel is challenged by the rapidly growing Haredi population and are willing to “sit down and discuss solutions.” But the answer, he adds, cannot be “criminalizing study of the Torah.”

Gleiberman proudly tells me that he came to the prayer assembly accompanied by two of his sons and a daughter, as well as his wife and her grandmother. The women, of course, are in a separate area, far from the main podium, near the South Street Seaport, where the police try to move them further north as buses full of new demonstrators keep on coming.

After a little more than an hour of prayer, tears and heartfelt grief, the crowd disperses quietly, the policemen heave a big sigh of relief and the tourists from China, Norway and Japan keep on clicking, because without photographic proof, they realize, no one back home will believe them.