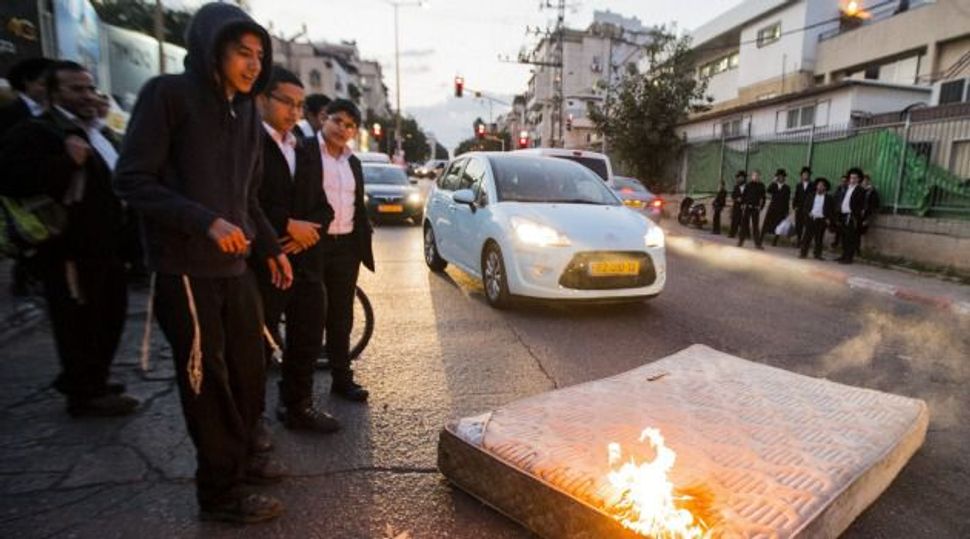 Finalised after months of political wrangling and likely to spark ultra-Orthodox rage, the legislation will be implemented fully in 2017 and limit the annual number of ultra-Orthodox men excused from compulsory military service to 1,800 granted “gifted scholar” status.

The issue is at the heart of a raging national debate over “sharing the burden” of life in a country where most Jewish men and women are called up for military service when they turn 18.

Most ultra-Orthodox Jews, or “Haredim”, a Hebrew term meaning ‘those who tremble before God’, have been exempt from conscription.

Under the new law, the government will set an annual enlistment quota for ultra-Orthodox seminary students. If that quota – the 2017 target is 5,200 – is not met, conscription notices will be served to all but the 1,800 top scholars, with criminal penalties for any draft-dodging.

Ultra-Orthodox legislators, along with opposition lawmakers protesting against a series of bills this week that they view as undemocratic, boycotted the parliamentary session. But they voiced their anger on a “Haredi” website after the 67-1 vote.

“This is a black day for the state and the government, ultra-Orthodox lawmaker Moshe Gafni, was quoted as saying on the Kikar Hashabat website. “The state of Israel has lost the right to call itself a Jewish and democratic state.”

“The Haredi public will not forget or forgive the prime minister and his partners,” Gafni was quoted as saying.

But Finance Minister Yair Lapid, whose centrist party pushed to lift the exemptions, said: “Is it too much to expect people who live here and whose lives are defended every day by soldiers … to do their bit, no more or no less than any other Israeli citizen?”

The ultra-Orthodox make up about 10 percent of Israel’s 8 million population and are a fast-growing, poor sector.

Most of their men are unemployed and live off state benefits. They are resented by many Israelis who accuse them of burdening the economy and sponging off the state while avoiding the duties that bind others.

Haredim say the study of holy scriptures is a foundation of Jewish life, that scholars have a right to devote themselves full time to the tradition, and that army service would deny them fulfilment of that religious edict.

Changing the so-called secular-religious status quo in Israel has carried significant political risk in the past for successive coalition governments, which have often relied on the support of Haredi partners for their survival.

But for the first time in a decade, Israel’s cabinet has no ultra-Orthodox members, opening the way for the reforms.

The legislation sets a “period of adjustment”, until 2017, in which seminary students can choose to either enlist into the army or civil service, or study at a religious school.

Hundreds of thousands of Haredim staged a mass rally in central Jerusalem earlier this month to protest against the change in the law and have promised further large-scale demonstrations if the new measures are enacted.