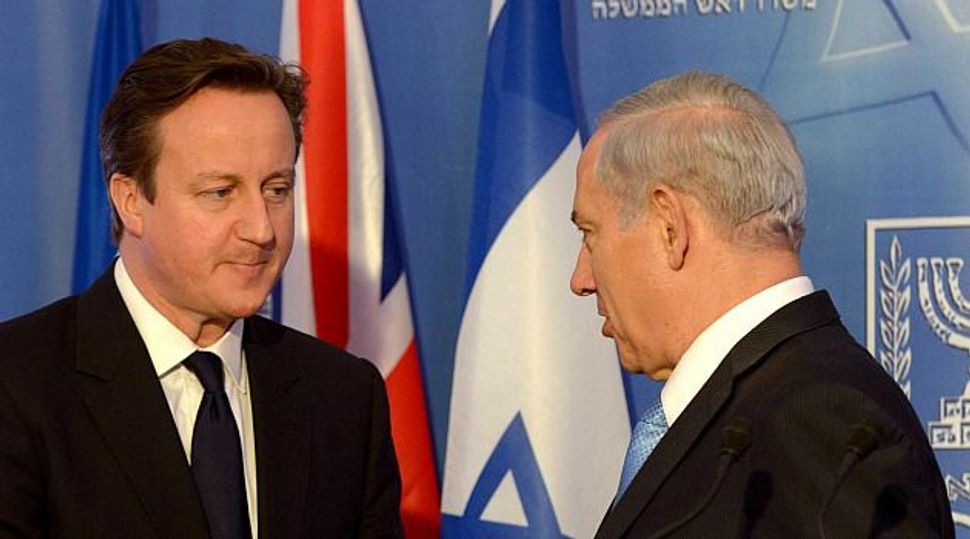 British Prime Minister David Cameron told Israeli lawmakers that his country would work against international boycotts and sanctions against Israel.

“You have a British prime minister whose belief in Israel is unbreakable and whose commitment to Israel’s security will always be rock-solid,” Cameron said in a speech Wednesday at the Knesset in Jerusalem.

Cameron arrived in Israel on Wednesday afternoon for a whirlwind two-day visit, his first visit to the Jewish state since he became the British prime minister in 2010. The visit was rescheduled from last month, when floods devastated areas of Britain. Cameron visited Israel in 2009 as leader of the opposition in Britain. He is leading a business delegation on this visit.

He also called for the achievement of a two-state solution which would provide “justice for the Jewish and Palestinian peoples.”

“We back the compromises needed —- including the halt to settlement activity and an end to Palestinian incitement too,” he said.

He is scheduled to meet with Palestinian Authority President Mahmoud Abbas in Ramallah on Thursday.

Cameron told the Knesset that his great-great-grandfather was a Jewish man from Germany, and that this relationship gives him “some sense of connection” to the Israeli people. Cameron also told the Knesset that he would continue to support Jewish ritual practices in Britain, including ritual slaughter, or shechitah, which has been under attack in countries throughout Europe.

“The Jewish community has been an absolute exemplar in integrating into British life in every way,” said Cameron, “but integration doesn’t mean that you have to give up things that you hold very dear in your religion.”

During Israeli Prime Minister Benjamin Netanyahu’s opening remarks and his speech following Cameron’s, haredi Orthodox and Arab lawmakers walked out and heckled Netanyahu in response to the passage of legislation this week to raise the threshold required for a party to enter the Knesset, and to draft haredi Orthodox yeshiva students.