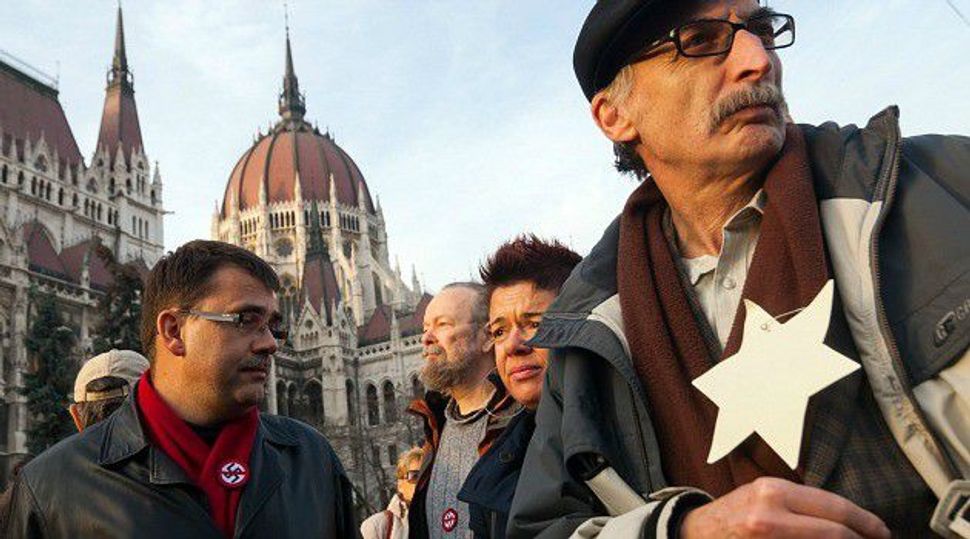 No to Hatred: Hungary has been hit by a rising tide of anti-Semitism. Image by Getty Images

An envelope containing white powder sent to a representative of Hungary’s Jewish communities did not contain any dangerous materials.

The envelope was mailed earlier this week to Andras Heisler, president of the Mazsihisz federation of Hungarian Jewish communities, according to a report Wednesday by the ATV station.

Separately, police in Tatabanya, which is approximately 30 miles west of Budapest, reported that swastikas and anti-Semitic slogans were daubed on several tombstones in the city’s Jewish cemetery. No suspects have been apprehended, the EFE news agency reported Friday.

On March 24, hundreds of European rabbis are scheduled to convene in Budapest for the biannual conference of the Rabbinical Center of Europe.

Jobbik, a far-right party with a history of anti-Semitism, is the third largest party in Hungary with 43 of the 386 seats in Parliament.

Earlier this year, the Mazsihisz organization and other Jewish groups said they would not attend government-led commemorations on the 70th anniversary of Hungary’s occupation by the Nazis because the government was obfuscating the role played by Hungarians in the murder of Hungarian Jews.

The Rabbinical Center of Europe’s conference is not connected to the commemoration plans, a spokesman for the center told JTA on Sunday.