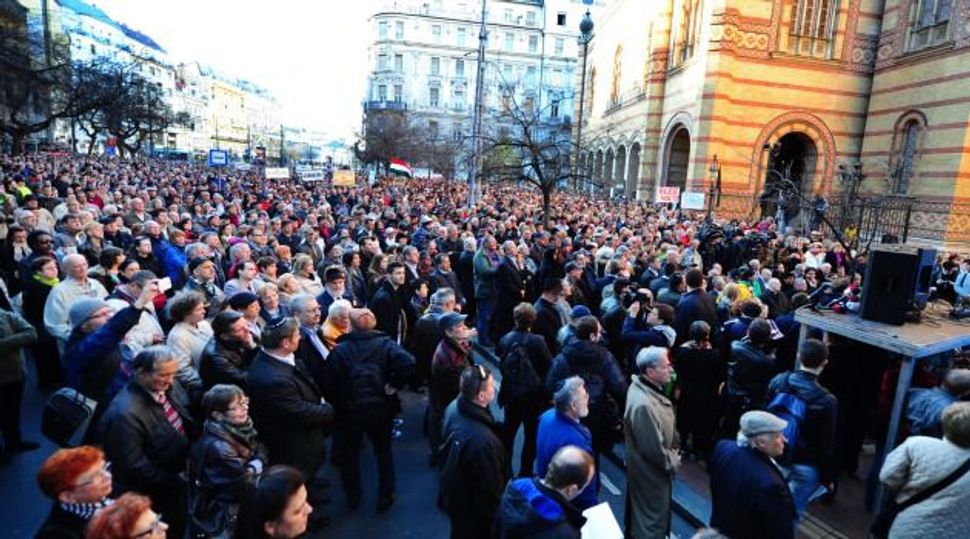 The Hungarian Jewish community held a memorial event in Budapest to mark the 70th anniversary of the occupation of Hungary by the Nazi-led German Army.

Wednesday’s commemoration was held in Budapest in front of the downtown Dohany Street Synagogue.

The event, sponsored by the Jewish community but open to the public, comes after representatives of Mazsihisz, the Association of Hungarian Jewish Communities, voted to boycott state-sponsored Holocaust memorial programs.

“This event is the beginning of Holocaust commemorations in Hungary for the 70th anniversary of the Hungarian Holocaust,” said András Heisler, president of Mazsihisz, the Federations of Hungarian Jewish Communities, in the opening speech of the event, which drew thousands.

“In the name of the 600,000 Hungarian Jews killed during the Shoah, we raise our voice against those, who are in power, in whom as a minority we cannot trust,” said Heisler, expressing the Hungarian Jewish community’s disappointment with the government, which it accuses of shifting away national responsibility for the murder of the country’s Jews during the Holocaust.

Viktor Orban, the Hungarian prime minister, was invited to the event, but did not attend; however, his deputy, Zsolt Semjén, was present. The head of the Hungarian Catholic Church, Cardinal Peter Erdő, and Gusztav Bölcskei, Bishop of the Protestant Church in Hungary, also attended the program.