Israel Won’t Release Prisoners Without Something in Return, Says Netanyahu 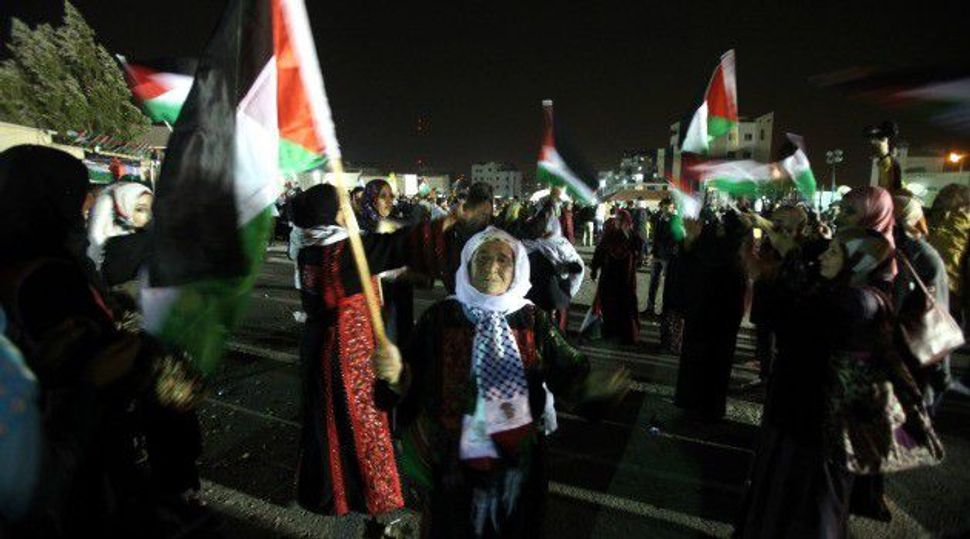 Relatives of freed Palestinian prisoners gathered to welcome them home in the West Bank. Image by Getty Images

Israel will not release more Palestinian prisoners without getting something in return, and such a deal will be brought to the Cabinet for approval, Prime Minister Benjamin Netanyahu said.

Netanyahu made the statements Sunday morning at a meeting of his Likud Party government ministers, ahead of the weekly Cabinet meeting. The remarks come a day after Israel missed a deadline for releasing a fourth group of Palestinians from Israeli prisons, some 26 prisoners. Israel had agreed in August to release a total of 104 prisoners, including 14 Israeli-Arabs, in order to jumpstart peace negotiations, which are scheduled to end at the end of next month.

“I suggest that all speculation be avoided until the full picture becomes clear, and this could happen in a matter of a few days,” Netanyahu said. “Either this is going to be settled or it’s going to fall apart. At any rate there won’t be any deal until it’s clear what the State of Israel is getting in return, and if there is a deal it will be brought to the government for approval.”

The Times of Israel and Haaretz reported that Israel had offered to release another 400 Palestinian prisoners if the Palestinians agreed to extend the talks past their nine-month deadline and to again agree to not turn to international bodies, including the United Nations, for statehood recognition.

Israeli Economy Minister Naftali Bennett, head of the Jewish Home Party, said he work to prevent the release of additional prisoners, saying in a Sunday morning Facebook post that he has received “hundreds of inquiries” about the rumored deal.

Also on Sunday, chief Palestinian peace negotiator Saeb Erekat said in a statement that Israel’s agreement to release the 104 prisoners held since before the 1993 Oslo Accords was in exchange for Palestinian agreement not to turn to international bodies to achieve statehood, and not to bring the Palestinians to the negotiation table, the Palestinian Maan news agency reported.

He said the Palestinians were still holding “sensitive talks” with the United States and Israel.

Israel Won’t Release Prisoners Without Something in Return, Says Netanyahu