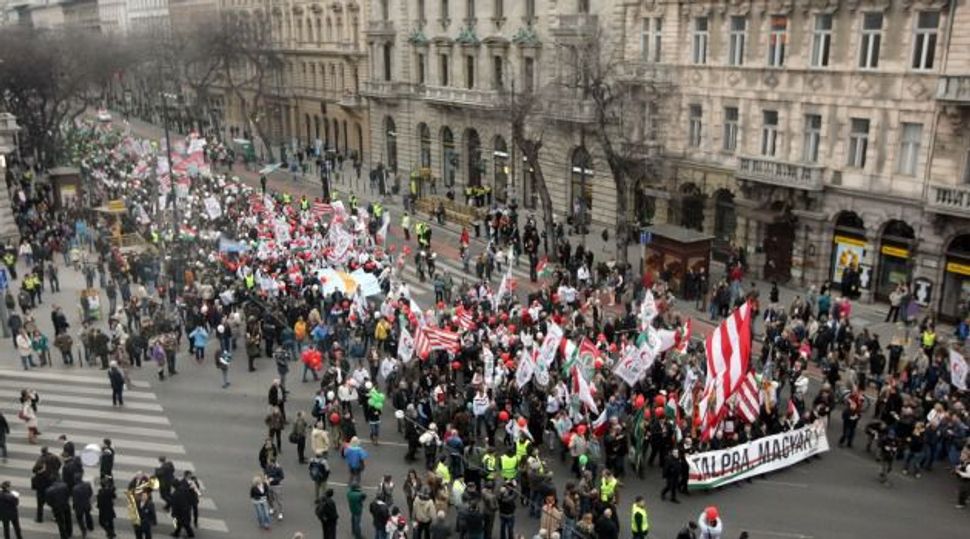 To launch its campaign for Hungary’s parliamentary election, the far-right Jobbik party, accused by critics of anti-Semitism, chose as its venue a former synagogue with a plaque on the wall commemorating 500 local Jews killed in the Holocaust.

The reaction was unsurprising: opponents turned up outside the synagogue in the city of Esztergom to protest at Jobbik’s presence, they heckled party leader Gabor Vona as he arrived, and the confrontation was broadcast on the evening news.

It was seen as another publicity coup for Jobbik on its path to entrenching itself on Europe’s political landscape, and for not much more than the $50 hourly cost of renting the former synagogue, now a municipal community centre.

When Jobbik shocked Europe four years ago by coming third in Hungary’s parliamentary election, many of its opponents predicted the party would soon implode.

It hasn’t. It is preparing to run in Hungary’s parliamentary election on April 6, and polls show it rivalling the leftist opposition for second place. The latest poll this month gave Jobbik 15 percent, not far from the 15.8 percent it won four years ago.

The party’s standing offers clues as to what might happen elsewhere in Europe as the continent gears up for elections to the European Parliament in which nationalists such as France’s Front National and Greece’s Golden Dawn are expected to perform better than ever.

Dozens of interviews and days spent at Jobbik campaign events point to the secrets of its staying power.

It deftly exploits disputes, such as the one over the synagogue, for free publicity, has managed to paper over the internal splits that have torn other far-right groups apart, and has built up a well-drilled, highly effective ground operation that bypasses traditional media to connect with voters.

“When we got into parliament in 2010, the experts said radical parties were often one-hit wonders,” Vona told Reuters at a news conference in February. “Jobbik proved it was a stable, long-term participant in Hungarian politics.”

Several analysts told Reuters that Jobbik could grow significantly stronger as it projects a milder image to voters, and one said it might become a government party in the future.

THE PATH TO PROMINENCE

In its earliest days a decade ago, Jobbik had no money and no connections.

Few people in the establishment wanted to be seen associating with a party that says homosexuality is an abomination, used to have a paramilitary wing decked out in swastika-like symbols, and has followers who say they hate Jews.

Even today, Jobbik is run on a shoestring. Its annual budget is 530 million forint ($2.34 million), most of it from a state allowance for which parties in parliament qualify automatically, according to the State Audit Office.

So Jobbik has found ways to get around its lack of cash.

Come campaign time, its volunteers set up tables on street corners to hand out leaflets. The party publishes a free weekly magazine, hand-distributed to mailboxes throughout Hungary.

A quarter of a million people follow the pages of Jobbik and Vona on Facebook, out of a population of 10 million. By comparison, the ruling Fidesz party has 150,000 followers and Prime Minister Viktor Orban 265,000.

Jobbik uses that network to reach its followers efficiently and takes every opportunity to underline that it is close to ordinary people and understands their concerns.

In 2012, a fight broke out in Devecser, western Hungary, between the minority Roma community and non-Roma residents. Jobbik quickly spread word and organised a rally there protesting against “Gypsy crime”, attracting national headlines.

Vona periodically works shifts in minimum wage jobs – a waiter, a construction worker – to show he is in touch with the common people, and broadcasts clips of it on YouTube.

While building the party, Vona had to fight off challenges to his leadership.

One power struggle, according to Jobbik insiders, involved Csanad Szegedi, a former Vona associate and a member of the European Parliament who has quit Jobbik.

Szegedi’s rivals leaked evidence that he was Jewish, a black mark against him in the eyes of many activists. They also released an audio recording of Szegedi offering bribes in exchange for his Jewish origins being kept secret. Szegedi later left the party. He declined to be interviewed for this article.

Others left over political disagreements. Balazs Lenhardt, one of the most radical members, quit Jobbik’s parliamentary group in 2012, arguing that it had gone mainstream.

The uniformed vigilante group Hungarian Guard, once a vital power base for Jobbik, was disbanded by the courts in 2009. Others groups popped up, jostling to become the Guards’ successor.

In August 2012, the infighting got so bad Vona issued a public appeal for it to stop and managed to contain the damage. In total, only four members of parliament quit the party out of the 47 elected on the Jobbik ticket in 2010.

At a busy intersection by Budapest’s Grand Boulevard, two Jobbik activists hand out leaflets with images of young, friendly faces, in a pitch intended to reach a broader cross-section of voters.

The moderate approach – accentuated by friendly TV ads – does attract some middle-class professionals. Roland Vancsics, a 37-year-old procurement manager, said he was a supporter.

“Jobbik represents national values strongly,” he said. “(It) dares to speak the truth and challenge the status quo.”

But Jobbik’s hardline roots often show through the new image.

Insiders say the party has close ties with kuruc.info, a website which has sections entitled “Jewish crime”, “Gypsy crime” and “Holokamu”, a pun on the words for Holocaust and lie, meant to denote that the Holocaust was fiction. It also carries election ads for Jobbik. The party denies ties to the website.

At a January rally in eastern Hungary, Jobbik parliamentary candidate Tibor Agoston used the phrase “Holokamu” in a joke about events planned to mark the anniversary of the Holocaust. He is still a candidate.

At the synagogue rally in Esztergom, a Reuters reporter saw representatives of a group called Betyarsereg (Army of Outlaws) providing security for the gathering. The group supports the Nazi notion of “Lebensraum,” or living space for favoured races. It said on its website that Jobbik had asked it to take care of security at the synagogue.

Jobbik has not replied to questions on Betyarsereg’s role or about whether Agoston was reprimanded for his comments.

At another Jobbik town hall meeting, in the southern part of Budapest, 54-year-old security guard Istvan Bednarik, there to support the party, explained his views on Jews.

“I will never like them, sure,” he said. “I am a heartfelt Hungarian. The Jews, the Gypsies, if they can assimilate, fine, if not, well, then tough luck.”