Does Jonathan Pollard Object to Freedom Swap With Jailed Palestinians? 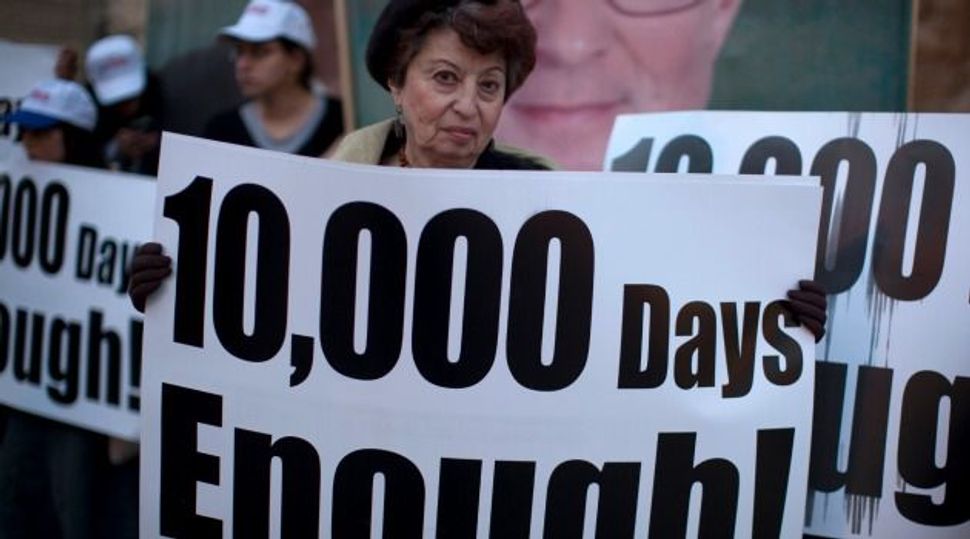 Secretary of State John Kerry met Israeli Prime Minister Benjamin Netanyahu for the second time in less than 12 hours on Tuesday in an effort salvage stalled peace talks with the Palestinians.

Kerry broke into his travel schedule on Monday for a flying visit to Jerusalem and headed straight back to Europe after his early morning discussions with Netanyahu.

There was no immediate word of any breakthrough and a Palestinian official said Kerry might return to the region late on Wednesday to see Palestinian President Mahmoud Abbas.

The negotiations appeared on the brink of collapse at the weekend, when Israel failed to press ahead with a promised release of several dozen Palestinian prisoners.

Israel wanted assurances the Palestinians would not abandon the talks, aimed at ending the decades-old Middle East conflict, when an initial deadline for an accord expires on April 29.

U.S. officials have said that a deal allowing negotiations to continue could include the release of Jonathan Pollard, who has spent more than 25 years in an American jail after being convicted of spying for Israel.

A freeze on construction in Israeli settlements in the occupied West Bank, land Palestinians want with the Gaza Strip and East Jerusalem for a future state, was also being discussed, officials said.

Sources close to the talks, who declined to be identified, said that under the proposed arrangement, Pollard would be freed before the Jewish holiday of Passover, which begins in two weeks’ time.

Israel, they said, would go ahead with the promised release of a fourth group of Palestinians, the last among the 104 it pledged to free as a confidence building measure under an agreement that led to the renewal of the talks in July.

A source said Kerry wanted Netanyahu to call a cabinet meeting on Tuesday to sign off on the proposed deal. Israeli officials declined to comment.

U.S. intelligence agencies have long opposed any early release of Pollard, who pleaded guilty in 1987 to charges of spying for Israel and U.S. officials said no decision on his release has yet been made.

Pollard, a U.S. citizen who was granted Israeli citizenship in 1995, is due for parole next year and his early return could provide Netanyahu with the leeway he may need to convince coalition hardliners who object to the release of more Palestinian prisoners.

However, Israeli Housing Minister Uri Ariel said on Tuesday he would oppose any such accord, telling Army Radio that Pollard himself was against being part of a prisoner exchange.

“I was personally told he is against being released in such a disgraceful deal,” said Ariel, a member of the nationalist Jewish Home party, arguing that Pollard deserved unconditional freedom and not to be swapped for Palestinian “murderers”.

Palestinians regard brethren jailed by Israel as heroes in a quest for an independent state. Israel views them as terrorists.

Kerry, who has visited the region more than 10 times in little more than a year as he strives to secure a peace deal, held talks separately upon his arrival in Jerusalem with Netanyahu and with Palestinian chief negotiator Saeb Erekat.

The focus of his mission appeared to have shifted from reaching an elusive framework agreement by April 29, including general principles for a final peace accord, to simply keeping both sides talking beyond that previously set deadline.

Kerry is due in Brussels on Tuesday and Wednesday for a NATO ministerial meeting that will focus on Ukraine and Afghanistan.

Does Jonathan Pollard Object to Freedom Swap With Jailed Palestinians?