White House Says No Decision Made To Release Jonathan Pollard 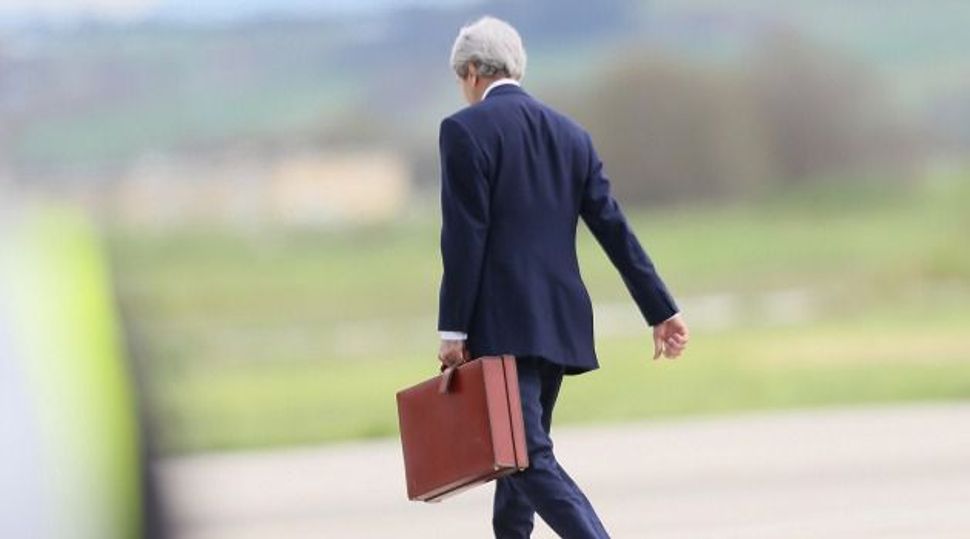 Lonely Path: John Kerry walks on an airport tarmac as he seeks to reach a deal to extend Mideast peace talks past an end of April deadline. Image by getty images

“Jonathan Pollard was convicted of espionage and he is serving his sentence,” Carney said.

“I don’t have any other update to provide you on Mr. Pollard’s status. There are obviously a lot of things happening in that arena and I am not going to get ahead of discussions that are under way,” he said.

His unexpected decision came just a day before U.S. Secretary of State John Kerry had been due to travel to Ramallah for talks aimed at finalising a complex, three-way deal that would enable the talks to continue into 2015.

However, a U.S. official said that trip would not now go ahead.

Abbas had pledged not seek to join world bodies during the U.S.-brokered negotiations, that are scheduled to run until the end of April and that have made little apparent headway.

Israel had promised in exchange to free more than 100 prisoners by the end of March, but failed to release the final batch, saying it wanted guarantees that the Palestinians would extend the negotiations beyond the April 29 deadline.

In his remarks to Palestinian leaders in the West Bank city of Ramallah, Abbas made clear he was not abandoning the negotiations, but blasted Israel’s delay in freeing prisoners.

“We are not doing this against America, but we still don’t see other ways forward,” Abbas said, before signing a packet of papers Palestinian officials said included 15 conventions of international and U.N. groups.

Precise details of what he had signed were not given.

“We don’t see any reason not to go and sign these agreements, with the knowledge that we are on the path to reaching an agreement through talks and through peaceful popular resistance,” Abbas said.

A Palestinian official insisted that Abbas was not abandoning negotiations with Israel.

“He have told the Israelis to stop playing their games,” the official said, speaking to Reuters on condition of anonymity. He added that Abbas had been “very disappointed” that all the prisoners had not been released.

The issue of Palestinians jailed by Israel is an emotive one in Palestinian society, and freedom for the inmates helps boost Palestinian support for Abbas’s peace seeking efforts against popular Islamist groups opposed to reconciling with Israel.

White House Says No Decision Made To Release Jonathan Pollard