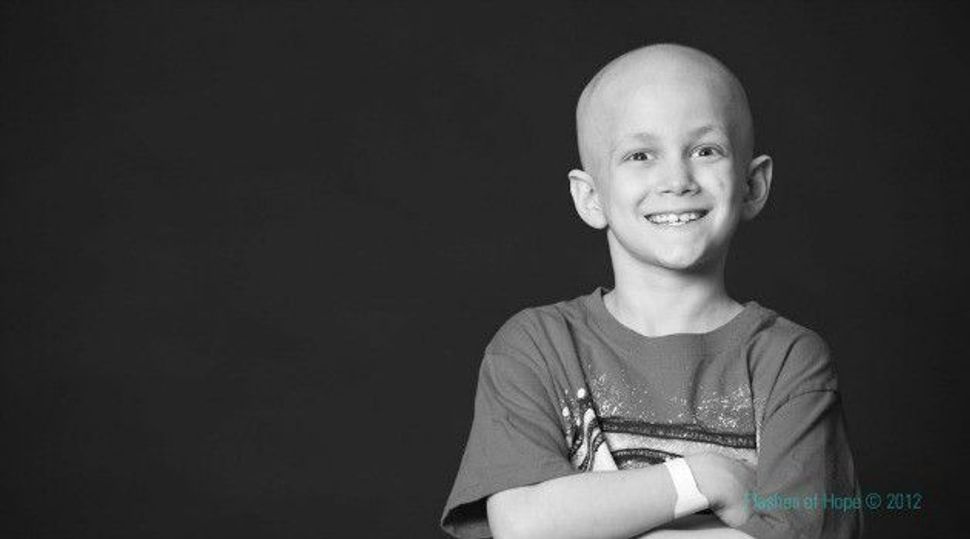 Image by FLASHES OF HOPE

(JTA) — This week, 73 North American rabbis will be missing something when they go to Shabbat services: their hair.

As part of a campaign that raised more than $570,000 for pediatric cancer research, approximately 60 male and female rabbis voluntarily shaved their heads on Tuesday night at the the Reform movement’s Central Conference of American Rabbis convention in Chicago. (Several rabbis who were unable to make it to the mass hair-shedding event shaved their heads elsewhere at different times.)

Many of the shaved were inspired by the death last December of Samuel Sommers, the 8-year-old son of Rabbi Phyllis and Michael Sommers, to refractory acute myeloid leukemia. Phyllis Sommers, an associate rabbi at Am Shalom in suburban Chicago who had documented her son’s struggle on a blog called “Superman Sam,” came up with the idea for the shaving campaign along with a fellow rabbi shortly before Samuel’s death.

While Samuel inspired the shaving campaign — done in partnership with St. Baldrick’s Foundation, a group that funds pediatric cancer research — it inspired a new Jewish ceremony.

Volunteers at Mayyim Hayyim, a nondenominational mikvah in suburban Boston, developed a series of blessings for individuals wishing to immerse in a mikvah, or ritual bath, before shaving their head or cutting their hair for a charitable purpose.

Rabbi Rebecca Einstein Schorr, one of the volunteer coordinators of the rabbinic head-shaving campaign, reached out to Mayyim Hayyim soon after Sam’s death asking if the nonprofit, which has developed numerous ceremonies involving mikvah immersion, had a ceremony for people shaving their heads for cancer research.

“We jumped on it,” Carrie Bornstein, Mayyim Hayyim’s executive director, told JTA. “What’s exciting is it’s a whole new way of thinking about what mikvah can do in our secular lives. There’s a whole religious component, the fact that they are doing this as rabbis, to this very secular occurrence. The idea of marking something in that way and being conscious of the transitions going on in our lives was very exciting.”

The new ceremony, which also can be used by people donating their hair to groups such as Locks of Love, consists of three immersions, each preceded by a blessing.

Originally called “36 Rabbis Shave for the Brave,” the campaign that culminated in the group head-shaving on Tuesday night ultimately recruited twice that many rabbis and raised more than triple its original fundraising goal of $180,000.

According to Rabbi Charles Briskin, one of the newly bald rabbis, the campaign brought in more money for St. Baldrick’s Foundation than any other single head-shaving event this year.

Founded in 2000, St. Baldrick’s coordinates group shave-a-thons in which volunteers shave their heads to show solidarity with cancer patients who have lost their hair to chemotherapy, raise awareness and solicit donations.

Although he did not opt to immerse in a mikvah beforehand, Briskin said in an email interview that “from a participant’s point of view, having my head shaved last night was truly a sacred experience.”

“Of the sixty or so shavees, some who knew Sammy and the Sommers well, others just met them, yet we all feel we know them well,” he wrote. “Last night, however, we were all part of one extended family, sitting, shaving, crying and laughing in solidarity.”

Afterward, Briskin said, “we just hugged one another, admired our new looks, and of course rubbed one another’s heads.”