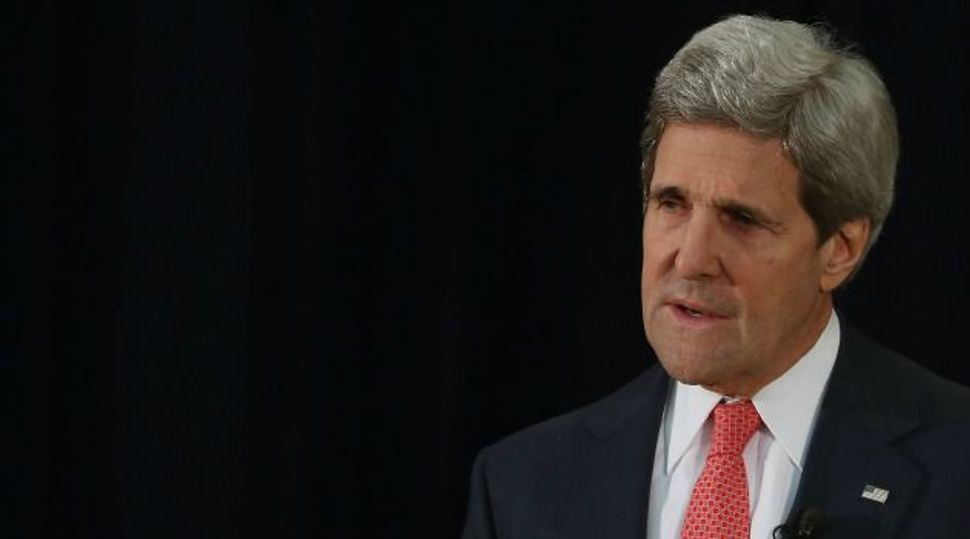 U.S. Secretary of State John Kerry said on Friday that Washington was evaluating whether it was worth continuing its role in Middle East peace talks, signaling his patience with the Israelis and Palestinians was running out.

There was a limit to U.S. efforts if the parties themselves were unwilling to move forward, Kerry said during a visit to Morocco after a week of setbacks.

“This is not an open-ended effort, it never has been. It is reality check time, and we intend to evaluate precisely what the next steps will be,” Kerry said, adding he would return to Washington on Friday to consult with the Obama administration.

Israeli and Palestinian negotiators are likely to meet on Sunday, together with U.S. envoy Martin Indyk, to discuss a possible way forward, a source familiar with the talks said.

White House spokesman Josh Earnest acknowledged that President Barack Obama shared Kerry’s frustration over “unhelpful” actions by both sides and the two men would discuss the path forward in the eight-month-old talks after the secretary of state’s return to Washington.

Kerry’s decision to declare a time-out could be an attempt to pressure Israel and the Palestinians to soften their entrenched positions but, should that fail, it might mark the beginning of the end for his signature diplomatic initiative.

By stepping away for now, Kerry is reminding the parties that he can ill-afford to focus endlessly on a fruitless Middle East peace process when other pressing international issues like the crisis in Ukraine demand more of this attention.

Abandoning the peace effort, however, also has its risks. It could deal another blow to Obama’s credibility in the Middle East, where he already faces criticism for a tepid response to Syria’s civil war and to the military’s takeover in Egypt.

“There’s tremendous upheaval in the region and internationally right now. Do you want to add to it?” asked Dennis Ross, Obama’s former top Middle East adviser. “We don’t need to see something we’ve been investing in collapse.”

The current phase of the Middle East peace process is not over, and it has broken down due to “unilateral steps” by both sides, Earnest said.

“It’s time for the Israeli leaders and the leaders of the Palestinian people to spend some time considering their options at this point,” he told reporters.

The negotiations were catapulted into crisis at the weekend when Israel refused to act on a previously agreed release of Palestinian prisoners unless it had assurances the Palestinians would continue talks beyond an initial end-April deadline.

Kerry flew to Jerusalem to try to find a solution. Just as he believed a convoluted deal was within reach, Palestinian President Mahmoud Abbas signed 15 international treaties, making clear he was ready to beat a unilateral path to world bodies unless he saw more movement from the Israelis.

A senior Palestinian official, Nabil Shaath, told Reuters that Abbas had not intended to upset Kerry, but rather to shine a spotlight on Israel’s failure to release the prisoners.

“I think (Kerry) will return because we have not abandoned the process,” said the veteran negotiator, speaking in Ramallah, the Palestinians’ administrative capital in the West Bank.

“We will continue these negotiations as we agreed, and I wish for once that America’s patience runs out – with Israel and not the Palestinians,” he said.

With each side looking to blame the other for the impasse, Israel’s centrist finance minister, Yair Lapid, said he questioned whether Abbas wanted a deal, pointing to a lengthy list of Palestinian demands published on Maan news agency.

These included lifting a blockade on the Gaza Strip, and freeing a group of high-profile prisoners, including Marwan Barghouti, jailed a decade ago over a spate of suicide bombings.

“(Abbas) should know that at this point in time his demands are working against him. No Israeli will negotiate with him at any price,” said Lapid, one of the more moderate voices within Prime Minister Benjamin Netanyahu’s rightist coalition.

Kerry has spent much of his first year as America’s top diplomat invested in the Middle East peace process, and has visited the region more than a dozen times.

He broke off twice from his current 12-day trip in Europe and the Middle East to see Israeli and Palestinian leaders in an effort to salvage the peace negotiations.

The talks have struggled from the start, stalling over Palestinian opposition to Israel’s demand that it be recognized as a Jewish state, and over the issue of fast-growing Israeli settlements in the occupied West Bank and East Jerusalem.