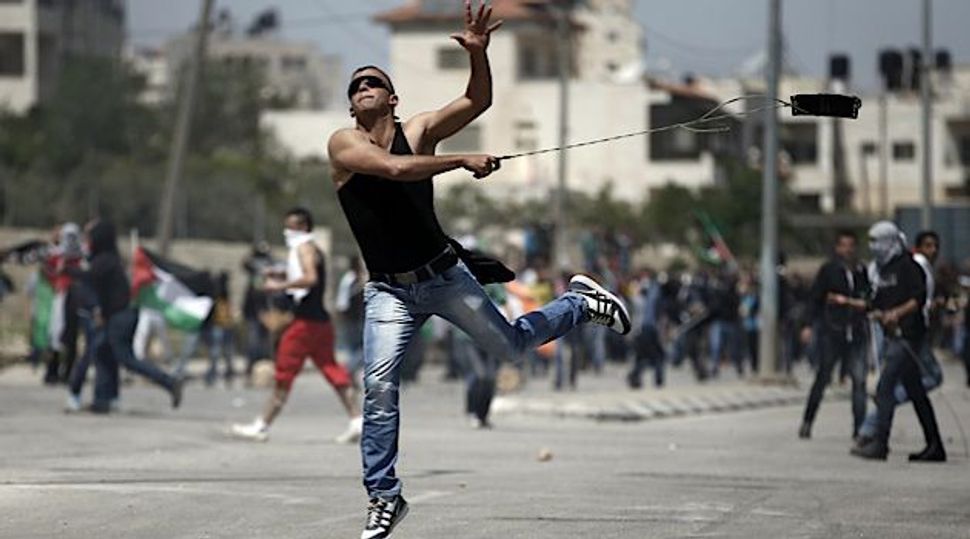 U.S. efforts to save Middle East peace talks from collapse showed little sign of progress on Monday amid threats from Israel to retaliate for what it saw as unilateral Palestinian moves towards statehood.

The U.S.-brokered negotiations plunged into crisis last week after Israel, demanding a Palestinian commitment to continue talking after the end of the month, failed to carry out a promised release of about two dozen Palestinian prisoners.

Palestinian President Mahmoud Abbas responded by signing 15 global treaties, including the Geneva Conventions on the conduct of war and occupations, on behalf of the State of Palestine, a defiant move that surprised Washington and angered Israel.

Both sides met on Sunday night “to discuss ways to overcome the crisis in the talks,” a U.S. official told Reuters. Palestinian sources said they would meet again Monday evening.

The wrangling attracted little interest on the streets, where both Israeli and Palestinians have become inured to decades of conflict and deadlock.

With the approach of the Jewish holiday of Passover, Israel’s best-selling newspaper, Yedioth Ahronoth, focused its main headline on the plight of the poor – carrying a report on Sunday’s talks at the bottom of page six.

Fewer than 20 Israeli lawmakers showed up for a special debate on the peace process on Monday in the 120-seat Knesset.

“We’re all too busy worrying about how to pay bills. Prices have risen and there are very few jobs,” said Tareq Younes, a Palestinian barber from a village near the West Bank city Ramallah.

The peace talks, which began in July, have stalled over Palestinian opposition to Israel’s demand that it be recognised as a Jewish state, and over settlements built on occupied land Palestinians seek for a country of their own.

An Israeli official described the Sunday meeting as “business-like” without elaborating. A Palestinian official said his side had submitted conditions for extending the talks beyond the original April 29 deadline for a peace deal.

Palestinians have said the signing of the international treaties last week was a natural progression after the U.N. General Assembly’s de facto recognition of a Palestinian state in 2012.

Israeli Prime Minister Benjamin Netanyahu, at a cabinet meeting on Sunday, promised retaliatory measures – which he did not specify – in response to the signings.

A senior official in Abbas’s Fatah party, said the Palestinians wanted a written commitment from Netanyahu’s government recognising a Palestinian state within all of the territory in the West Bank and Gaza Strip that Israel captured in the 1967 Middle East war, with East Jerusalem as its capital.

Israel has described those West Bank borders as indefensible and considers East Jerusalem as part of its capital, a claim that is not recognised internationally. Israel pulled out of the Gaza Strip, now ruled by Hamas Islamists, in 2005.

In addition, the Fatah official said, Palestinians were demanding a cessation of settlement activity and a prisoner release.

Palestinians fear settlements, viewed as illegal by most countries, will deny them a viable state and have condemned a series of Israeli construction projects announced while talks have been under way.

Stung by his diplomatic setback, just as a complex deal for the negotiations’ extension was emerging, U.S. Secretary of State John Kerry has said the United States was evaluating whether to continue its role in the talks, accusing both sides of taking unhelpful steps.

A monthly peace index, last published in March by the Israel Democracy Institute and Tel Aviv University, found 69 percent of Israelis “somewhat don’t believe” or “don’t believe at all” that the negotiations will lead to peace.

A poll conducted last month in the West Bank and Gaza Strip by the Palestinian Center for Policy and Research showed that about three-quarters of those surveyed believed chances for establishing a Palestinian state in the next five years are “slim or non-existent”.