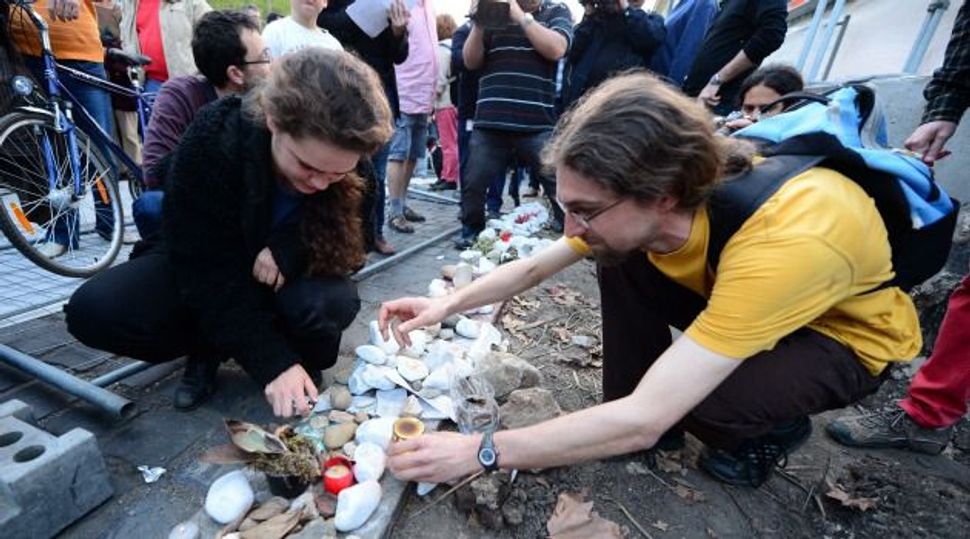 Protest and Mourning: Demonstrators light candles at a Jewish memorial stone of the Holocaust victims as participants pull down a mental fence around a planned memorial of the Nazi occupation of Hungary. Image by getty images

Members of the Jewish community were among the demonstrators protesting the construction of a controversial monument to the Hungarian victims of the German occupation.

Work on the statue began Tuesday in downtown Budapest, according to Klubradio, a news station known to be critical of the government. The protest was held that evening adjacent to the U.S. Embassy building, with protesters carrying signs saying the memorial is “a falsification of Hungary’s history.”

The Freedom Square monument, due to be completed in May, will pay tribute to “all Hungarian victims with the erection of the monument commemorating the tragic German occupation and the memorial year to mark the 70th anniversary of the Holocaust,” according to the Hungarian Government Information Center.

The Jewish community has argued that the memorial removes any responsibility from the Hungarian government of that time for the death of Hungarian Jews.

Along with the Jewish community, the protesters included Hungarian opposition politicians and civil activists.

Construction was halted before the general elections, held over the weekend, due to the opposition of the Jewish community.

Andras Heisler, president of the Hungarian Jewish community, told Klubradio that the start of construction was a surprise to the leadership of the Jewish community, coming just days after the elections in which the ultranationalist Jobbik party garnered 23 percent of the vote — an increase of 6 percent from four years ago.