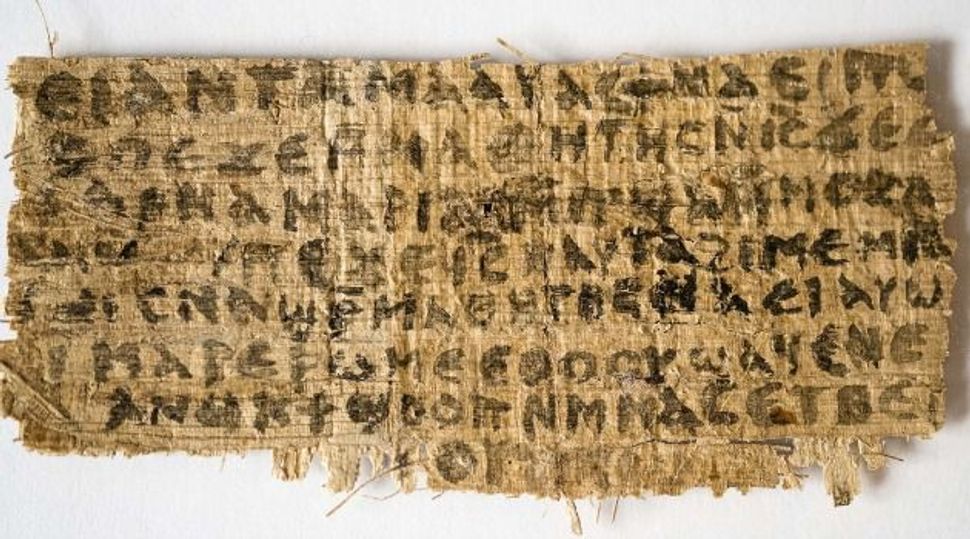 Scientists who examined a controversial fragment of papyrus written in Egyptian Coptic in which Jesus speaks of his wife concluded in papers published on Thursday that the papyrus and ink are probably ancient and not a modern forgery.

The existence of the fragment, known as the “Gospel of Jesus’s Wife,” was made public at an academic conference in 2012. It is seen by some as a glimpse of how ancient Christians thought while decried by others, including the Vatican, as an absurd fake.

Scientific studies performed over the last two years at various universities suggest both the ink and the papyrus are probably no newer than the 9th century and that the language and writing style are authentic for the period.

“All of that points towards the papyrus being ancient and the papyrus having been written on in antiquity,” Karen King, the Harvard Divinity School historian who first presented the fragment in 2012, told reporters on a conference call.

The results of the tests were published online by the Harvard Theological Review on Thursday.

Although the business card-sized fragment contains only a few scraps of sentences apparently torn from a larger text, they seem to express ideas not seen in the canonical Gospels of the New Testament.

“Jesus said to them, ‘My wife…,’” reads one snippet cut off by a torn edge, while other lines have Jesus suggesting that at least some women could be his disciples, roles filled in the canonical Gospels exclusively by men.

King has repeatedly said no one should mistake the fragment as evidence that Jesus actually had a wife, a notion held by few, if any, modern Christians. Rather, she said, the text shows how some ancient Christians were discussing the place of women and the role of marriage in the church.

“This was a piece of literature generated by Christians to affirm that women who are mothers or wives can be followers of Jesus,” King said on Thursday.

Among other tests, a team at Harvard’s Human Evolutionary Biology department analyzed the carbon in the fragment and dated the papyrus to between A.D. 659 and 869, roughly contemporaneous with an undisputed papyrus fragment of the Gospel of John.

A conservationist and an electrical engineer from Columbia University analyzed the chemical composition of the ink using micro-Raman spectroscopy and found it lacked the characteristics of modern ink but was similar to the Gospel of John ink.

The Theological Review also published a rebuttal by Leo Depuydt, an Egyptologist at Brown University, who said he reviewed the test results but remained convinced that the fragment was a modern forgery inexpertly daubed on an ancient scrap of blank papyrus.

King, the original presenter of the papyrus, said she welcomed the debate over the text’s ambiguities.

For all we know, she said, the sentence fragment continued after the tear with Jesus revealing his wife was in fact the church, or perhaps, King suggested: “My wife? Are you kidding? I don’t have a wife!”