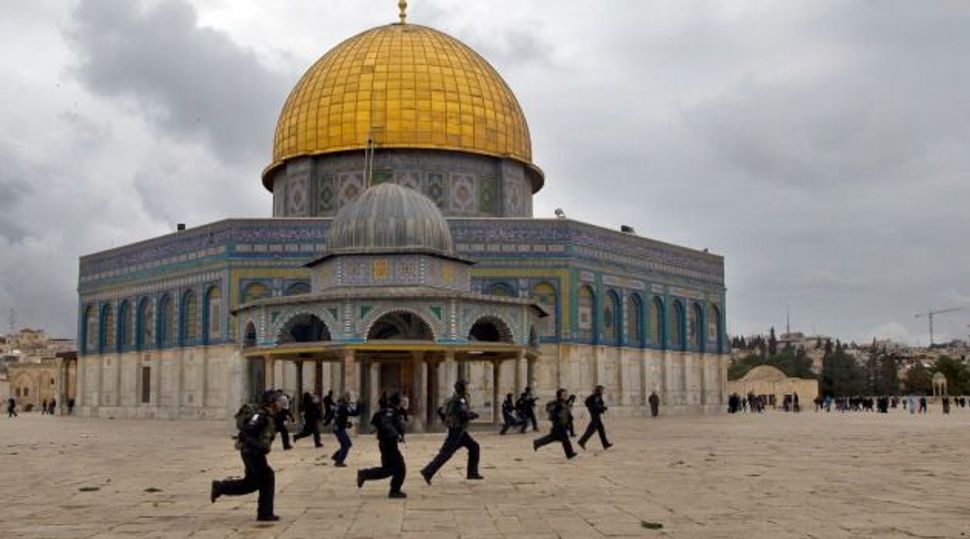 Israeli riot police entered one of Jerusalem’s most revered and politically sensitive religious compounds on Wednesday to disperse rock-throwing Palestinians opposed to any Jewish attempts to pray there.

The confrontation erupted after Israeli police tried to escort some 20 visitors onto the plaza revered by Muslims as the Noble Sanctuary and by Jews as the Temple Mount in Jerusalem’s walled Old City.

Palestinian youths, who a Reuters photographer said had gathered inside al Aqsa mosque, ran outside and threw rocks at the group. Israeli police in riot gear pushed onto the plaza and used stun grenades to disperse the demonstrators, but did not enter al Aqsa itself.

Tensions at the site run high during Jewish holidays – Jews are now celebrating Passover – when Palestinians oppose having Jews try to pray on the compound.

Aware of the volatile mix of politics and religion, Israel has largely stymied Jewish prayer on the plaza overlooking Judaism’s Western Wall since capturing East Jerusalem along with the West Bank in the 1967 Middle East war.

Police routinely escort foreign and Israeli visitors to the compound and intervene if they make any attempt to hold prayers at the site, which also houses the Dome of the Rock, where Muslims believe the Prophet Mohammad ascended to heaven.

Palestinian concerns have been heightened, however, by the fact that allies of Israeli Prime Minister Benjamin Netanyahu are among the most vocal advocates of Jewish prayer at the 25-acre complex. A posting on Tuesday on a Palestinian website, “All must defend al Aqsa”, called on Palestinians to “stop the Zionists” from entering the area during Passover.

Police spokesman Micky Rosenfeld said that once calm was restored, police forces left the plaza but closed it temporarily to visitors. He said no arrests were made at the scene.

Outside the complex, police fired tear gas at Palestinians who scuffled with them, witnesses said. The official Palestinian news agency, WAFA, reported that 25 people were treated for gas inhalation, and a medic said a woman was taken to hospital after being hit by a rubber bullet.

Sovereignty over the compound is at the heart of the Arab-Israeli conflict. Palestinians want to make East Jerusalem the capital of the state they aim to establish in the occupied West Bank and the Gaza Strip.

Israel, citing historical and biblical links, regards all of Jerusalem as its capital, a claim that is not recognised internationally.