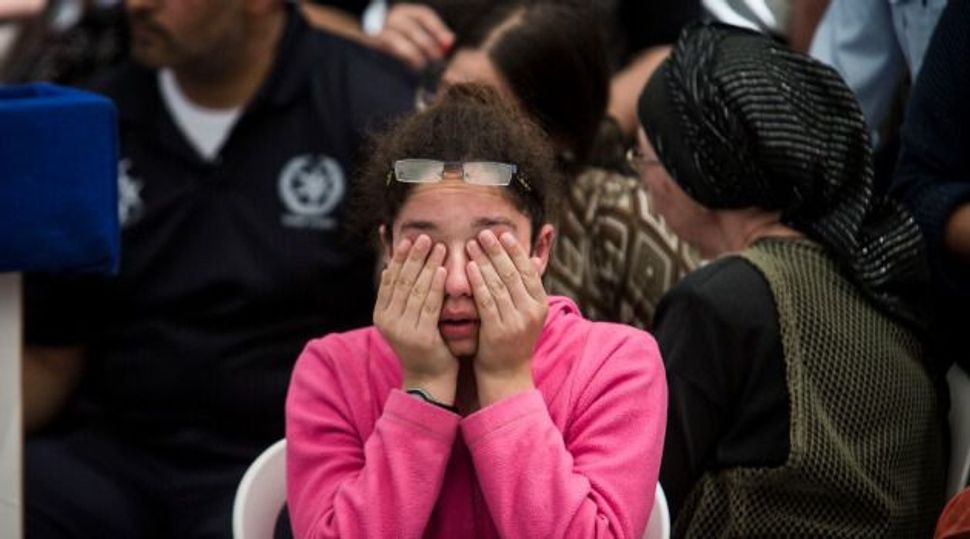 Hundreds attended the funeral for Israel Police Chief Superintendent Baruch Mizrahi, who was killed near Hebron while on his way to a Passover seder with his family.

“Instead of growing old together and watching the seasons pass, with the shriek of a bullet, I lost the love of my life,” his pregnant wife, Hadas, who was also shot twice in the Sunday afternoon attack, said during her eulogy Wednesday at the Mount Herzl military cemetery.

Mizrahi, 47, a father of five, was shot and killed while driving with his family to a Passover seder in the Jewish community in Hebron. His wife, who was in the car with him, and their 9-year-old son, who was in another car, also were wounded.

His wife told Ynet that despite being hit with two bullets, she took over the steering wheel and ordered her children to lie down on the floor of the car. She ordered rescue workers to immediately remove her children from the scene so that they would not see their dead father’s bullet-ridden body.

“I’ll be strong for the children, because that’s what Baruch would have wanted. We should also be thankful for the miracle that my children and I survived. We will stay strong and God willing, my children will grow and succeed, and that will be my victory against the terrorists,” Hadas Mizrahi told Ynet.

The Israeli military is continuing to search for the shooter or shooters, who are believed to have been using a Kalashnikov rifle.

Israeli Prime Minister Benjamin Netanyahu condemned the murder on Tuesday night, at the end of the first day of the Passover holiday.

“This reprehensible murder of a man who was traveling with his family to a meal for the Festival of Freedom is the result of the incitement for which the Palestinian Authority is responsible. The Palestinian Authority continues to constantly broadcast – in its official media – programs that incite against the existence of the State of Israel. Last night this incitement was translated into the murder of a father who was traveling with his family to celebrate the first night of Passover,” Netanyahu said in a statement.

The Palestinian Authority on Wednesday issued a condemnation of the murder.

“It hurts than an Israeli was killed,” Mahmoud al-Habash, the Palestinian minister of religious affairs, told reporters in Ramallah.”We condemn the murder of any person on the grounds that he is a person. The principle of killing and violence is totally forbidden.”

He added that: “I expect to hear a condemnation from the Israeli side after a Palestinian is killed, but that won’t happen.”

Ismail Haniyeh, the Hamas prime minister of Gaza Strip, praised the shooting, saying it “brought back life to the path of resistance” against Israel.