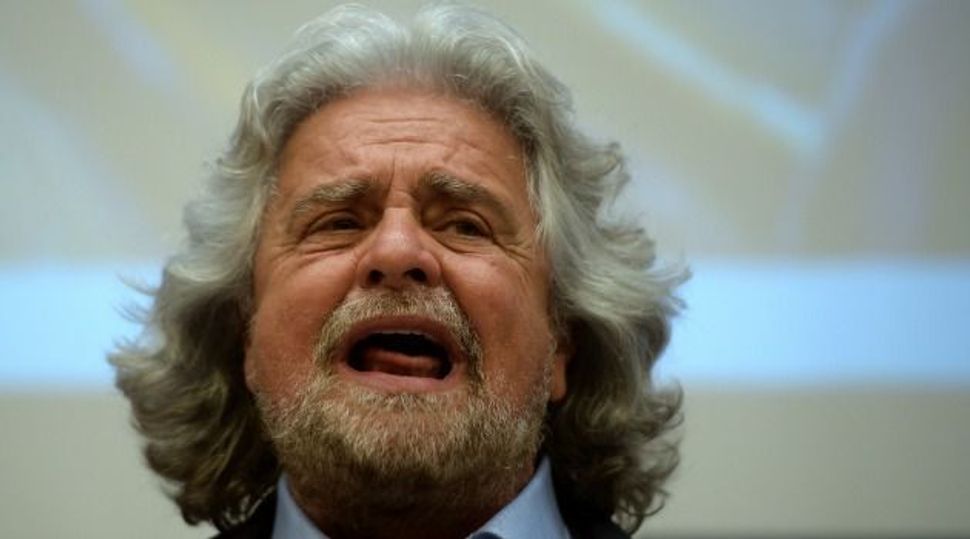 Beppe Grillo, an Italian comic turned politician, refused to apologize for his parody of a Primo Levi poem about the Holocaust to criticize Italy’s government and political system. Italian-Jewish leader Renzo Gattegna called the parody on Grillo’s blog an “obscenity.”

Grillo, who heads the anti-establishment Five Stars movement, paraphrased “If this Is a Man,” which served as the introduction to Levi’s memoir about his experiences in Auschwitz.

The parody, called “If This Is a Country,” lambasted the Italian media, President Giorgio Napolitano, the Italian government and disgraced former Prime Minister Silvio Berlusconi.

Grillo, whose movement won a quarter of the votes in the 2013 general election, also ran a photo of the entrance gate to Auschwitz doctored to read “P2 Macht Frei,” referring to the secret P2 Masonic lodge, banned in the 1980s as subversive after magistrates discovered that hundreds of politicians and other elites belonged to it. Gattegna, the president of the Union of Italian Jewish Communities, or UCEI, called the parody a “criminal desecration of the value of memory and of the memory of millions of innocent victims” that “offends all of Italy.”

He said it was an “infamous provocation” used to “goad the lowest anti-Semitic sentiments and ride the popular discontent that grows stronger in these times of crisis.”

In refusing to apologize, Grillo said Gattegna was “stupid, ignorant, not very intelligent and harms the community,” according to The Jerusalem Post.

Grillo also said, according to the Israeli newspaper, “When you touch the powerful, these things surface, these lobbies, lobbies of business. It is they who hide behind certain tragedies.

“Who is behind [Carlo] De Benedetti [an Italian Jewish industrialist], who is behind the banks, behind the finance?” This financial power, the Post quoted Grillo as saying, “causes Holocausts once a year, once a month, once a day … Rwanda, the gas in Syria … the financial and banking systems cause thousands of deaths every year.”