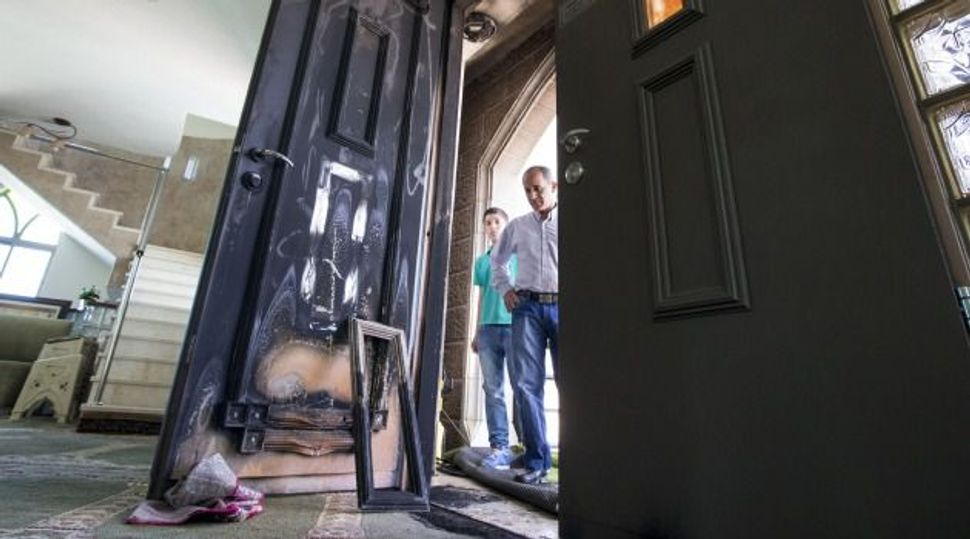 Israeli police are investigating the torching of the entrance to a mosque in northern Israel and the spraying of anti-Arab slogans on its walls.

A security camera at the Abu Bakr al Sadik Mosque in Um al-Fahmm filmed three unidentified men wearing masks writing “Arabs out” in Hebrew with a spray paint canister on an external wall and setting fire to part of the entrance on Thursday night before fleeing the scene, the news site Ynet reported.

On Friday morning, hundreds of Arab residents arrived at the mosque to inspect the damage, which locals believe was a “price tag” attack, the term Jewish ultranationalists use for reprisal and intimidation attacks against Arabs and Israeli security forces for actions that are seen as targeting Jews in West Bank settlements or elsewhere in Israel.

An unnamed senior police source told Ynet that the suspected perpetrators arrived at the scene driving a Suzuki Baleno Wagon, and that Israel has about 50 automobiles of that model.

“I believe we will find the people responsible, we have to make progress on this and bring good results or it will end up hurting us,” the police officer said.

Jamal Zahalka, a Knesset lawmaker for the Arab-Israeli Balad party, told Ynet that had residents caught the perpetrators, “they would not have made it out of here alive.”

Jamil Makhajna, the local imam, told Ynet he believed the perpetrators were “seeking to harm relations between the peoples.”