Mahmoud Abbas Suggests He Might Agree To Extend Peace Talks 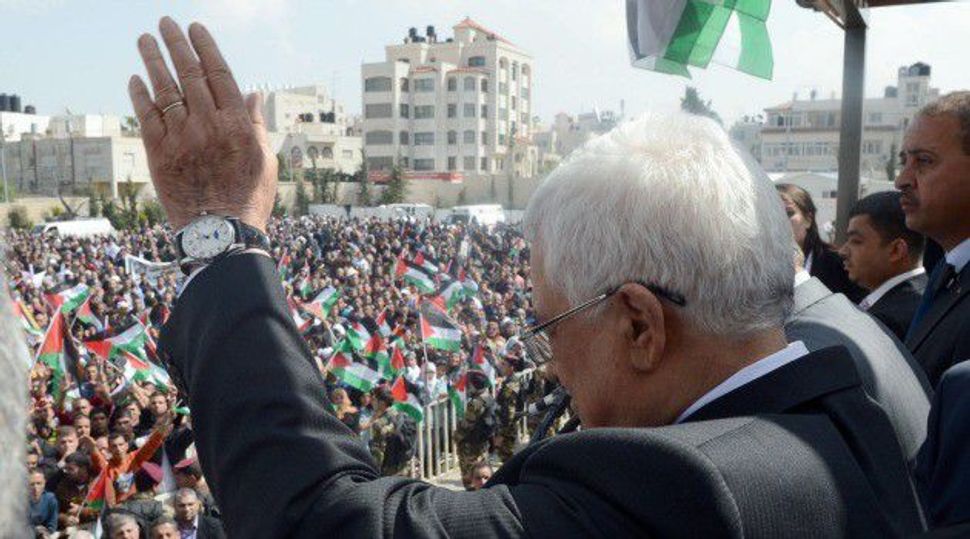 The Palestinians would extend the current peace negotiations if Israel agrees to a three-month settlement construction freeze during which the sides would agree on the borders of a future Palestinian state.

Palestinian Authority President Mahmoud Abbas told Israeli journalists in Ramallah on Tuesday that he also would require Israel to release the fourth group of 26 of 104 Palestinian prisoners that Israel agreed to release at the outset of the talks.

He also reportedly said that he would continue to coordinate security with Israel, despite the outcome of the talks.

“If Israel believes in the two-state solution, let us sit at the table and see where Israel is. In other words, let’s define the borders,” Abbas said.

He told reporters that if the talks end then the P.A. would “collapse,” leaving Israel responsible for the Palestinians in the West Bank. The remark appears to address statements attributed to Abbas in which he reportedly threatened to dismantle the P.A. in the wake of failed peace talks.

“Israel’s policies toward us have taken away any and all authority from the PA, therefore if it’s dismantled or not will not be relevant. We presented our framework for renewing the talks, and our willingness to continue the talks for nine more months, on condition that they focus on the core issues,” Abbas said.

Israeli and Palestinian negotiators were scheduled to meet Tuesday afternoon in Jerusalem in an attempt to extend the talks beyond their April 29 deadline.

Mahmoud Abbas Suggests He Might Agree To Extend Peace Talks