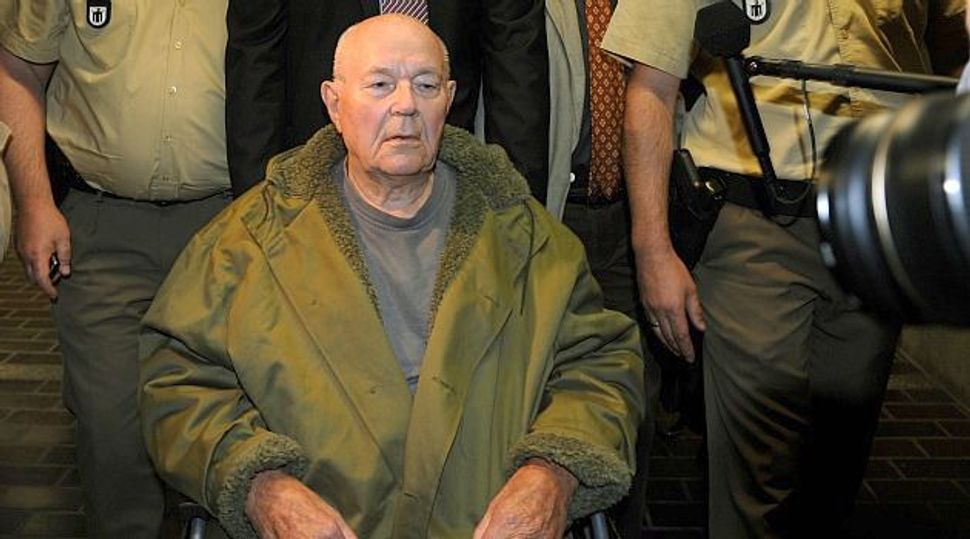 Mixed Bag: A new report praises the U.S. and Germany, which won a conviction of death camp guard John Demjanjuk, for their Nazi-hunting efforts. But it had harsh words for other states. Image by getty images

Germany has earned praise for its Nazi-hunting efforts in an annual report from the Simon Wiesenthal Center.

Sweden, Norway and several other European countries continue to fail miserably, however, according to Efraim Zuroff, the organization’s chief Nazi hunter.

According to the center’s 13th annual Status Report on the Worldwide Investigation and Prosecution of Nazi War Criminals, released Sunday in advance of Holocaust Remembrance Day, Germany and the United States both get “A” grades for “taking a proactive stance on” prosecuting the last living perpetrators of the the Holocaust.

Norway and Sweden got “Fs” because, though both countries lifted statutes of limitations against prosecution for war crimes, genocide and crimes against humanity in recent years, the new rules don’t apply retroactively.

Several other countries – Austria, Estonia, Hungary, Latvia and Lithuania – got Fs because they failed to apply their existing strong laws, Zuroff said.

“In a certain sense it is worse,” he told JTA, “because they are able to do it, they have the legal framework but choose not to.”

Germany stepped up its efforts as a result of the 2011 conviction in Munich of John Demjanjuk as an accessory to tens of thousands of murders in the Sobibor death camp. The conviction, which was on appeal when Demjanjuk died in March 2012, opened the door for murder prosecution for anyone proven to have been a death camp guard.

Since then, several alleged guards have been arrested, and trials are being prepared in some cases, while in others the individuals have either died or been deemed unfit to stand trial.

“The new German initiative is the most dramatic development in the hunt for Nazi war criminals in several decades,” Zuroff told JTA. It is “a very welcome step in the efforts to achieve maximum justice while it is still possible to do so.”

The center’s findings cover the period from April 1, 2013 until March 31, 2014 and awarded grades ranging from A (highest) to F to evaluate more than three dozen countries that were either the site of Nazi crimes or admitted Holocaust perpetrators after World War II.