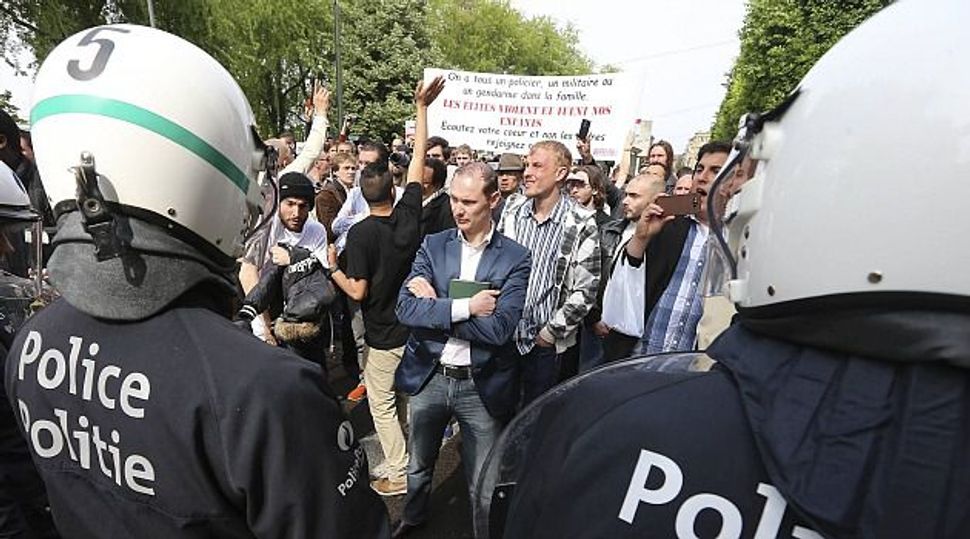 Summit of Hate: Belgian police confront demonstrators at a ‘summit’ of far-right anti-Semitic groups in Brussels. Image by getty images

Belgian police used a water cannon to disperse a crowd of people that gathered for an anti-Semitic event.

Some 500 people gathered in front of a bookstore in the Anderlecht municipality of Brussels on Sunday for the event, that Jewish groups called a “summit meeting for anti-Semites.”

No one was arrested in the standoff, which lasted several hours while the crowd waited for a top Belgian court to rule on an appeal to hold the event. The court did not rule and police moved in to disperse the crowd after several hours, DPA reported.

Earlier on Sunday, Eric Tomas, the mayor of Anderlecht— one of 19 municipalities that make up the Brussels autonomous region of the federal Belgian state, said he was banning the “European Congress of resistance,” saying it was a serious risk to public safety due to planned protests, the BBC reported.

The event was organized by Laurent Louis, a Belgian lawmaker with a record of anti-Semitic and anti-Israel statements. One of the speakers invited was the French comedian Dieudonne M’bala M’bala, who has seven convictions for inciting racial hatred against Jews.

The Belgian League Against Anti-Semitism, or LBCA, on Friday filed a complaint with the Brussels prosecutor against the event, saying that it would be “a day of hate that would serve as a platform for the worst gathering of anti-Semite authors, theorists and propagandists that our country has seen since the end of World War II.”

“The Belgian authorities ultimately reacted positively and promptly to our requests,” Joel Rubinfeld, president of the LBCA, told JTA Sunday. His organization, he said, has been monitoring the planned gathering for the past two weeks.

Organizers had kept the location of the congress secret until Saturday, when it was announced on Facebook that it would to take place at the Akdeniz book store in Anderlecht. Louis on Sunday urged participants to show up at the planned venue despite the possibility of the event being shut down.