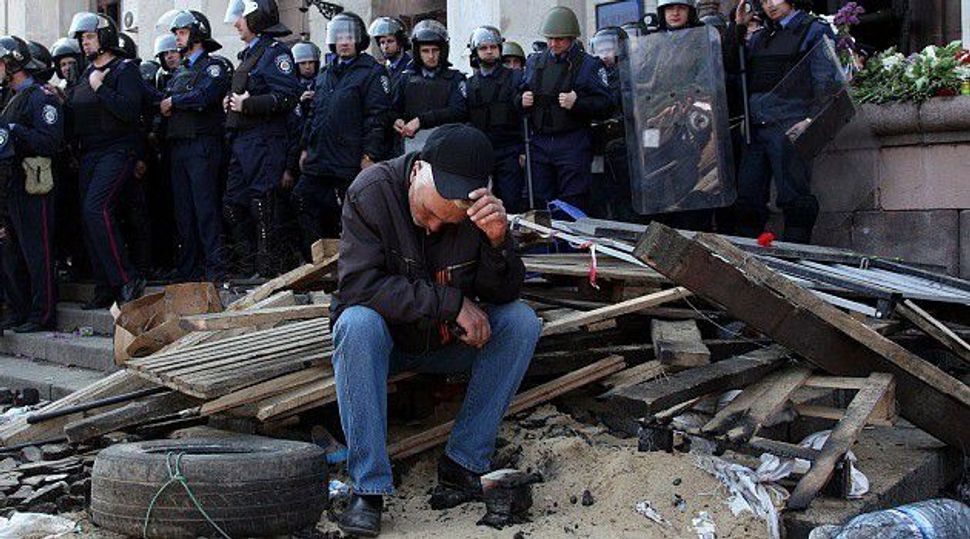 Not Leaving: Despite a spasm of violence that killed dozens, Odessa’s Jewish community insists it has no plans to leave the flashpoint city. Image by getty images

Leaders of the Jewish community of Odessa, Ukraine, denied reports about the existence of evacuation plans for the city’s Jews.

“In connection with reports on the planned evacuation of the Jewish community of Odessa: No such plans exist,” Berl Kapulkin, a spokesperson for the local Chabad community, said in a statement that was published Tuesday on the website chabad.odessa.ua.

Titled “rebuttal,” the statement concerned a report published Sunday in an Israeli daily newspaper, which said that several community leaders told the paper that “Odessa’s Jews are prepared to evacuate should the violence” in the Ukrainian city get significantly worse.

The reports followed skirmishes last week between pro-Russian protesters and Ukrainian nationalists which resulted in multiple casualties. The clashes were part of a bigger mobilization by pro-Russian protesters and militias that last month began staging acts of disobedience, sometimes with secessionist sentiments, throughout cities in eastern Ukraine, where many ethnic Russians live.

Tania Vorobyov, a spokesperson for Beit Grand, Odessa’s largest Jewish community center and a major partner of the local office of the American Jewish Joint Distribution Committee, or JDC, told JTA Wednesday that “the reports about evacuation are baseless rumors. Jews in Odessa are worried about the violence like all other Odessans but have no special plans to leave as a community.”

In February, a revolution that had been simmering since winter ended with the ousting from power of the government of former president Viktor Yanukovych. The revolution began with protests over Ukraine’s refusal to further ties with the European Union, which critics perceived as proof of Yanukovych’s pro-Russian stance. Russian-backed troops took over the Crimean Peninsula in March. Russia has since annexed the area, which used to be part of Ukraine.

The Jerusalem Post on Sunday quoted Refael Kruskal, head of Tikva, a small Jewish charity group from Odessa, as saying that evacuation plans are underway. The paper also reported that over the weekend, 20 buses had been parked outside the city’s Chabad center.

But Kapulkin, the center’s spokesperson denied this assertion.

“Odessa’s citizens’ (including Jews) were shocked by the tragedy” of the weekend clashes, Kapulkin wrote, “but we do not see any immediate danger to the Jewish community. So no buses with open doors, no running motors ready to go.”

Odessa, home to some 40,000 Jews, has a multitude of Jewish organizations whose relations are often strained by competition and personal rivalry.