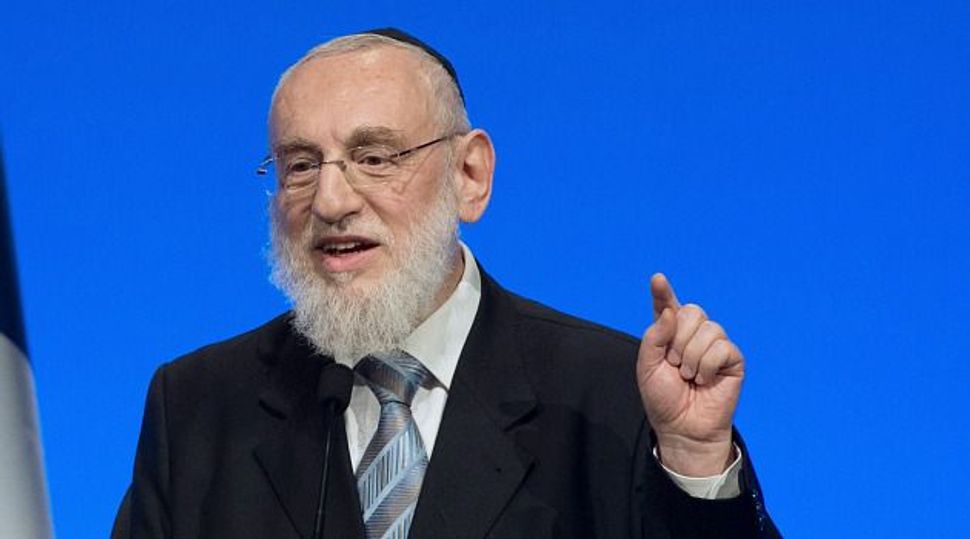 French Chief Rabbi Michel Gugenheim denied allegations that he had helped extort $120,000 from a woman who needed his signature to get a religious divorce.

The family of the woman, who was not identified, on March 18 filed a deposition containing the allegation against Gugenheim and two members of his rabbinical court at a police station in Paris’ 19th arrodinssement, the L’Express weekly reported on May 8.

The family of the 28-year-old woman had made a secret video recording of their March 18 appearance at a Paris rabbinical court presided by Gugenheim, the interim chief rabbi of France, L’Express reported.

In the recording, Gugenheim endorsed the ex-husband’s demand that the woman pay him a little over $40,000, according to L’Express, and was heard saying: “This is the price of her freedom.”

One rabbinical judge, or dayan, asked the woman’s family to write a check for $120,000 as a donation to the Sinai religious institution, explaining that the French tax authority would reimburse 66 percent of their donation in keeping with Sinai’s charity status, L’Express reported.

According to the arrangement, Sinai would transfer 30,000 euros, or $41,310, to the husband and keep the remaining amount.

Contacted by L’Express, Gugenheim denied any wrongdoing but, citing confidentiality obligations, declined to elaborate. “My only error was to not recognize the excessive and provocative attitude of this family. This is a ruse to undermine the Paris Beth Din,” he said, referring to his rabbinical court.

The woman received her get, or religious divorce, but her family threatened to file a criminal complaint for extortion against the rabbinical judges and the ex-husband and submit the video recording as evidence unless the check is returned, according to L’Express.

But the woman’s brother was quoted as telling L’Express: “Michel Gugenheim authorized this. He favors this extortion of funds.”

Gugenheim, who is also the chief rabbi of Paris, and Olivier Kaufmann have been sharing the duties of the country’s chief rabbi since April 2013, when Rabbi Gilles Bernheim resigned the post amid revelations that he had used an academic title that he did not really possess.