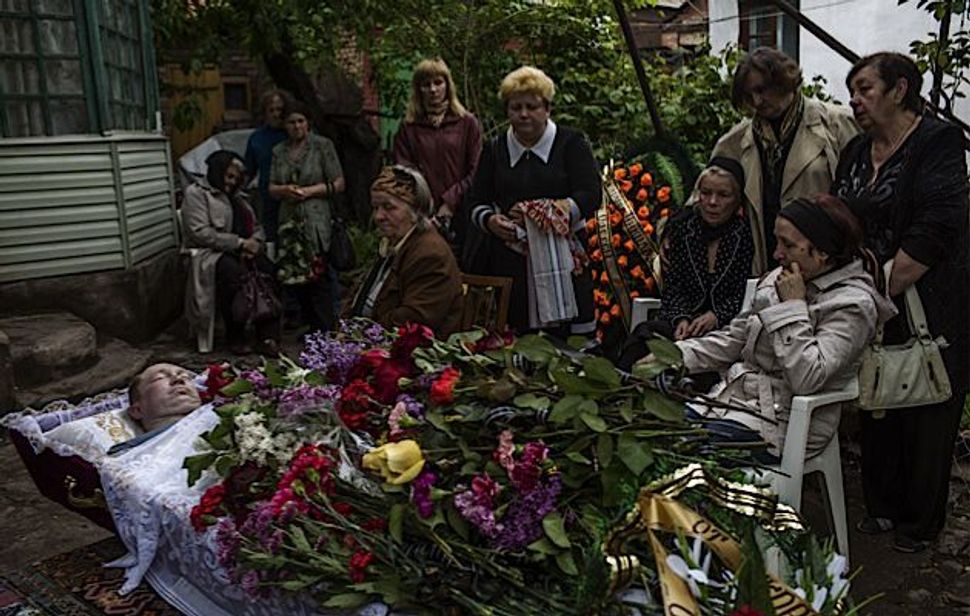 Relatives of Alexey Vorobyov, a pro-Russian activist killed during fierce fighting between Ukrainian troops and pro-Russian rebels three days ago, mourn at his funeral. Image by getty images

Chaos and criminal activity in eastern Ukraine are causing anxiety and increased emigration by Ukrainian Jews, leaders of that community said.

“There is increase in emigration by Jews from Ukraine with 300 people immigrating to Israel in March alone, but this is not the result of any anti-Semitism but of anxiety and fear from criminal activity and chaos,” Josef Zissels, chairman of the Vaad Association of Jewish Organizations and Communities of Ukraine and a vice president of the World Jewish Congress, said Friday.

Zissels rejected recent reports that Jews were preparing to evacuate Odessa in southern Ukraine en masse. “These reports were false and of a provocative nature,” he said.

Zissels, who spoke at a roundtable discussion of a dozen-odd community leaders from Ukraine, was commenting on Jewish Agency for Israel figures that showed that 762 Ukrainian Jews immigrated to Israel in the first quarter of 2014 — an increase of 52 percent over the average of 500 people who immigrated in the corresponding periods of 2009 to 2013. On average, 1,900 immigrants came to Israel from Ukraine per year in those years, according to Israel’s absorption ministry.

“There are bandits, men with rifles, who are patrolling the streets of some cities in eastern Ukraine and this is causing many Jews and non-Jews to want to leave,” Zissels told JTA at the roundtable discussion, organized by the Ukrainian Jewish Encounter, an international not-for-profit established in 2008 to further dialogue between Ukrainian Jews, non-Jews and their diasporas.

The roundtable was part of a symposium, “Ukraine: Thinking Together,” organized by the Encounter together with The Ministry of Foreign Affairs of Ukraine, the U.S. embassy in Kiev and several other bodies.

Haydar Alexander, CEO of the Reform movement in Ukraine, said that more members of his community in Kiev were contemplating immigrating than before the political upheaval that gripped Ukraine in November.

Ukraine will hold presidential elections on May 25, the first since the ouster from power in February of the government of former president Viktor Yanukovych, who fled to Russia amid a wave of protests over his alleged corruption and perceived allegiance to the Kremlin.

Russian-backed militias subsequently seized the Crimean Peninsula from Ukraine, which was annexed to Russia in March, and some areas of Donetsk and Slovyansk in eastern Ukraine, an area which is heavily populated by ethnic Russians.