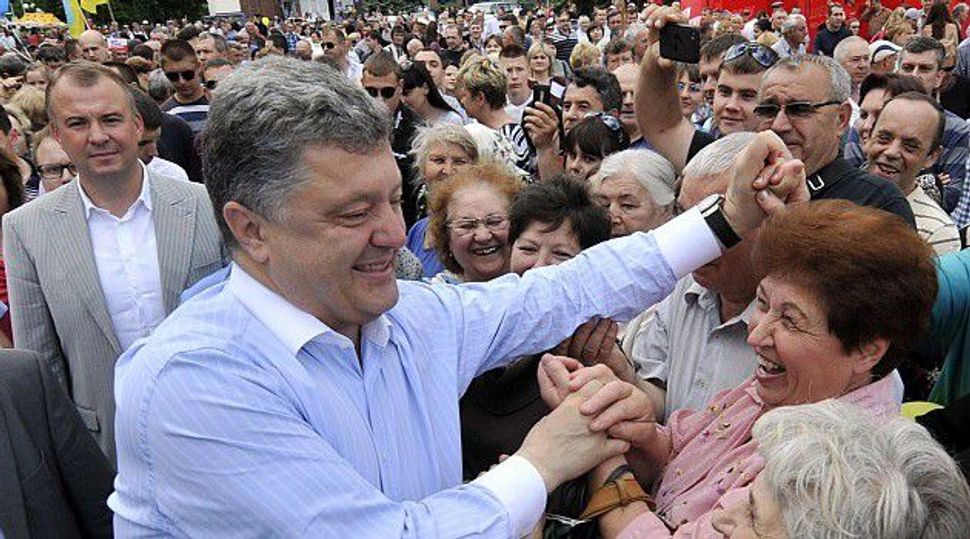 Billionaire Petro Poroshenko claimed Ukraine’s presidency on Sunday after exit polls gave him an absolute majority in a first round of voting and, vowing to end a conflict with pro-Russian rebels, he pledged to align his country with Europe.

Exit polls gave Poroshenko, a confectionery magnate with long experience in government, more than 55 percent of the vote, well ahead of former Prime Minister Yulia Tymoshenko in second place with just over 12 percent. If his majority is confirmed by results on Monday, there will be no need for a runoff vote on June 15.

Ukrainians, weary of six months of political turmoil, hope their new president will be able to pull the country of 45 million people back from the brink of bankruptcy, dismemberment and civil war that prevented voting in parts of the Russian-speaking east.

“All the polls show that the election has been completed in one round and the country has a new president,” Poroshenko, 48, told a news conference. His businesses have earned him a fortune of more than $1 billion and the nickname the “Chocolate King”.

At his campaign headquarters, Poroshenko told supporters the majority of Ukrainians had given him a mandate to continue a course of integration with the rest of Europe but said his first priority was to travel to the east of the country to end “war and chaos” caused by armed pro-Russian separatists there.

He said he was ready to negotiate with opponents and offer amnesty to those who laid down weapons – but he ruled out any negotiation with killers and “terrorists”.

Pro-Russian separatists barred people from voting in much of Ukraine’s Donbass industrial heartland, turning the main city of Donetsk into a ghost town, after days of violence in the surrounding region in which at least 20 people were killed.

Asked by a foreign journalist about relations with Russia, Poroshenko, speaking in fluent English, said he would insist on respect for Ukraine’s “sovereignty and territorial integrity”. He also said Ukraine would never recognize Russia’s “occupation of Crimea”, the Black Sea region seized by Moscow in March.

But Poroshenko will have to try to find common ground with Ukraine’s giant northern neighbor, which provides most of its natural gas and is the major market for its exports.

He was later quoted as saying that he would “certainly” meet Russian President Vladimir Putin since Russian involvement was essential to establishing stability.

Sunday’s election marked the culmination of a revolution that erupted in November, forced pro-Russian President Viktor Yanukovich to flee in February and spiraled into an existential crisis when Moscow responded by declaring its right to invade Ukraine to protect its large Russian-speaking population.

The pro-Moscow separatists have proclaimed independent “people’s republics” in the provinces of Donetsk and Luhansk and blocked voting there as that would imply they were still part of Ukraine. No vote was held in Russian-annexed Crimea.

Ukrainian officials hailed a high voter turnout in much of the sprawling country but said only about 20 percent of polling stations in the two restive eastern regions had functioned. One man was reported killed in a shootout in Luhansk region after what officials said was a militant raid on a polling station.

After a truce during the election weekend, government forces would shortly resume the “active phase” of their “anti-terrorist operation”, a Ukrainian minister told local media.

Putin, who branded eastern Ukraine “New Russia” last month, has made more accommodating noises of late, saying on Saturday he would respect the voters’ will. He has announced the pullback of tens of thousands of Russian troops massed on the border.

But the absence of more than 15 percent of the potential electorate from the election could give Moscow an excuse to raise doubts about the victor’s legitimacy and continue applying pressure on the new president in Kiev.

There was no immediate official reaction from the Kremlin, but a senior figure in the ruling party made clear how Russia may emphasize the gaps in voting in the Russian-speaking east.

“It is hard to recognize the legitimacy of elections when tanks and artillery are wiping out civilians and a third of the population is driven to the polling stations at gunpoint,” deputy parliamentary speaker Sergei Neverov wrote on Facebook.

Poroshenko is hardly a new face in Ukrainian politics, having served in a cabinet under Yanukovich and also under a previous government led by Yanukovich’s opponents. This breadth of experience has given him a reputation as a pragmatist capable of bridging Ukraine’s divide between supporters and foes of Moscow.

He nevertheless was a strong backer of the street protests that toppled Yanukovich and is thus acceptable to many in the “Maidan” movement of pro-European protesters who have kept their tented camp in the capital to keep pressure on the new leaders.

Yanukovich fled in February after more than 100 people were killed, and Moscow refused to recognize the interim leaders in Kiev, describing them as a fascist junta who threaten the safety of millions of Russian-speakers.

Tymoshenko, freed from jail on the day Yanukovich fled to Russia, appeared to accept her defeat by a long-time rival, saying in a brief appearance that the vote had been fair.

Ukrainians hope the vote can help ease the crisis because Moscow could not so quickly dismiss an elected leader with a solid mandate.

The United States and the European Union also view the election as a decisive step towards ending their worst confrontation with Moscow since the Cold War.

Their response to Russian interference in Ukraine so far has been limited to freezing the assets of a few dozen Russian individuals and small firms. But they have threatened to take far more serious measures, even targeting whole sectors of Russian industry, if Moscow interferes with the vote.

In a statement, U.S. President Barack Obama did not pre-empt the results by naming Poroshenko but he praised Ukrainians for turning out to vote despite violence and said the United States looked forward to working with Ukraine’s new president.

“This election is another important step forward in the efforts of the Ukrainian government to unify the country and reach out to all of its citizens to ensure their concerns are addressed and aspirations met,” he said.

German Foreign Minister Frank-Walter Steinmeier said: “Whether Poroshenko manages to unite a divided country will depend above all on how the constitutional process will now be approached, what kind of messages will be sent to the eastern region … also to the Russian-speakers.”

Constitutional changes since Yanukovich’s fall will leave Poroshenko with less power than his predecessor once he is formally sworn in, probably not before next month. He will share power with Prime Minister Arseny Yatseniuk and parliament.

Poroshenko, who has worked closely with the liberal Yatseniuk in recent months, said there should be a parliamentary election before the end of the year.

‘VIOLATION OF MY RIGHTS’

Some Ukrainians in the east who tried to vote complained about being denied their democratic right.

“What kind of polls are these? Things are bad,” said pensioner Grigory Nikitayich, 72, in Donetsk.

Ukrainian soldier Ivan Satsuk, manning a roadblock near the eastern port of Mariupol, said he would not have voted for Poroshenko if he had been able to cast a ballot amid the violence but he was pleased the election had ended so quickly.

“I will support him now,” he said. “What we need soonest is legitimate authorities with a strong mandate to start dealing decisively with all this separatist mess.”

At the headquarters of the Donetsk People’s Republic, the pro-Russian separatist movement that declared independence after a makeshift referendum two weeks ago, a woman named Klavdia was dismissive of Kiev’s attempts to hold an election.

“We don’t pay attention to other countries’ elections, really,” she said. “We just had a big laugh of them today – not a single polling station was opened in Donetsk today because their election officials didn’t show up.”

Yatseniuk hailed Sunday’s election as a victory for democracy and the rule of law despite the disruption in the east. “Efforts by the Russian Federation and the terrorists it finances to derail the elections are doomed to failure. We will have a legitimate head of state,” he said before polls closed.

Putin pledged on Saturday to “respect” the people’s choice and work with Ukraine’s new administration – a conciliatory move during an economic forum at which he had acknowledged U.S. and EU sanctions over Ukraine were hurting the Russian economy.

He played down talk of a return to Cold War with the West and dismissed the idea he was bent on restoring the former USSR, whose collapse he has in the past lamented.