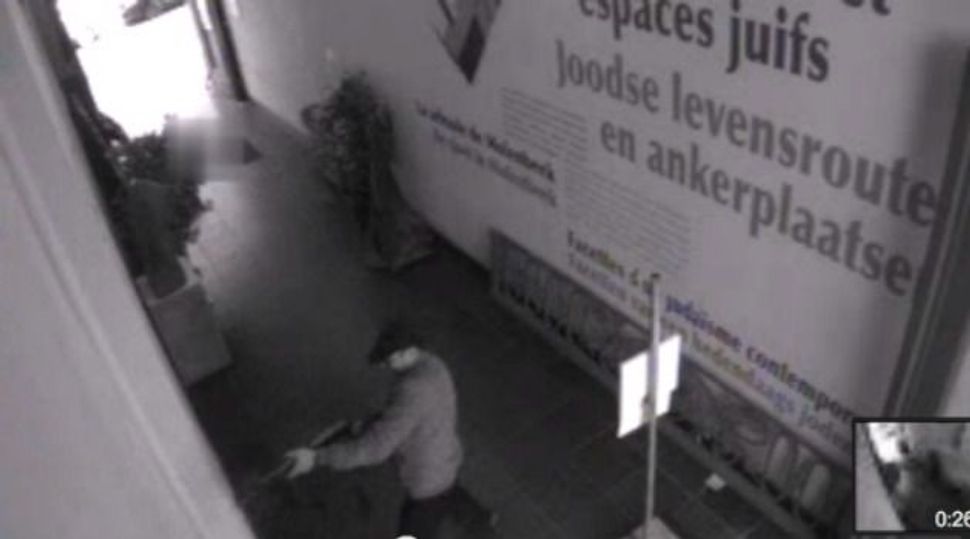 The methodical gunman who killed four people at the Jewish Museum in Brussels reportedly videotaped his own attack with a camera mounted on his chest.

The shocking report — which raises the grim possibility that the attack will be used for anti-Semitic propaganda — came as Belgian police released official security footage of the shooting that it hopes will help them catch the cold-blooded killer.

The black-and-white security camera footage from Saturday’s attack shows a man entering the museum’s corridor carrying two bags. Placing them on the ground before the actual entrance to the museum, the man produced a firearm from one of the bags which appears to be an AK-47 assault rifle and fires a burst of shots at people inside while remaining near the entrance to the museum.

In the 29-second video, the man, who is wearing a black baseball cap, is seen placing the rifle back inside one of the bags and escaping on foot.

The shots killed two Israel tourists and a French citizen on the spot. A fourth victim, whom the European Jewish Congress’ crisis management center identified as a 23-year-old employee of the museum named Alexandre Sterns, was mortally injured and died on Sunday.

The Israelis who died in the attack were identified by the Israeli foreign ministry as Emanuel and Miriam Riva, a married couple in their fifties from Tel Aviv.

Police asked for the public’s help in identifying the perpetrator, whom witnesses said arrived at the scene in an Audi car that was driven by another man whom police suspect was an accomplice.

Approximately 2,000 people gathered on Sunday outside the museum, which is located 400 yards away from the Great Synagogue of Europe, for a silent demonstration in memory of the dead.

In response to the attack, the Jewish museum in Rome is staying open late into the night Monday, free of charge.

Ban’s spokesman said in a statement that the secretary general “reiterates his strong condemnation of all forms of racism, racial discrimination, xenophobia and related intolerance and trusts that Belgian authorities will do everything possible to bring the perpetrator or perpetrators of this crime to justice swiftly,”

In response to the incident, the Jewish Museum in Rome is opening its doors for free, late into the night.

The museum, located in the complex of Rome’s main synagogue, will open to the public at 8:30 p.m. Monday night and stay open “until late at night,” the Rome Jewish community announced.

“It is a concrete gesture to demonstrate how Judaism wants to remember and at the same time launch a message of courage,” the announcement read.