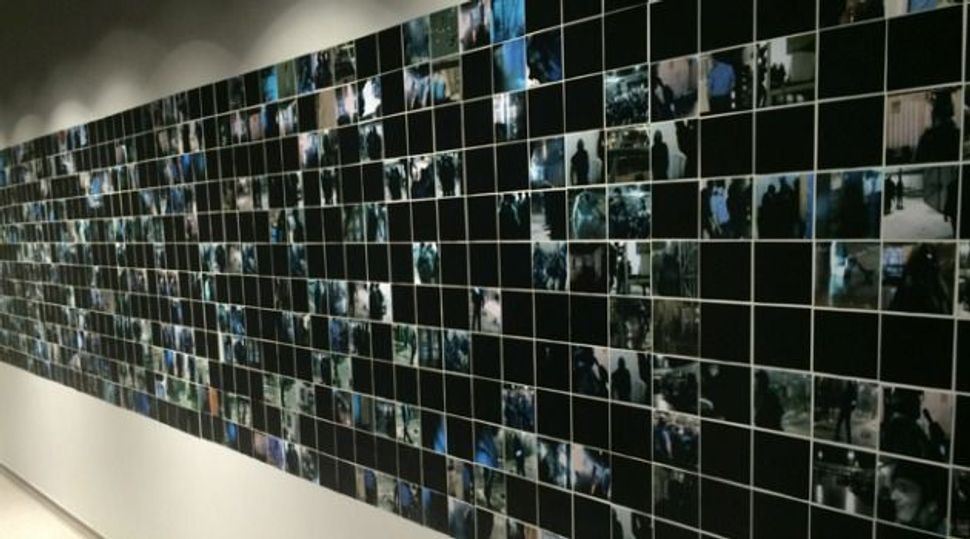 Image by courtesy of Rehab Nazzal

The City of Ottawa will not close an art exhibit denounced as a glorification of terror by Israel’s embassy and the local Jewish community.

“Invisible,” the creation of Toronto-based Palestinian artist Rehab Nazzal, focuses on “Palestine … and its military occupation by Israel,” according to a gallery brochure. The exhibit, which is scheduled to end June 22, has been on display at a gallery inside Ottawa City Hall since May 9.

Israel’s embassy in the Canadian capital said the exhibit “reflects a culture of hate and incitement that contradicts the values of Canada as a guardian of peace and champion against terror.”

Rafael Barak, Israel’s ambassador to Canada, met last week with Ottawa Mayor Jim Watson to discuss “the problematic nature of the exhibit, especially because it does not portray ‘artists, activists, writers and leaders,’ as is presented in the pamphlet, but known terrorists,” said a statement from the embassy a day after the meeting.

The statement added that the artist is a relative of Khalil Nazzal, who masterminded the Maalot school massacre in Israel that took place 40 years ago this month that killed 22 children and three adults.

While Barak was “pleased” to learn through his meeting with the mayor that the exhibit “does not reflect his values or the City of Ottawa,” he said the artworks “provide Canadians with a window into what lies at the root of terrorism and the obstacles in Israel’s quest for peace: the Palestinian glorification of terror, the incitement of violence and the refusal to accept the State of Israel.”

The embassy provided background information on seven Palestinian suicide bombers, hijackers and terrorism operatives presented in the exhibit as artists, writers and “leaders.”

The Jewish Federation of Ottawa and the Centre for Israel and Jewish Affairs called on the mayor to remove the “inappropriate” exhibit, which is “hurtful to the Jewish community and offensive to any peace-loving person, including non-Jewish Canadian victims of terror,” the federation said in a statement last week.

But the city advised the federation that it was unable to remove the exhibit, “citing deficiencies in its own selection process,” said Jewish Federation of Ottawa president and CEO Andrea Freedman.

In a statement to JTA, Steve Kanellakos, Ottawa’s deputy city manager, said, “To exhibit a work of art is not to endorse the work or the vision, ideas, and opinions of the artist. It is to uphold the right of all to experience diverse visions and views.”

Kanellakos added that “the artist’s works and the artist herself benefit from [Canada’s] protection of freedom of expression.”