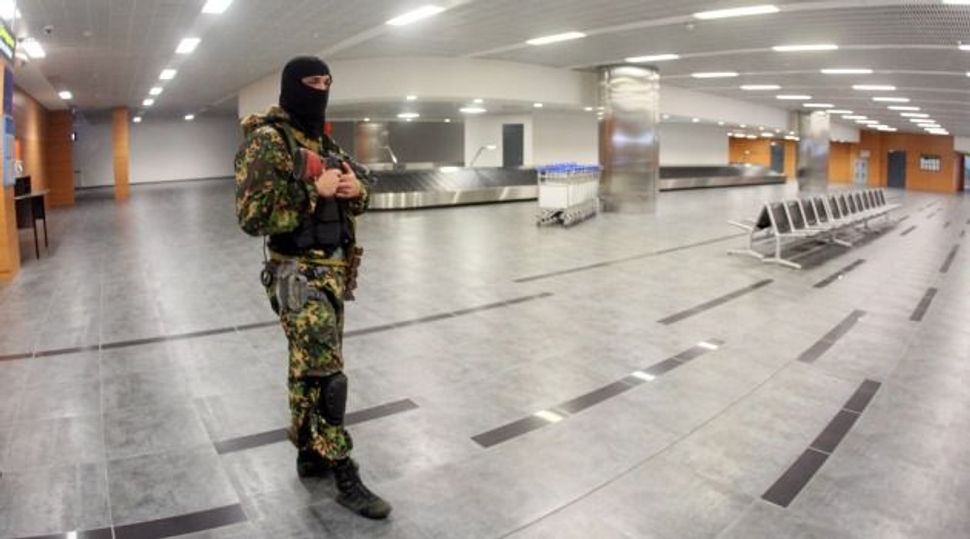 Chaos Reigns: Pro-Russia militant roams terminal in Donetsk Airport, where the Jewish Agency mounted a rescue operation to get two families awaiting aliyah to another city. Image by getty images

Israel’s Jewish Agency came to the rescue of two Jewish Ukranian families after rebels seized control of Donetsk airport as they were waiting to emigrate to Israel, an agency spokesman said on Tuesday.

The two families, numbering six people, were stranded at the airport when it was shut down on Monday. The agency then launched a “fast-paced operation, spokesman Avi Mayer said.

The families were driven to the Ukrainian city of Dnepropetrovsk then flown to Kiev where they boarded a plane for Tel Aviv, Mayer said. He gave no further details.

The Jewish Agency handles relations with Jews around the world and cooperates with Israel’s Immigration Ministry.

Jewish immigration from Ukraine has more than doubled since the start of the year over 2013 figures, the agency said. Israel has seen 762 immigrants arrive from Ukraine between January and April, compared to 315 over the same period a year ago.

The agency is preparing to help facilitate the departure of more families from Donetsk should the hostilities there continue.

Agency chairman Natan Sharansky, a former Soviet disident who was born in Donetsk, said in a statement: “Due to the current situation in the country we have significantly expanded our activities, assisting those who wish to immigrate to Israel.”

An Israeli immigration official said some recent newcomers from Ukraine to Israel had flown in initially as tourists then asked for citizenship. Israeli law offers citizenship to any Jews who apply for it.

Sharansky himself was jailed for his human rights activities in the then Soviet Union and was freed in 1986 after nine years in prison as part of an East-West spy swap.