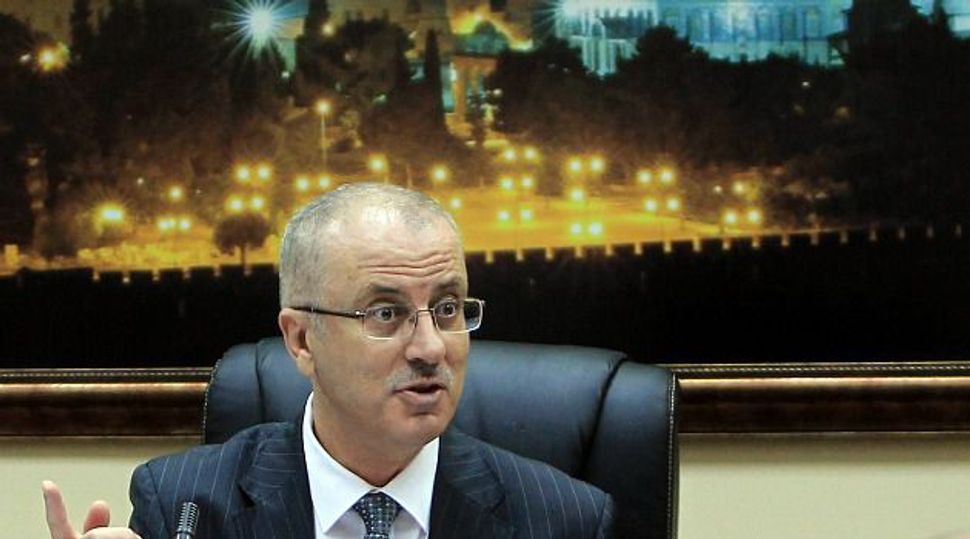 Congressional lawmakers from both parties said Hamas backing for the new Palestinian unity government could jeopardize of U.S. aid — although some dovish groups called for a wait-and-see approach.

The U.S. said it had no plans to adjust the $500 million aid package to the Palestinians over the deal to end the bloody rift that divided the West Bank and Gaza.

“The administration, in consultation with Congress, should initiate an immediate review of this new government,” Rep. Eric Cantor (R-Va.), the majority leader in the U.S. House of Representatives, said in a statement. “Until such time that it is determined that assistance to this so-called technocratic government is consistent with our own interests, principles, and laws it is incumbent on the Administration to suspend U.S. assistance.”

Rep. Nita Lowey (D-N.Y.), the highest ranked Democrat on the House Appropriations Committee, stopped short of calling for a funding review, but said the unity government endangered U.S. support for the Palestinian Authority.

“As long as Hamas rejects the Quartet principles and the existence of the State of Israel, United States funding for this unity government is in jeopardy,” she said, referring to precepts put in place in 2003 by the grouping — the United States, Russia, the United Nations and the European Union — that guides the peace process. The three Quartet precepts are, recognizing Israel, renouncing terrorism and abiding by past agreements.

“I still believe that the United States should continue its policy of promoting negotiations to achieve an independent state for the Palestinian people living side by side with Israel in peace and security,” Lowey said.

The Conference of Presidents of Major American Jewish Organizations supported congressional calls for reviewing aid to the Palestinians. “We urge the United States and other governments to be vigilant in their judgment of and dealings with the newly declared government,” the foreign policy umbrella of the Jewish community said in a statement. “We call on President Abbas to return to the negotiations with Israel and not engage in this charade.”

“We are disappointed that the U.S. has rushed to announce it will work with the new Palestinian unity government without first waiting to see if Hamas is going to commit to the Quartet conditions,” Foxman told JTA.

J Street, a liberal Jewish Middle East policy group, also called for a review of the new government’s policies, condemning Gaza Prime Minister Ismail Haniyeh for recently calling on Palestinians to “pursue the choice of resistance.” The group, however, urged caution and suggested benefits could accrue should the new Palestinian government prove to be committed to the peace process.

“The Obama administration and Congress should review the composition and policies of the new government to ensure they are in line with U.S. law,” its president, Jeremy Ben-Ami, said in a statement. “It would be a mistake for either the United States or Israel to take rash punitive actions against the Palestinians that will only hurt their own interests and set back hopes of resuming peace negotiations.”

Americans for Peace Now said the new government should be assess by its actions, and could ultimately advance the peace process. “Such unity is vital for empowering the Palestinian leadership to credibly conduct negotiations with Israel and to reliably implement a future peace agreement,” it said in a statement.

In tough language rare for an Israeli diplomat in Washington, Israeli ambassador Ron Dermer said Israel was ‘deeply disappointed’ in the State Department’s decision to continue dealing with the Palestinian Authority now that it has Hamas support. “Israel is deeply disappointed with the State Department’s comments today on the Palestinian unity government with Hamas, a terrorist organization responsible for the murder of many hundreds of Israelis, which has fired thousands of rockets at Israeli cities, and which remains committed to Israel’s destruction,” Dermer said in a Facebook posting.

Palestinian Authority President Mahmoud Abbas on Monday swore in a government of technocrats that has the backing of his Fatah Party, which is preeminent in the West Bank, and Hamas, the U.S.-designated terrorist group governing the Gaza Strip. He said the new government would abide by peace agreements and recognize Israel, although Hamas continues to reject both these precepts. U.S. law bans funding for any designated terrorist groups.

State Department spokeswoman Jen Psaki said at the daily briefing for reporters that the United States would continue to deal with the new government and that funding would continue.

Dermer in his statement suggested that the technocrats provided cover to terrorists.

“This Palestinian unity government is a government of technocrats backed by terrorists, and should be treated as such,” he said. “With suits in the front office and terrorists in the back office, it should not be business as usual.” Israeli envoys rarely publicly rebuke U.S. administrations.

The Security Cabinet of Israeli Prime Minister Benjamin Netanyahu, who last month formally suspended peace negotiations with Abbas in part because of the announcement that governance talks with Hamas were underway, reiterated that posture in a unanimous vote Monday and said in a statement that it would consider sanctions against the Palestinian Authority.