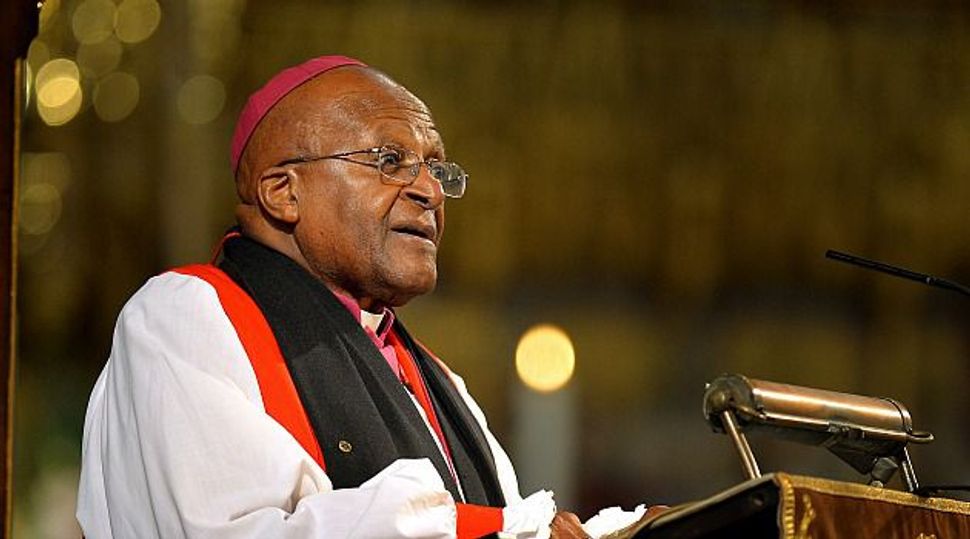 Representatives of the Centre for Israel and Jewish Affairs, or CIJA, met Tutu May 27 in Toronto, where he was attending an international gathering of the Order of St. John, the Canadian Jewish News reported.

Shimon Fogel, CEO of Centre for Israel and Jewish Affairs, said the meeting focused exclusively on the Arab-Israeli conflict and gave CIJA the chance to express its dismay at Tutu’s anti-Israel statements over the years.

“We characterized his views as deeply hurtful and harmful to the one state in the region in which the Christian community can practice their faith free of the kind of intimidation, threats and persecution that exist elsewhere,” Fogel told the newspaper.

Fogel said Tutu was “entirely unrepentant and unapologetic,” and showed no willingness to amend his position.

“He was not accepting of the suggestion that [these views] would benefit from additional considerations, for example … that Israel’s legitimate security concerns gave rise to checkpoints, the security barrier and the like.”

B’nai Brith Canada was not approached about meeting with Tutu, the group’s CEO, Frank Dimant, told the Canadian Jewish News. “Anyone who has the kind of opinions vis-à-vis the State of Israel is not someone we want to engage in conversation, nor would our grassroots Jewish supporters be in favor of us meeting with him,” Dimant said.

But writing in B’nai Brith’s publication, the Jewish Tribune, Dimant said his organization “refused” to meet with Tutu.

“One need only look at the record of Archbishop Desmond Tutu to see that he is clearly not a friend of Israel or the Jewish people,” Dimant said there in a statement.

He said CIJA “had every right” to meet Tutu, adding that “we’re just saying that we chose, in representing our constituency, not to meet with him.”