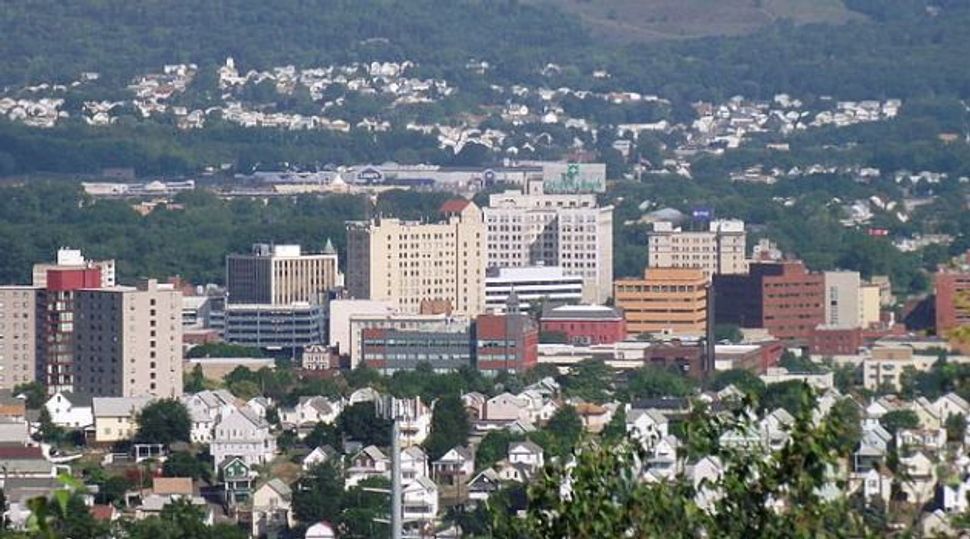 (JTA) — There once was a time when the Jewish community in this Pennsylvania city just west of the Pocono Mountains was thriving.

That much is clear from a quick tour. The sanctuary at the local Orthodox synagogue, Ohav Zedek, seats nearly 1,000. Temple Israel, the Conservative shul, has two huge buildings — a hulking sanctuary and a three-story school. There’s a Jewish day school, a JCC with its own bowling alley and a Reform synagogue with multiple sanctuaries.

But there’s also ample evidence that the Jewish heyday is long gone.

At the JCC, the six-lane basement bowling alley went dark years ago, shoes and balls sitting in their places as if frozen in time. Mold is growing on the ceiling at the four-lane indoor pool, and though there’s a lifeguard and it’s mid-afternoon, nobody is swimming.

The day school, United Hebrew Institute, left its 17,000-square-foot building in 2010 for a smaller space in the JCC. Now down to just six students and with its endowment gone, the school will cease operations later this month.

Most Saturdays, fewer than 20 of Ohav Zedek’s 940 seats are occupied. At the Conservative synagogue, the daily minyan has been trimmed to three days a week; the average congregant is over age 60.

Yet the Jewish federation here is about to launch an audacious new fundraising campaign to raise $6 million for the construction of an $11 million Jewish community campus.

The planned Center for Jewish Life, located about a mile away from the JCC and just across the Susquehanna River in Kingston, will house a new JCC, the federation and Temple Israel’s offices and congregational school — to start. The hope is that other local Jewish institutions eventually will move in, too, making the consolidated site the hub of the Jewish community in Luzerne County.

This old mining city nestled in Pennsylvania’s Wyoming Valley is hardly the only shrinking Jewish community in America trying to figure out how to survive. But its plan for warding off its demise is quite unusual.

“It’s a very exciting project,” said Chuck Cohen, a dental products manufacturer who is a main backer along with local businessmen Paul Lantz and Rob Friedman. The three purchased the 13-acre property on Third Avenue in Kingston several years ago after a Price Chopper supermarket there closed down and the site went into bankruptcy.

In their view, the new campus is a one-size-fits-all solution. The old JCC is expensive to maintain, lacks ample parking and a regulation-size pool, and would cost $4 million to upgrade. A new JCC, they say, can attract and retain new members.

Other Jewish institutions in town — notably, the synagogues — also are in aging structures that are expensive to maintain and ill suited to the diminished size of their constituencies, the project’s backers say. Putting those institutions into smaller spaces in a modern facility would reduce maintenance costs and make more sense in the long term, they argue.

“We think it works if the community gets smaller or gets larger,” Lantz said. “Putting in more money will help us operate more profitably and attract people into town. And even if we continue to shrink for a while, it will be more affordable to the community.”

But not everyone in town thinks it’s a good idea to spend millions building a new Jewish campus for a shrinking community.

“What do we need a new one for?” said Shirley Schoenholtz, a longtime community member who works at the JCC. “We got a pool, we have a gym. It’s perfectly fine. I’m happy here.”

“It’s hard for me to see how it’s going to work,” Nemetsky said. “Outside of a temporary blip, sustainability is not dependent on how nice the facility is and how much programming there is. I don’t think that’s the staying power of the Jewish community.”

It would be better to spend money to help attract businesses to the area that would employ Jews, he said. Cohen acknowledges that even if the Jewish campus is a success, Wilkes-Barre Jewry is unlikely to grow. But he’s not only thinking about serving Wilkes-Barre’s Jews.

“The model we’re pursuing is the Hebrew National model: We’ve got kosher hot dogs, but not all our members purchasing hot dogs are Jewish,” Cohen said. “I think it will always be a JCC with Jewish programs, but it will also attract people from outside the community.”

The planners envision remodeling the old Price Chopper building into a JCC and adding a swimming pool and basketball courts. The offices of the federation and Jewish Family Services, which formally merged with the JCC in January 2013 to become the Jewish Community Alliance of Northeastern Pennsylvania, will be onsite. Chabad’s growing cheder school, currently a tenant of the JCC, will move to the new site, too.

The architectural plans, which are not yet finalized, are designed to leave flexibility so other institutions can join (and build at their own expense) later. So the day when Temple Israel decides it cannot afford to keep its 525-seat sanctuary, for example, the shul can sell its building and build a smaller sanctuary on the campus. Because it will be attached to the JCC, there won’t be a need to build supplementary facilities such as bathrooms, a kitchen or meeting rooms.

“We’re not a growing community. We’re vibrant, we’re engaged, but we’re an aging community with aging infrastructure and an aging population,” Cohen said. “The question is, how can we build an infrastructure for the community to thrive? We believe this could be a model for many communities going forward.”

Temple Israel is the only other institution that has committed to join the new site. And even Temple Israel is moving only its administrative offices and twice-a-week Hebrew school, not the synagogue itself, and the move is being done on a three-year trial basis.

“At this point, we’re going to see how things go in the new setting; we’re not going to sell the school building,” said Rabbi Larry Kaplan of Temple Israel. “And we’re going to keep our davening in the sanctuary of our historic building in Wilkes-Barre.”

But Rosemary Chromey, the synagogue’s president, suggested that the day might come when a diminished congregation would move, too.

“Temple Israel as a congregation will be around hopefully forever, but maybe not at the current location,” she said. “There’s always the possibility that you need to downsize 50 years from now if the community shrinks.”

With an eye toward that same fate, even the leaders of the other Jewish institutions in town that have rejected the move for now aren’t ruling it out for the future.

“Right now we really like our building,” said Rabbi Roger Lerner of Temple B’nai B’rith, a 168-year-old Reform congregation in Kingston. But, he added, “if we need to move in 20 or 30 or 40 years, it’ll be there.”

Jews aren’t the only demographic struggling in Wilkes-Barre. The city’s population is less than half what it was in the 1930s, the population of Luzerne County is in decline and the unemployment rate in the Scranton-Wilkes-Barre area is roughly 15 percent above the national average — and the highest among Pennsylvania’s 14 largest markets.

The city’s most severe blow came in 1972, when Hurricane Agnes caused the Susquehanna to overflow, flooding Wilkes-Barre’s downtown in 9 feet of water and damaging or destroying 25,000 homes and businesses. Like many other structures in the city, Jewish institutions were renovated after the flood and in many cases updated since — making it more difficult to convince them to abandon their current locations and join the new campus.

“For me what’s really important is being able to keep your identity and not lose it in another institution,” Lerner said. “As nice as it would be to join the campus, I think for us here it’s important to have a little separation.”

Ohav Zedek is the more likely candidate for a move. Most of its regulars already live in Kingston and hold a Shabbat minyan in a private home there because it’s too far to walk to Ohav Zedek in Wilkes-Barre. Talks are serious enough that the two sides have discussed design specifications that would enable Orthodox Jews coming to pray on Shabbat to avoid having to walk past a parking lot in use for the JCC, which is expected to be open on Saturdays.

The new campus is still not a done deal. The sponsors say they need to raise 80 percent of its $6 million fundraising goal before starting construction. That’s a tall order in a town where the federation’s annual campaign typically brings in about $500,000.

The balance of the $11 million or so (precise costs have yet to be finalized) will come at no cost to the community: The three families that purchased the new site, now valued at $2 million, will donate it, more than $1 million in state gambling funds has been secured, and an additional $1 million is expected from the sale of the current JCC building.

Parts of the new campus may also be rented out to other tenants or sold off. If Wilkes-Barre’s Jews don’t get started on the project now, Temple Israel’s Kaplan says, they won’t be able to build it later.

Cohen says the new campus is a matter of survival.

“We’ve looked at the models of communities that go out of business,” Cohen said. “We do not want to be a community that dies off.”