Over 25,000 Gather at Western Wall To Pray for Kidnapped Teens 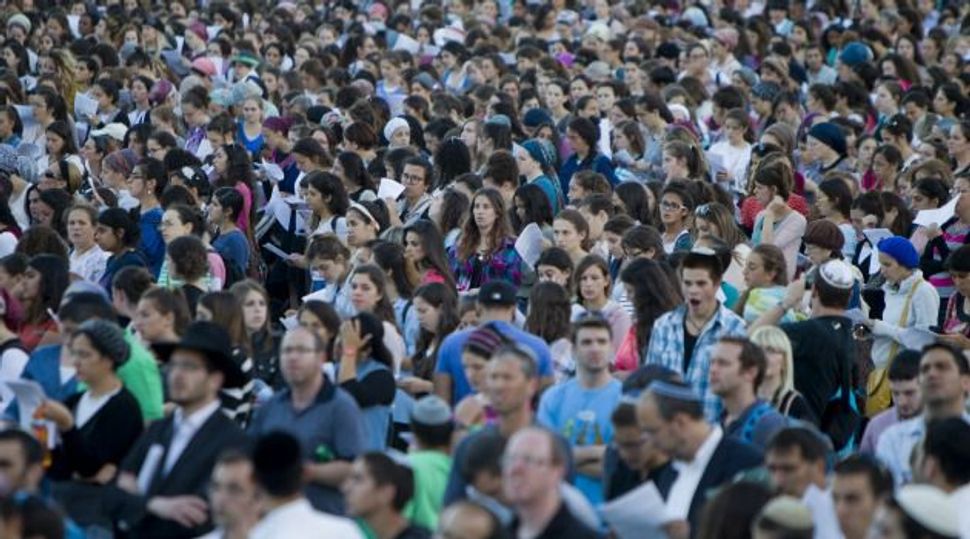 Strength in Numbers: Thousands of Jews gather for a mass prayer for the release of three Jewish teenagers believed to be kidnapped in the West Bank. Image by Getty Images

Thousands gathered at the Western Wall to pray for the safe return of three teens kidnapped in the West Bank.

More than 25,000 people attended the Sunday evening service led by Chief Rabbi David Lau. Chief Rabbi Yitzhak Yosef also was at the service, as were members of the Chief Rabbinate council and Knesset members.

“We prove to our enemies that the nation of Israel is alive and will never be broken,” Lau said at the service. “Everyone gathered here at the Kotel as one, with one heart, unified in a prayer for the safety of the kidnapped, that they will be swiftly returned to their families.”

Meanwhile, a Facebook page dedicated to the return of the teens, Bring Back Our Boys, has garnered more than 64,600 likes since its establishment on Friday.

The three Israeli teens, including one dual Israeli-American citizen, have been missing since Thursday night. They were last seen trying to get rides home from a yeshiva high school in Gush Etzion, a bloc of settlements located south of Jerusalem.

The missing teens were identified Saturday as Gilad Shaar, 16, from Talmon; Eyal Yifrach, 19, from Elad; and Naftali Frenkel, 16, from Nof Ayalon, the American citizen.

Meanwhile, it was cleared for reporting by the military censor on Sunday evening that one of the kidnapped teens had made a call to the police moments after the kidnapping, at approximately 10:30 on Thursday night. The teen reportedly whispered “We have been kidnapped!” before the call was disconnected.

Police did not report the suspected kidnapping to the military until about 4 a.m.

Over 25,000 Gather at Western Wall To Pray for Kidnapped Teens